Israelis in Qatar Jarred by Hostile Reception from Fans, Residents 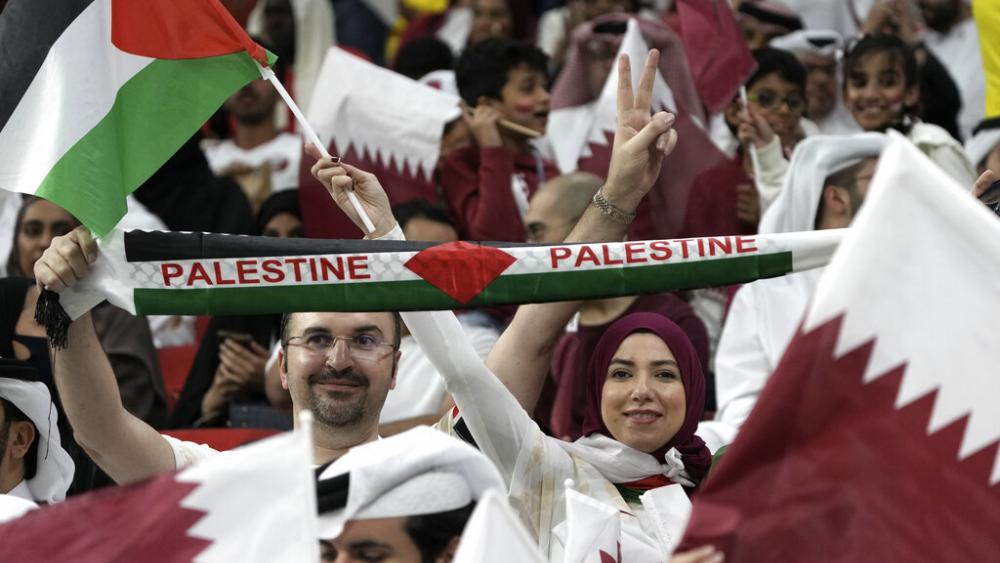 Fans wave the Palestinian flag and cheer prior the World Cup, group A soccer match between Qatar and Ecuador at the Al Bayt Stadium in Al Khor, Sunday, Nov. 20, 2022. (AP Photo/Ariel Schalit)

JERUSALEM, Israel – Before the FIFA World Cup soccer championships began in Qatar 10 days ago, Israelis were optimistic that the event could break cultural barriers in sports and within the Muslim world at large. After all, the government in Doha allowed direct flights from Israel and was even setting up a Kosher kitchen to accommodate Jewish tourists.

Qatar is the first Muslim country to host the world cup, and although protests against the Gulf nation's funding of terrorism and other issues were prevalent before the games. Kan, Israel's public broadcaster, built an entire studio to cover the matches in Doha despite the Israel team's failure to qualify for the final 32 teams. In the afterglow of the Abraham Accords and given Israel's passion for soccer, it seemed like a solid decision.

Since then, the talk of Kosher kitchens has given way to darker accounts. The Associated Press describes an incident before the matches began when an Israeli Kan journalist was wandering through the venue and found a Qatari man in a traditional headdress and white robe, and approached him for an interview:

"Which channel?" the Qatari asked.

The journalist replied he was from Kan, Israel's public broadcaster.

The Qatari was stunned. “Where?”

“Israel," the journalist repeated. A split-second later, the interview was over.

The Jerusalem Post published accounts of other incidents in which a Saudi fan shouted at Kan's Foreign Affairs correspondent Moav Vardy, telling him, “You are not welcome here. This is Qatar. This is our country. There is only Palestine; no Israel.”

Arabs harass Israeli journalists from “Kan 11” as they attempt to cover the FIFA World Cup in #Qatar2022 #Antisemitism #Qatar pic.twitter.com/QDK91R02uS

The Post also recounted the time when former Israeli soccer star and broadcaster Eli Ohana told a Qatari policeman who was driving his golf cart that he was from Israel, the officer asked if he was joking. Ohari then told him he was really from Portugal so there wouldn't be trouble. The officer told him if he were Israeli he would have refused to drive him.

Raz Schechnick, World Cup reporter in Doha for the Israeli dailyYediot Ahronot, tweeted, "We didn't want to write these words, we are not the story here. but after ten days in Doha, we cannot hide what we are going through. We are feeling hated, surrounded by hostility, not welcomed."

On Sunday, according to  I24 News, Israel's Headquarters for Combating Terrorism urged Israelis to stay away from Qatar due to possible security threats.

"Although no travel ban has been issued, Israelis are not recommended to fly to the Gulf state that doesn’t have official relations with Jerusalem. Following daily situation assessments based on accounts of Israelis who experienced hostility from the locals and Arab fans from other countries, Qatar was given a level 3 warning, which is one level below enemy countries like Lebanon, Iran, Syria, Yemen and Iraq," the I24 News report noted.