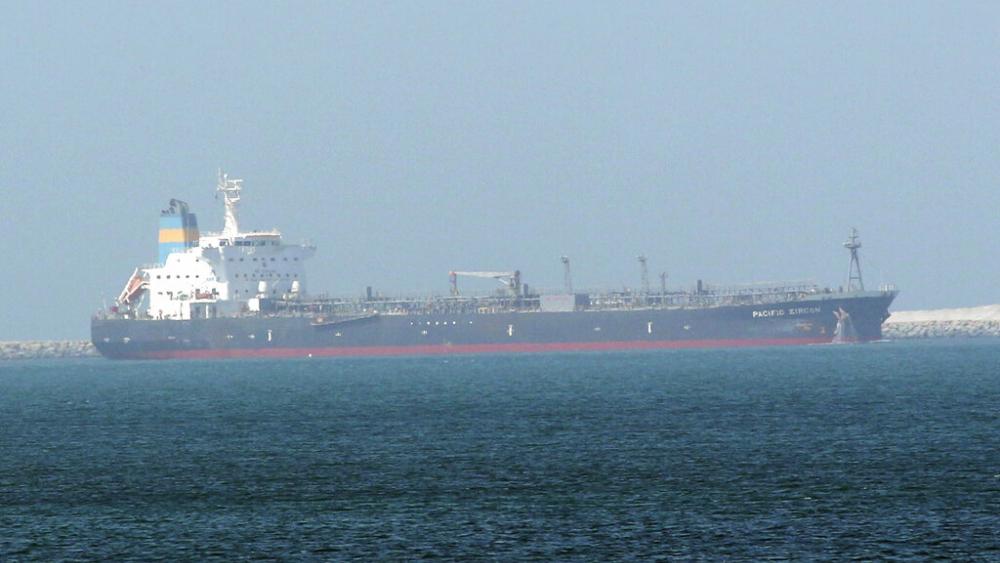 An oil tanker associated with an Israeli billionaire has been struck by a bomb-carrying drone off the coast of Oman amid heightened tensions with Iran. (AP Photo/Nabeel Hashmi)

DUBAI, United Arab Emirates (AP) — An oil tanker associated with an Israeli billionaire has been struck by a bomb-carrying drone off the coast of Oman amid heightened tensions with Iran, an official told The Associated Press on Wednesday.

The attack on the Liberian-flagged oil tanker Pacific Zircon happened Tuesday night off the coast of Oman, the Mideast-based defense official said. The official spoke on condition of anonymity as they did not have authorization to discuss the attack publicly.

The United Kingdom Maritime Trade Operations, a British military organization in the region monitoring shipping, told the AP: “We are aware of an incident and it’s being investigated at this time.”

The Pacific Zircon is operated by Singapore-based Eastern Pacific Shipping, which is a company ultimately owned by Israeli billionaire Idan Ofer.

In a statement, Eastern Pacific Shipping said the Pacific Zircon, carrying gas oil, had been “hit by a projectile” some 150 miles (240 kilometers) off the coast of Oman.

“We are in communication with the vessel and there is no reports of injuries or pollution. All crew are safe and accounted for,” the company said. “There is some minor damage to the vessel’s hull but no spillage of cargo or water ingress.”

A call to the Israeli Embassy in Abu Dhabi rang unanswered. Israel's prime minister office and its defense ministry declined to comment.

Oil prices rose slightly as news of the attack spread, with benchmark Brent crude trading above $94 a barrel.

While no one immediately claimed responsibility for the attack, suspicion immediately fell on Iran. Tehran and Israel have been engaged in a yearslong shadow war in the wider Middle East, with some drone attacks targeting Israeli-associated vessels traveling around the region.

The U.S. also blamed Iran for a series of attacks occurring off the coast of the United Arab Emirates in 2019. Tehran then had begun escalating its nuclear program following the U.S.' unilateral withdraw from its atomic deal with world powers.

Iranian state media did not immediately acknowledge the attack on the Pacific Zircon. It wasn't immediately clear where the vessel was Wednesday. Satellite-tracking data from late Tuesday provided by MarineTraffic.com put the vessel deep in the Arabian Sea after leaving the Omani port of Sohar.

Since the collapse of Iran's nuclear deal, nonproliferation experts warn the Islamic Republic now has enough enriched uranium to make at least one nuclear weapon if it chose, though Tehran insists its program is peaceful.

Iran also has been lashing out at its perceived enemies abroad amid monthslong nationwide protests now challenging its theocracy.

Torbjorn Soltvedt, an analyst at the risk intelligence company Verisk Maplecroft, said the attack “does not come as a surprise.”

“The risk of attacks against shipping and energy infrastructure in the wider region is rising mainly due to the lack of progress in U.S.-Iranian nuclear diplomacy and the decision by the Washington to apply further sanctions pressure on Iran,” he said. “Since 2019, Iran has consistently responded to new U.S. sanctions with covert military action in the region.”

He added: “There is not just an increasing risk of disruptive attacks against energy infrastructure in the region, but also a growing risk of a wider military confrontation with more serious consequences for world energy markets."

The oil tanker attack also comes comes just days ahead of the FIFA World Cup in Qatar. While Doha maintains good relations with Tehran, with whom it shares a massive natural offshore natural gas field, Israelis will be attending the tournament. Iran's national team also will face Britain and the U.S. in first-round matches, two countries it accuses of fomenting the unrest.