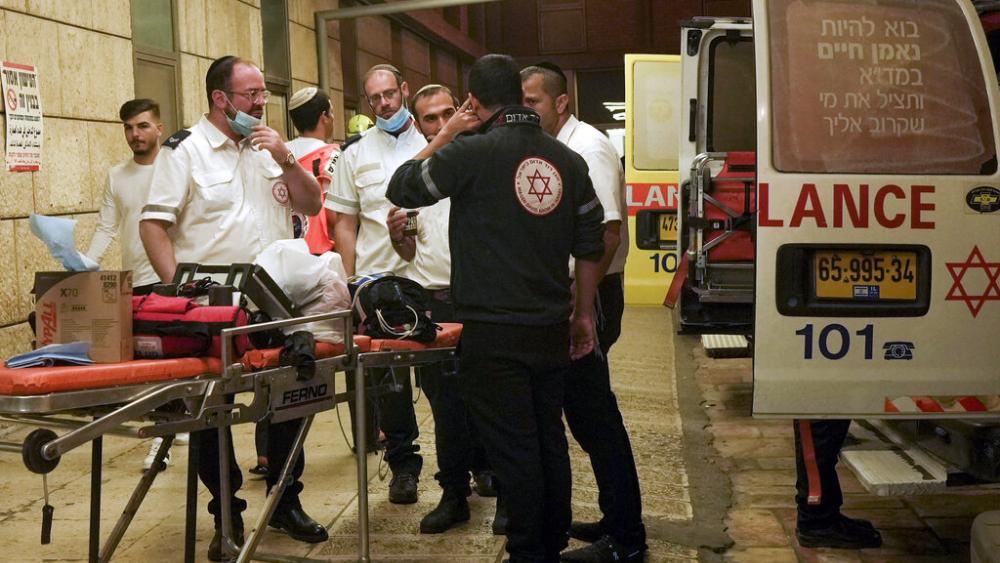 Paramedics gather at a hospital in Jerusalem on Saturday, Oct. 29, 2022, after they evacuated wounded form a shooting attack. (AP Photo/Mahmoud Illean)

JERUSALEM, Israel – A terrorist attack near the biblical city of Hebron Saturday night left one Israeli man dead and three others wounded, including a medic who tried to help the victim. The drive-by shooting occurred at a grocery store near the home of controversial Religious Zionist Party co-leader Itamar Ben-Gvir.  The son of the victim, Ronen Hanania, says he watched his father die after he was struck by a car and then fired upon by the occupants near the entrance to the Jewish community of Kiryat Arba.

The medic, Ofer Ahana, underwent two successful surgeries in a hospital near Jerusalem. An off-duty soldier shot and killed the suspected terrorist, Muhammad al-Jabari, a member of the Hamas-affiliated al-Qassam Brigades. The Israeli Defense Forces are preparing to demolish the suspect's home.

With Israel's elections just two days away, the shooting aftermath was inflamed by Merav Michaeli, Labor Party leader and transportation minister in the current government. She suggested at a Saturday Tel Aviv rally honoring the late Prime MInister Yitzhak Rabin (who was assassinated by an Israeli in 1995), that Former Prime Minister Benjamin Netanyhu and Ben-Gvir had responsibility for the climate that led to Rabin's death.

Ben-Gvir reacted angrily on Sunday to Michaeli's statement, as well as the suggestion that he was taking advantage of the terrorist attack so near his home.

Israel National News reported on his remarks."They shot at my house. We (his family) heard the bullets whistling," Ben-Gvir said. "They come up with this narrative that Ben-Gvir is taking advantage of this event. Does this mean that the assassination squad was also a lie? Stop it," he added.

Ben-Gvir's home in Kiryat Arba is not far from the biblical Tomb of the Patriarchs in Hebron, where Abraham, Isaac, and Jacob are buried. It is heavily populated by Arabs, and has periodically been the scene of great unrest and killings for almost a century.

Israel's President Isaac Herzog said he was shocked by the attack, and IDF Chief of Staff, Lt.-Gen. Aviv Kohavi, toured the scene of the shooting Sunday, fortifying the surrounding area with extra security.  Hours after the attack, shooters from a nearby Palestinian village opened fire on Israeli troops. No injuries were reported.