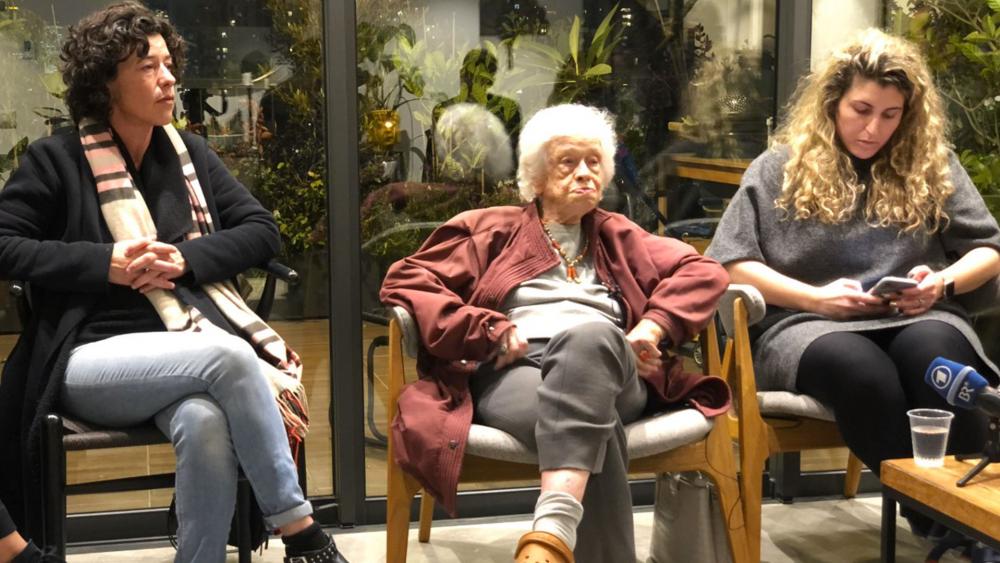 TEL AVIV, Israel  – As time goes on, fewer and fewer Holocaust survivors remain to tell their stories of hardship at the hands of the Nazis, and their endurance afterwards.

One Israeli initiative is teaching the younger generation this history with an up-close and personal approach. It's called Zikaron BaSalon  – “Living Room Remembrance” – and it's become a powerful way for Holocaust survivors to tell their stories directly to young people, carrying a longer-lasting impact.

Sharon Buenos is the global director for Zikaron BaSalon. She told us it is "a social initiative commemorating the Holocaust, connecting between Holocaust survivors and the younger generation in a small, intimate setting."

Recently, Buenos invited about 20 international journalists to her apartment to experience this approach for themselves.

"About 11 years ago, a group of young Israelis wanted to commemorate the Holocaust in a different way," she explained. "They found that the traditional way of ceremonies was no longer enough, and they were looking for new meaning for the Holocaust National Remembrance Day. They gathered in one home. They invited a Holocaust survivor. And it was a very unique experience."

Hanna Malka is one such survivor. Born in 1923, she clearly remembers as a 16-year-old when Nazi Germany took over her home country of Czechoslovakia in just one night.

"So, at the time it was the best democracy in all Europe," Hanna recalled. "And we knew what happened in Germany, but we never thought that Hitler will try to come to a democratic land. Then one morning before I went to school, I opened the radio and I heard the president say, be all of you, quiet. Don't fight, don't do anything. The Germans occupied Czechoslovakia."

In Prague, in the Czech capital’s Jewish Quarter, life continued for two-and-a-half years. Then, in November 1941, Adolph Hitler said he was giving the Jews a city and began transporting them to the Theresienstadt ghetto.

"All the Jews came to this place and instead of 6,000 people," Hanna remembered, "We were 50,000 people. So you can imagine how full it was… I was living in a flat of (a) Czech family. So, we were about 70 people in a two-room flat and with one (toilet) and with one place to wash themselves."

The true intention for Theresienstadt was as a transit station for sending Jews to concentration camps.

Hanna continued,"There were always transports.  All these people came, and all people (went) away. But we didn't know where they go because we had no idea that there is a place like Auschwitz. We just felt that this must be something worse than Theresienstadt….There were the little children there, and the children were not with their parents. and we hope that the children are our future, that at least if we won't survive, the children will survive."

The Nazis also used Theresienstadt as propaganda, calling it the "spa town" to conceal the true purpose of the concentration camps.

"They made it very beautiful because there should come a commission of the Red Cross. So they made everything, you know, there were flowers suddenly, and there was a coffee house. And there were people – two people living in a room– not 50," Hanna told us. "And the Red Cross came and they said it's not necessary to go to Auschwitz because it's probably, everything what they say about Auschwitz, is just the same as what they say about Theresienstadt."

The Nazis eventually sent Hanna and other children to Auschwitz in Poland, forcing them to travel in a dark cattle car for days, without food or water. Hanna was among 200 girls who were then sent to Germany. They spent the rest of the war as maids or working in factories for the Germans.

"We never, never believed that we would come, living, out of it," Hanna recalled excitedly.

In 1946, Hanna came to pre-state Israel. Like many survivors, she didn't share her story for years. Later, she felt the need to speak out when she saw how people nowadays often treat each other.

"When I hear how people (belittle each) other, it just hurts me because in Theresienstadt (it) was so hard, and we had nothing to eat and nothing to do. You never stole from someone, and you never did something bad. In the opposite, when someone need help, you always helped him," she explained.

Participants in the BaSalon experience also have the opportunity to share their thoughts and ask questions.

Jan Christoph from Germany's ARD Radio remarked, "What I like is you are not trying to tell us only the horror, but also positive stories. I like your sense of humor."

"You said you went back to Germany as well, right?, Christina Storz of the German Press Agency (DPA) asked.

Hanna replied, "For a long time, I didn’t want to go to Germany, but after that I said it’s silly because there were good Germans, too."

Buenos, the program director, asked, "What is the message that you want everyone here to leave here today?

Zikaron BaSalon is now in two million homes in 65 countries, with private individuals hosting evenings like the one with Hanna in Tel Aviv.

"The Holocaust is not only the story of the Jewish people," Buenos said. "I think all of us should carry that torch of remembrance and carry a testimony with us."

The director's hope is that one day, six million homes will light a light to remember each victim of the Holocaust.