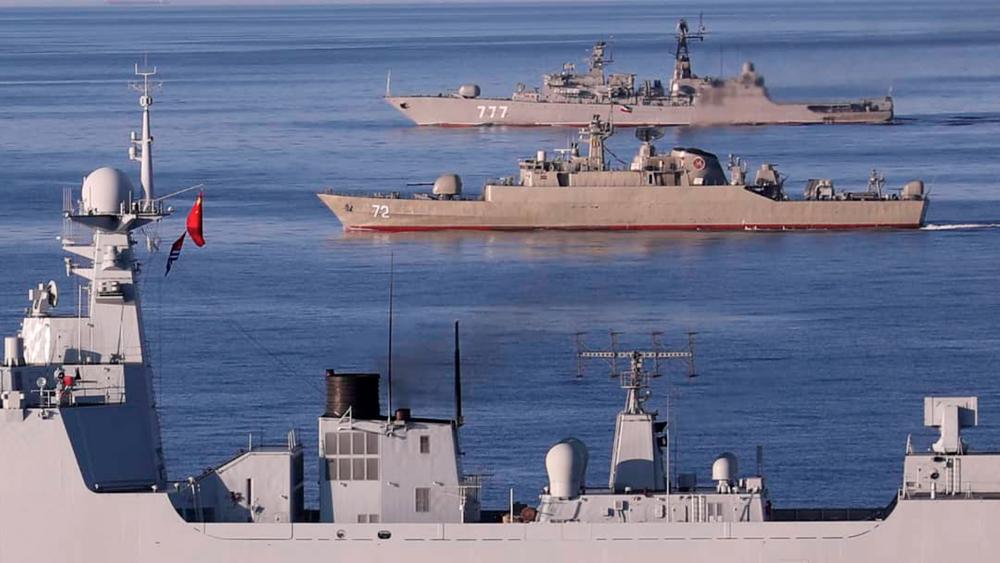 In this photo provided Saturday, Dec. 28, 2019, by the Iranian Army, warships sail in the Sea of Oman during the second day of joint Iran (Iranian Army via AP)

Iran, Russia, and China held joint naval drills in the Indian Ocean and Gulf of Oman this weekend.

The Gulf is particularly sensitive because it connects to the Strait of Hormuz through which about one-fifth of the world's oil passes.

Since May, there's been trouble in the Gulf.  The US reports Iran has attacked six oil tankers and downed a US drone. It also sent cruise missiles and drones to attack a Saudi oil field and seized control of a vessel flying a UK flag.

The four-day drill comes as Tehran is seeking to boost its military cooperation with Beijing and Moscow in the face of economic sanctions from Washington.

"The fact that we are now hosting these powers (Russia and China) means that our relations have reached a significant point, and god-willing it will have global outcomes, and its message is peace and friendship in the light of unity and responsible collective cooperation," Iranian deputy navy commander Gen. Gholam Reza Than said.

"The message of this exercise is peace, friendship and lasting security through cooperation and unity…and its result will be to show that Iran cannot be isolated," Iranian R. Adm. Gholamreza Tahani was quoted as saying.

But one Israeli analyst said the message Iran wants to send is that US sanctions aren't working.

Jerusalem Post journalist Seth J. Frantzman said one of the messages Iran wants to convey is that the joint drill shows they have powerful allies and that Iran still presents a serious military threat.

"(Iran) wants friends in India, China, and Russia and to displace the role of the US.  It accomplishes this through official initiatives like this naval drill but also through other means, such as its clandestine activities to sabotage ships in the Gulf, to have proxies fire rockets at US personnel in Iraq, by showing it can down a US drone or that it can fire rockets at Israel, a key US ally," Frantzman wrote in an analysis in the Jerusalem Post.

According to Frantzman, Iran wants to symbolically show the "the US is no longer a global hegemon."