'The World's Most Dangerous Paper Route': How a Documentary Helped Save the Iconic 'Stars and Stripes' Newspaper 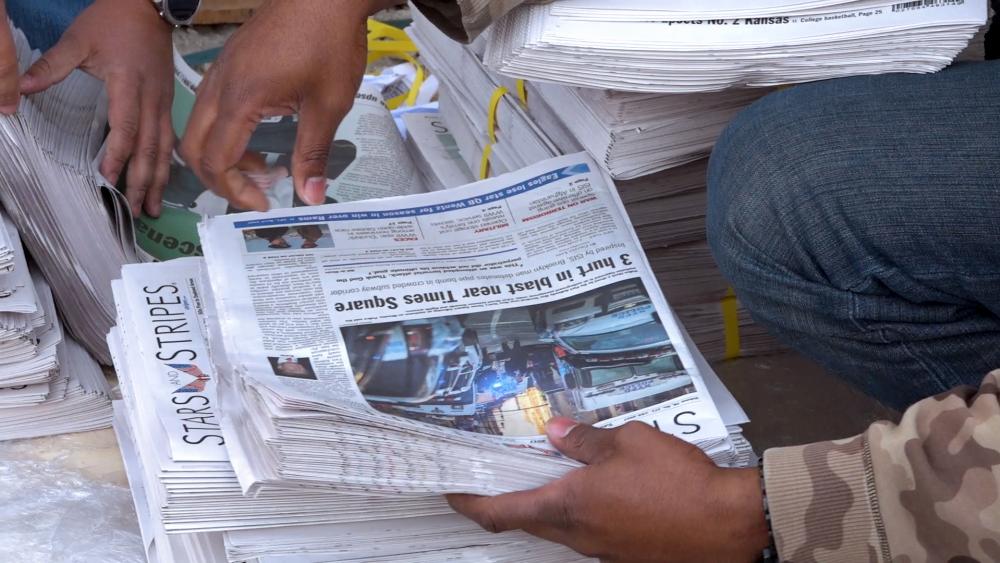 6204191417001
'The World's Most Dangerous Paper Route': How a Documentary Helped Save Iconic 'Stars and Stripes' Newspaper

"Stars and Stripes" has been the newspaper of record for the US military for more than a century. A question of money recently put the continuation of that legacy in jeopardy. Now, a filmmaker hopes his documentary on Stars and Stripes will become more of a call to action.

When Steven Barber first came up with the idea for his film, The World's Most Dangerous Paper Route, he believed it would be wildly popular especially among service members worldwide. He did not expect it to play a role in keeping the newspaper's presses printing.

"It's about being connected to home because these guys a lot of time once they're gone, they're gone they can't make phone calls they can't send emails and all they have is Stars and stripes," Barber told CBN News.

Barber says he has made several military-themed films but admits this one is his favorite.

Told in documentary style, The World's Most Dangerous Paper Route focuses on the 150-year-old Stars and Stripes and its stories from the battlefield. It's a harrowing and even deadly task for journalists. Something former Stars and Stripes war reporter Linda Rouch knows all too well.

"When you see that, you're…" Rouch paused as she became emotional.  "Sorry...it's just hard for me to go back."

Every single day the paper is distributed to US military installations all over the world, including Middle East places like Kuwait, Iraq, Bahrain, Qatar, and Saudi Arabia. Hence the title of the film was suggested to Barber by one of the paper's reporters.

"And he just looked at me and he said 'I got the great, great title mate!" Barber said. "We'll call it the world's most dangerous paper route.' I'd love to tell you I came up with the title but I didn't. And that was what really blew my mind," Barber continued. "It's not very often that you get a title that draws you in immediately."

Little did Barber know that during production, the Defense Department would plan to stop publishing the paper, moving its $15 million budget to other areas.

A group of bi-partisan lawmakers lobbied to save it, however, including South Carolina Senator Lindsey Graham who is a veteran and who participated in the film.

"When I went to Germany it was a big deal when the paper came," Graham said. "When I was in Iraq and Afghanistan it was a really huge deal.

"And [Graham] told me there's no way that this paper's going down," Barber said. "Not on my watch, I won't let it happen,' he said."

"Lindsey Graham got it to the White House and the President saw it."

And that led to a presidential tweet on September fourth: "The United States of America will not be cutting funding to Stars and Stripes magazine under my watch. It will continue to be a wonderful source of information to our great military."

The Pentagon rescinded its order to stop the presses.

"Because anybody who would watch the film, there's no way they'd shut this newspaper down," Barber said. "People have died delivering this paper to the troops. I don't think any other publication in the world can say that."

Though the paper is still being published, for now, the question of its future funding remains. Lawmakers have indicated congress may directly fund the paper, though that line was not in its initial budget.  The World's Most Dangerous Paper Route is available on Amazon Prime.

While Stars and Stripes is part of the Department of Defense, it must earn most of its support, making support from readers vital.

To support the mission of Stars and Stripes, click HERE.