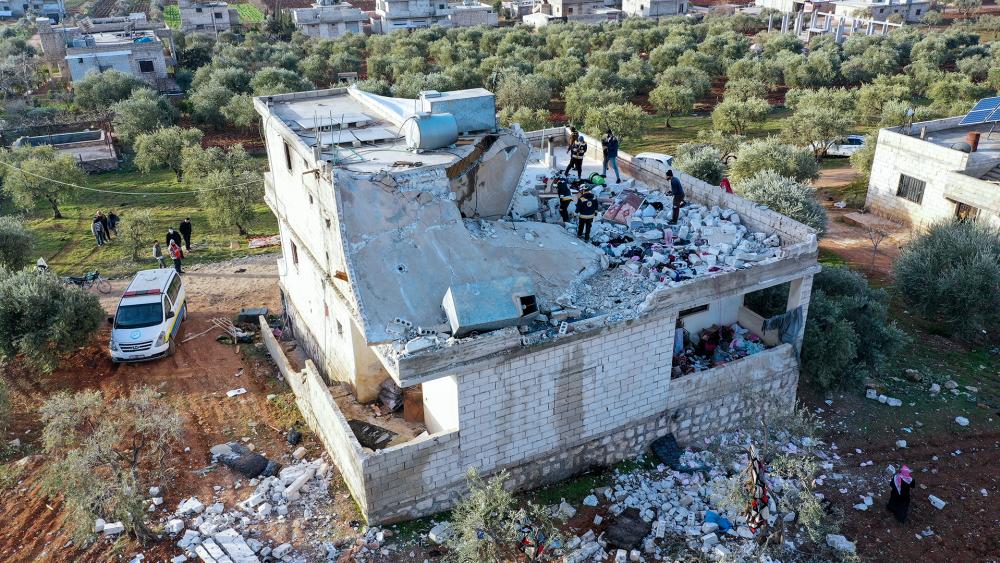 President Biden says the overnight raid by U.S. forces has killed a top Islamic State leader who had found safe haven in the Idlib region.

In a statement, the president said, "Thanks to the skill and bravery of our armed forces" the ISIS terrorist known as Abu Ibrahim al-Hashimi al-Qurayshi was "taken off the battlefield."

The counterterrorism raid reportedly involved U.S. forces flying in by helicopter to surround a house near the Turkish border. After a two-hour standoff, fighting broke out with rocket-propelled grenades and gunfire erupting from the house.

At one point an explosion rocked the structure. An American military official said the blast came from inside the house.

An anonymous U.S. official also said one of the helicopters in the raid suffered a mechanical problem and had to be blown up on the ground.

An eyewitness who went to the area after the battle saw a woman who had apparently detonated an explosive vest inside the building. Thirteen people, including women and children, reportedly died.

Pentagon Press Secretary John Kirby said the mission was a success with "no U.S. casualties."

It was the largest raid in the province since President Trump ordered the 2019 U.S. assault targeting the Islamic State leader Abu Bakr al-Baghdadi.

The covert operation came as the Islamic State had been regrouping and carrying out some of its biggest attacks since its regional stronghold was crushed in 2019.

ISIS has launched a series of attacks in recent days, including a 10-day assault to seize a prison in northeastern Syria. AP reports, "A U.S.-backed Kurdish-led force said more than 120 of their fighters and prison workers died in the effort to thwart the IS plot, whose goal appeared to free senior IS operatives from the prison. The prison houses at least 3,000 Islamic State group detainees."