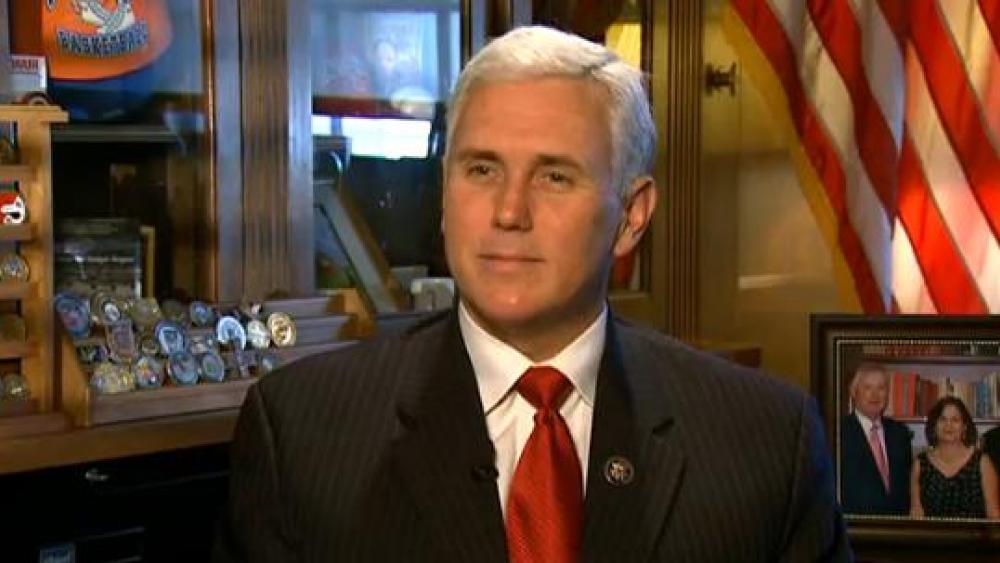 WASHINGTON -- After winning the Massachusetts Senate seat held by Ted Kennedy for nearly five decades, Republicans are on the political prowl.

Now, their biggest challenge will be closing their 78-seat gap in the U.S. House of Representatives.

One of the men responsible for leading the GOP charge is Rep. Mike Pence, R-Ind., who also serves as chairman of the Republican Conference.

His approach to life, family and work, he says, is simple.

"For me it all begins with faith," he told CBN News. "It begins with what matters most and I try and put what I believe to be moral truth first, my philosophy of government second, and my politics third."

Pence has been a member of Congress for nine years and is now the No. 3 Republican in the House. He's a darling of conservatives and has also become a favorite of Tea Party activists.

However, what many people probably don't know is that Pence began his political career as a Democrat, idolizing the legendary President John F. Kennedy.

"It may be that I grew up in a big Irish Catholic family like he did," Pence explained. "Maybe it was that my grandparents were so proud of the first Irish Catholic president."

Pence grew up attending Catholic schools, but it wasn't until college that he had a spiritual awakening.

"I began to meet young men and women who talked about having a personal relationship with Jesus Christ, and while I cherish my Catholic upbringing and the foundation that it poured in my faith, that had not been a part of my experience," Pence said.

"Standing at a Christian music festival in Asbury, Ky., in the spring of 1978, I gave my life to Jesus Christ and that's changed everything," he recalled.

One of the greatest gifts Pence said he's received from God is failure. During two failed runs for Congress, Pence developed a passion for broadcast radio that turned into his own talk radio show that was eventually syndicated statewide.

He described his show as "Rush Limbaugh on decaf" and one of the "most formative experiences of his life."

The opportunity to hear from Hoosiers every day and learn about their values and challenges, he said, gave him confidence when going up against Democrats and even Republicans on issues like government spending.

As chairman of the Republican Conference, Pence serves as spokesman for his colleagues and manages the conference's support staff. He has been mentioned as a potential candidate for president. Pence says the best thing he can do for his political future is to get Republicans elected to the House this year.

Last fall, he and his wife Karen completed the 26.2 mile Marine Corps Marathon in Washington, D.C. The Bible verse, "Let us run with perseverance the race marked out for us," found in Hebrews 12:1 served as his inspiration. He says it's that same verse that is inspiring him to win back the House.

"I believe that if we run that race with conviction and endurance we can win back the Congress for the common sense and the common values of the American people, turn this tide of big government back and set the stage for a boundless American future," Pence wrote in a recent letter to supporters.

However, win or lose this November, he keeps in mind the things that are really important.

"It's a privilege to serve in Washington, D.C., but I never lose sight of what the Lord has called me to do in my life,"  he explained. "And that is to be, first a husband, and then a father, and succeed there from His perspective, and He'll take care of everything else."