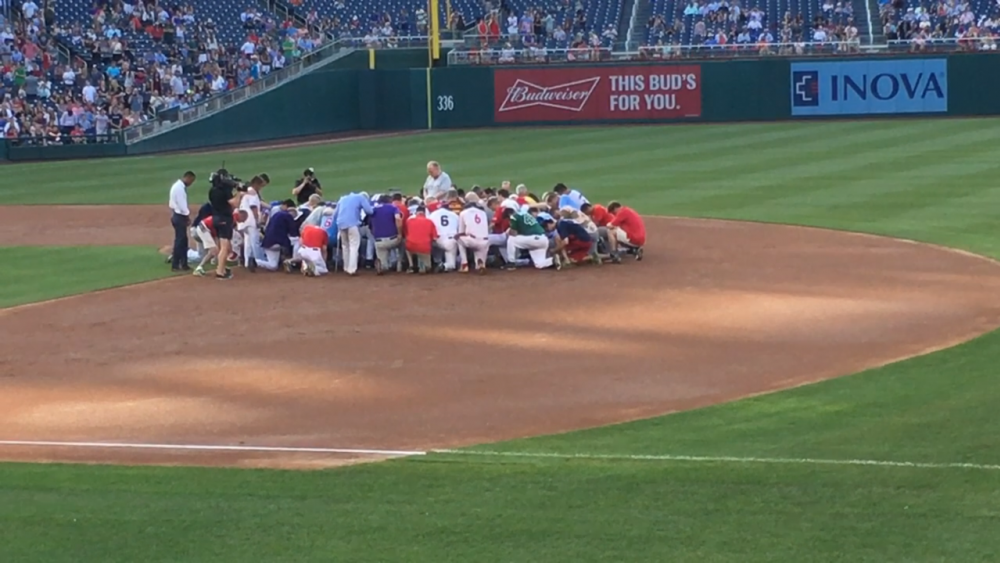 WASHINGTON -- The Democratic and Republican congressional baseball teams played their annual game to benefit charity Thursday night under the lights at Nationals Park in Washington, D.C., only 36 hours after a shooter unleashed gunfire at a GOP team practice.

The Congressional Baseball Game for Charity sold more than 20,000 tickets and raised more than $1 million for charity. Proceeds go to the Capitol Police Memorial Fund, the Boys and Girls Clubs of Greater Washington, the Washington Literary Center and the Washington Nationals Dream Foundation.

It's a tradition dating back to 1909. But this year after the Alexandria shooting, which left House Majority Whip Congressman Steve Scalise in critical condition and three others hurt, playing meant more than charity. The game was for healing.

First, Democrats and Republicans gathered around second base to pray at the spot where Rep. Scalise was shot.

President Donald Trump then made a statement on the giant screen.

"By playing tonight, you are showing the world that we will not be intimidated by threats, acts of violence, or assaults on our democracy. The game will go on," he said. "I want to take a moment and send our thoughts, love and prayers to Congressman Steve Scalise and his entire family."

The crowd started clapping and chanting U.S.A. after the first pitch was thrown by injured Capitol Police Officer David Bailey, one of the two officers on the congressman's security detail who've been credited with saving his life and potentially many others.

Many wanted to show up to the game to support America.

"We've never been to a congressional baseball game before," attendee Larry Shindelnan told CBN News. "We think this is an historic occasion. We wanted to show our support especially for Congressman Scalise and everybody."

Another attendee, Dana Moore, said, "I'm tried of seeing all the division and everything. Violence is not the way to handle the situation."

Democrats won 11-2 and in a touching move gave their trophy to Republicans to put in Scalise’s office. Players from both sides also wore Louisiana State University hats in his honor.

Meanwhile, the FBI is still asking northern Virginians for help in trying to determine a motive behind the attack.

They want to speak with anyone who had any contact with the gunman, 66-year-old James Hodgkinson, who agents say was living out of his white cargo van in the Alexandria area since March of this year.

As for Congressman Scalise, doctors say the bullet hit him in the hip, then traveled through his internal organs. Hospital staff told CBN News he will likely undergo more surgeries.

Meanwhile, the other victims, including Capitol Police officer Crystal Griner, are expected to recover.

Some say it brought back painful memories of the shooting six years ago involving former Rep. Gabby Giffords.

CBN News spoke with several lawmakers who say it's a fine line to be available to constituents and still be safe. Most say they don't need extra security, while others say for certain events, they wouldn't mind the extra security.