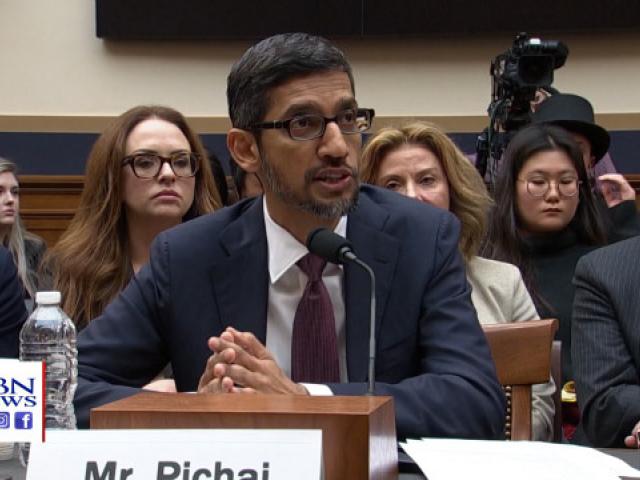 WASHINGTON – The battle between Google and conservatives returned to Capitol Hill Tuesday as the tech giant's CEO assured House Judiciary Committee members he runs the corporation without partiality toward any ideology.

"Are America's technology companies serving as instruments of freedom or instruments of control?" House Majority Leader Kevin McCarthy (R-CA) asked. "Because a free world depends on a free internet, we need to know that Google is on the side of the free world."

Rep. Bob Goodlatte (R-VA) noted, "By ranking pages, Google's search always favors one page over another. This process, however, turns much more sinister with allegations that Google manipulates the algorithm to favor the political party it likes."

With that in mind, California Democratic Rep. Zoe Lofgren also had some questions for Pichai on how Google's search engine works.

"If you Google the word idiot under images, a picture of Donald Trump comes up – I just did that. How would that happen?" she asked the Google CEO.

"We provide search for any time you type in a key word," Pichai replied.

"So it's not some little man sitting behind the curtain figuring out what we're going to show the user?" Lofgren quipped. "It's basically a compilation of what users are generating and trying to sort through that information."

However, a study from Pew reveals concerns of bias are bipartisan. Researchers found that 85 percent of Republicans and 62 percent of Democrats believe social media companies intentionally censor viewpoints they find objectionable.

Even so, Pichai denied the charges.

"I lead this company without political bias and work to ensure that our products continue to operate that way," Pichai said in his opening remarks. "To do otherwise would go against our core principles and our business interests. We are a company that provides platforms for diverse perspectives and opinions – and we have no shortage of them among our own employees."

But Media Research Center President Brent Bozell wasted no time taking to Twitter to give the following blunt assessment of Google's denials.

"Bull," he wrote. "We've seen lots of evidence of political bias against the right already, including efforts to influence elections. Denying the problem just makes fixing it impossible."

Sundar Pichai to tell Congress today that he leads Google "without political bias." Bull. We've seen lots of evidence of political bias against the right already, including efforts to influence elections. Denying the problem just makes fixing it impossible.

Critics say there's so much evidence, in fact, that there's now a whole movie about the controversial issue. It's called "The Creepy Line."

In the 80-minute documentary, former Google CEO Eric Schmidt explains that "Google policy on a lot of these things is to get right up to the creepy line and not cross it."

“We saw how upset some of the top people in Google were, and for you to come in here and tell us, ‘There is no political bias in Google,’ tells us you’re either being dishonest – I don’t wanna think that – or you don’t have a clue how politically biased Google is,” Rep. Louie Gohmert (R-TX) charged.

Meanwhile, in a National Review op-ed, Kyle Smith explains how the tech giant keeps track of users both on and offline using what he calls a "surveillance business model."

"Google knows more about you than your spouse does," he wrote. "It even has drafts of emails you didn't send. Oh, and they have the power to block information from reaching you, too."

"Just by bumping undesirable stuff to the second page of search, Google can more or less make it disappear," he continued. "Hey, good thing Google doesn't have any overt political or cultural preferences you might not agree with, right?"

The Google chief also faced tough questions over whether his company was planning to build a search engine for China. The tech giant  pulled out of that country in 2010 in a high-profile dispute with its communist government's policies.

Pichai indicated Google had no plans to do so "right now."