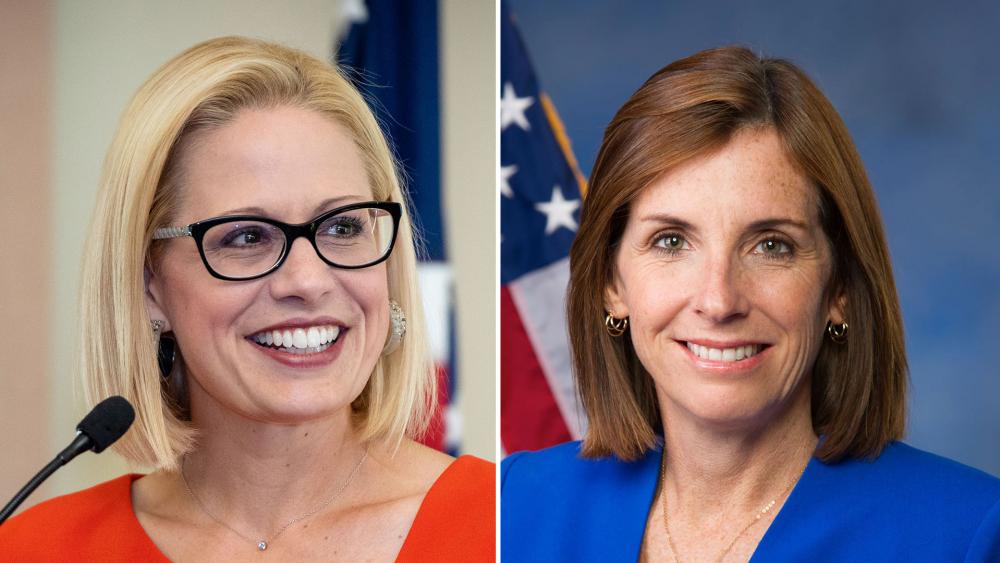 Another Senate race seems to be slipping from the Republicans' grip in the controversial aftermath of the midterm elections. The Arizona Senate contest was too close to call, but now the Democrat candidate is suddenly pulling ahead as votes are still being counted.

In Arizona, Democrat Kyrsten Sinema has increased her lead over Republican Martha McSally. And the Cook Political Report has declared Sinema the winner even though 200,000 votes are still to be counted.

Sunday's vote counting included a batch of ballots from Maricopa County that Republicans hoped McSally could win. Instead, it added 2,200 to Sinema's lead.

Sinema now leads by 37,000 ballots or nearly 2 percent of the overall vote. President Trump has been objecting to the sudden rise in votes for Sinema.

Trump tweeted his suspicions, saying: "Just out - in Arizona, SIGNATURES DON'T MATCH. Electoral corruption - Call for a new Election? We must protect our Democracy!"

The state's Republican secretary of state, Michele Reagan, says election security is the priority. Roughly 320,000 mail ballots were dropped off on Election Day, and Arizona is working to prevent voter fraud by double-checking them with votes cast at the polls to confirm no one voted twice.

Arizona's voting process is typically slower than the rest of the country, and all ballots won't be counted until Thursday.

Republicans will keep control over the US Senate no matter what happens in the Arizona count, but if Sinema wins, it will decrease the size of the GOP majority in the Senate.

Meanwhile, another vote-counting battle is taking place in Florida where a recount is underway after Republican Gov. Rick Scott won a very slim majority of the votes there over incumbent Democrat Sen. Bill Nelson.