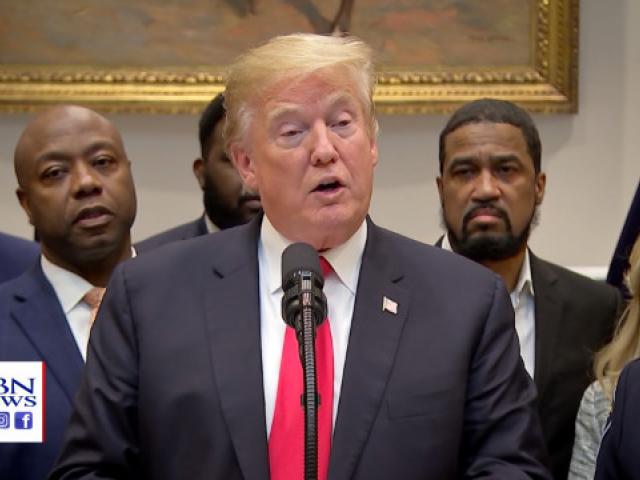 WASHINGTON – After months of back and forth, President Donald Trump is lending his support to major legislation aimed at giving prison inmates a second chance. It's called the First Step Act.

"Today I am thrilled to announce my support for this bipartisan bill that will make our community safer and give former inmates a second chance at life after they have served their time," the president said Wednesday.

The clock is ticking on Congress' chance to make changes to the criminal justice system. But while things couldn't be more divided on Capitol Hill, advocates say the time to act is now.

Among those advocates is Kelley Paul, wife of Sen. Rand Paul (R-KY).

"I came to this issue through my work in Kentucky visiting various halfway houses, recovery centers like Hope House, Isaiah House and realizing how pervasive our drug problem is and how we need alternatives to incarcerating people," she told CBN News.

Why Rand Paul's Wife Is Lending Her Support

"People were not aware of some of the things that were going on in our prisons. First and foremost, women who were giving birth were being shackled," she said. "Women's health and hygiene needs were not being provided and taken care of."

"When I talk to people about that, they say, 'You're kidding me,'" she recounted.

For Mrs. Paul, fixing the problem goes directly to the heart of justice, particularly as it pertains to civil rights.

"I'm a conservative, but I always say, small government really helps people from all walks of life," she told CBN News.

"I think a lot of times when progressives hear conservatives talk about big government, they think we're just concerned about taxes or overregulation, or business or economics. But really this is a civil rights issue," she explained.

Consequently, Mrs. Paul is doing something she says her friends aren't used to seeing: bringing her desire to right those wrongs straight to Washington – and she's not alone.

The push for real reform extends far beyond Congress. Christian advocacy groups, celebrities and even the president's son-in-law and adviser, Jared Kushner, are working tirelessly to see the system change.

"Jared Kushner has been the pivotal player in this. He personally comes to this issue," said Jessica Sloan, national director and co-founder of the criminal justice reform group #cut50. "His own father was incarcerated, and he has been the driving force inside of the White House and making sure that this gets done."

Former prisoners have also been instrumental in this fight, along with those who preach about second chances. Roughly 2,000 pastors signed a letter in support of Congress' latest effort.

JUST IN: Here are two excerpts of a letter from more than 2,000 faith leaders that was sent to the White House today in support of criminal justice reform legislation. Read exclusively here. @CBNNews @AmberCStrong @WhiteHouse @Paula_White @realDonaldTrump @POTUS pic.twitter.com/hsizYl1eiZ

What's in the Bill

"First, it will provide new incentives for low-risk inmates to learn the skills they need to find employment, avoid old habits, and follow the law when they are released from prison," Trump explained. "These incentives will encourage them to participate in vocational training, educational coursework, and faith-based programs..."

"Today's announcement shows that true bipartisanship is possible," Trump added. "Redemption is at the heart of the American idea, and that's what this is about."

Backing the legislation was likely a tough decision for a president who campaigned on law and order, but support from the National Fraternal Order of Police seemed to help balance the scales.

The ball is now in the Senate's court, where advocates hope this lame duck session can lead to a second chance for prisoners and families across the nation.