Lindsey Graham's Fiery Senate Speech Blasted Democrats at a Pivotal Moment: These Are His Exact Words 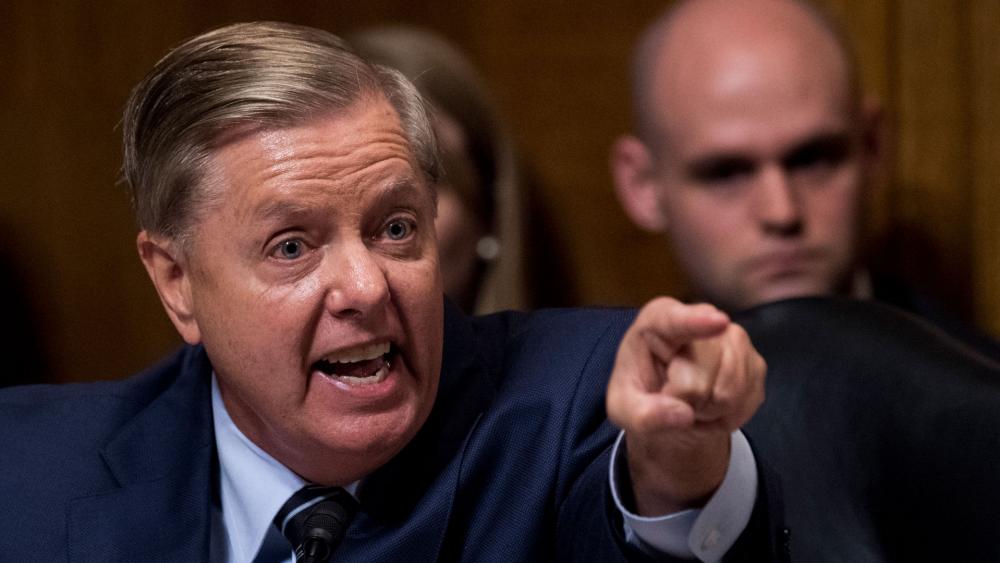 A powerful moment in US Senate history happened after Sen. Dick Durbin (D-IL) had been repeatedly badgering Judge Brett Kavanaugh, demanding to know if he wanted an FBI investigation.

Kavanaugh said he was open to whatever the Judiciary Committee wanted to do. But Durbin ferociously demanded an answer, hoping to force Kavanaugh to explicitly state that HE wanted the FBI to investigate.

Then Sen. Lindsey Graham stepped in, and THIS happened:

Sen. DURBIN: I think an FBI investigation will help all of us on both sides of the issue.

Sen. GRASSLEY: Senator Graham asked for the floor. But before he does, it seems to me that if you want to know something, you've got the witness right here to — to ask him. And secondly, if you want an FBI report, you can ask for it yourself. I've asked for FBI reports in the past, in the 38 years I've been in the Senate.

Sen. GRAHAM: Are you aware that at 9:23 on the night of July the 9th, the day you were nominated to the Supreme Court by President Trump, Senator Schumer said 23-minutes after your nomination, "I will oppose Judge Kavanaugh's nomination with everything I have... and I hope a bipartisan majority will do the same. The stakes are simply too high for anything less." Well, if you weren't aware of it, you are now.

Did you meet with Senator Dianne Feinstein on August 20th?

Judge KAVANAUGH: I did meet with Senator Feinstein…

Sen. GRAHAM: Did you know that her staff had already recommended a lawyer to Dr. Ford?

Judge KAVANAUGH: … I did not know that.

Sen. GRAHAM: Did you know that her and her staff had this allegation for over 20 days?

Judge KAVANAUGH: I did not know that at the time.

Sen. GRAHAM: (Turning to Democrats) If you wanted a FBI investigation, you could have come to us. What you want to do is destroy this guy's life, hold this seat open and hope you win in 2020. You've said that, not me.

(Turning to Kavanaugh)
You've got nothing to apologize for. When you see Sotomayor and Kagan, tell them that Lindsey said hello because I voted for them. I would never do to them what you've done to this guy. This is the most unethical sham since I've been in politics. And if you really wanted to know the truth, you sure as hell wouldn't have done what you've done to this guy.

Are you a gang rapist?

Sen. GRAHAM: I cannot imagine what you and your family have gone through.

(Turning to point at Democrats on the committee)

Boy, you all (Democrats) want power. God, I hope you never get it. I hope the American people can see through this sham. That you knew about it and you held it. You had no intention of protecting Dr. Ford; none.

She's as much of a victim as you are. God, I hate to say it because these have been my friends. But let me tell you, when it comes to this, you're looking for a fair process? You came to the wrong town at the wrong time, my friend. Do you consider this a job interview?

Judge KAVANAUGH: If the advice and consent role is like a job interview.

Sen. GRAHAM: Do you consider that you've been through a job interview?

Judge KAVANAUGH: I've been through a process of advice and consent under the Constitution, which…

Sen. GRAHAM: Would you say you've been through hell?

Judge KAVANAUGH: I — I've been through hell and then some.

Sen. GRAHAM: This is not a job interview.

Sen. GRAHAM: This is hell.

Judge KAVANAUGH: This — this…

Sen. GRAHAM: This is going to destroy the ability of good people to come forward because of this crap... Your high school yearbook...

You have interacted with professional women all your life, not one accusation.

You're supposed to be Bill Cosby when you're a junior and senior in high school. And all of a sudden, you got over it. It's been my understanding that if you drug women and rape them for two years in high school, you probably don't stop.
Here's my understanding, if you lived a good life people would recognize it, like the American Bar Association has, the gold standard. His integrity is absolutely unquestioned. He is the very circumspect in his personal conduct, harbors no biases or prejudices. He's entirely ethical, is a really decent person. He is warm, friendly, unassuming. He's the nicest person — the ABA.

To my Republican colleagues, if you vote no, you're legitimizing the most despicable thing I have seen in my time in politics.

(Turning to Democrats again)
You want this seat? I hope you never get it.

(Turning to Kavanaugh)
I hope you're on the Supreme Court, that's exactly where you should be. And I hope that the American people will see through this charade. And I wish you well. And I intend to vote for you and I hope everybody who's fair-minded will.