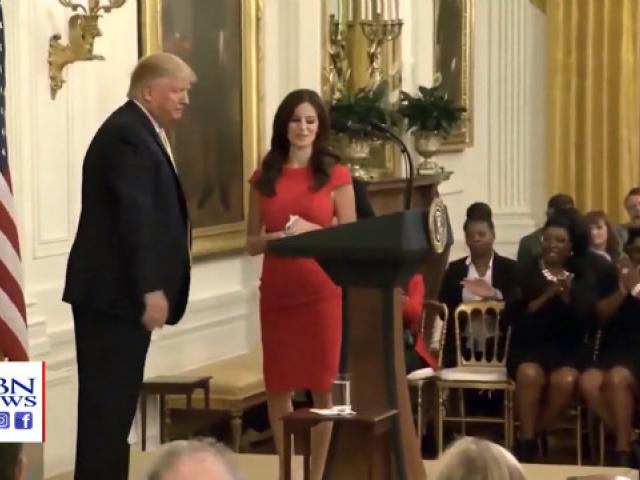 WASHINGTON - President Trump is signaling social media giants should brace themselves for tough actions from his administration as he traded censorship stories with a crowd of conservatives at the White House Thursday.

"We will not let them get away with it much longer," he said as he traded censorship stories with a crowd of conservatives during a social media summit Thursday.

After the event, attendees were invited to the Rose Garden to watch the president deliver a statement on a different topic.

As everyone, including the White House Press Corps, waiting for the president to arrive, a scuffle ensued between conservative radio host Sebastian Gorka and CNN contributor Brian Karem.

"You're threatening me in the Rose Garden," Gorka said as he got out of his seat and walked towards Karem who was standing with the press corps.

"You're a punk, you're not a journalist, you're a punk," Gorka continued getting in Karem's face.

It was an explosion at the end of a day where conservative activists, thinkers, and influencers enjoyed an open an sympathetic ear from the president.

"Together you reach more people than any television broadcast network by far, not even close," the president said, speaking to the group in the East Room of the White House.

Several big examples of discrimination against conservatives were on display Thursday.

Pro-lifer Lila Rose shared how her group, Live Action, has been permanently barred from Pinterest, had viral videos buried on YouTube, and that's not all.

"We have been for four years banned from doing any advertising on Twitter and they told us that in order to reinstate our accounts we'd have to stop calling for the defunding of Planned Parenthood and stop sharing our pro-life content. Meanwhile, Planned Parenthood and other abortion groups continue to advertise," Rose told the audience when the president gave her the podium.

Rob Bluey with The Heritage Foundation also attended the summit.

"The Daily Signal published a video last year with a pediatrician talking about the dangers of giving puberty blockers to kids. The video went viral on Facebook, in fact, it reached 70 million views when all of a sudden it disappeared and we took our case to Facebook. We said, 'Why did you take this down off your platform?' It took Facebook a little while to get back to us but eventually they did restore the video and apologize for doing that," he told CBN News.

A Hill.TV American Barometer survey in December found 58 percent of voters think social networks are unfair to conservatives. The same poll found Generation Z, folks born in the mid-1990s and early 2000s, are the only age group that believes social media companies are not biased against conservatives.

"Google, Facebook, Twitter - they've gotten these special deals from government. They've gotten a special giveaway from government, they're treated unlike anybody else. If they want to keep their special deal, here's the bargain: They have to quit discriminating against conservatives. Do you agree with that? No more," he said at the summit to applause.

Sen. Hawley has introduced a bill that amends the Communications Decency Act. Big tech companies would be required to prove their algorithms and content-removal practices are politically neutral. They'd also have to reapply for immunity every two years.