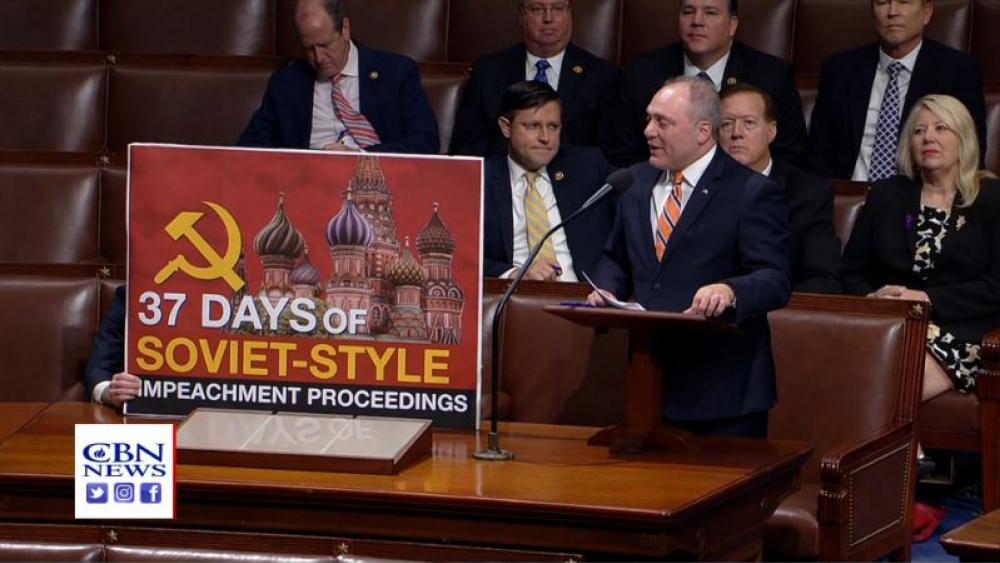 In a strikingly partisan vote, House Democrats are opening the doors for public hearings and setting a framework for impeachment.

In a tweet, President Trump declared the impeachment probe, "The Greatest Witch Hunt in American History!"

Two Democrats joined every Republican in voting "No" on the official rules for the House impeachment inquiry, which will entail public hearings.

Even the Speaker of the House took part in the vote, bringing the tally to 232-196 to pass the resolution formalizing ground rules for impeachment.

"The Republicans are afraid of the truth," said Speaker Nancy Pelosi.

Ahead of the vote, the split-screen between the parties was on full display. Next to a graphic cutout of an American flag, Pelosi said democracy is at stake, adding that "this is something that is very solemn, but also prayerful."

With a hammer and sickle prop of their own, Republicans are accused Democrats of unprecedented veto power over witnesses.

Rep. Jim Jordan (R-Ohio) echoed that sentiment. "You're trying to put a ribbon on a sham process," he said.

The process guides rules for the President's lawyers to cross-examine witnesses and defend President Trump in hearings and outlines Republican and Democrat participation in the inquiry on three committees.

"We recognize the seriousness of this undertaking," said House Intelligence Chairman Adam Schiff, adding that the proceedings will allow for public hearings in the Intelligence and Judiciary committees.

The California Democrat said impeachment is a remedy to a president who sacrifices the national interest.

"I make no prejudgment as to whether that remedy will be warranted when we finish these hearings, I will wait until all the facts are put forward," said Schiff.

To call out Democrats for piling on, Jordan said, "I was in an impeachment deposition but then had to leave that to come to the floor for a vote on the rules for impeachment."

The resolution comes as witness interviews continue behind closed doors with Tim Morrison, the top Russia expert on the National Security Council, testifying Thursday ahead of a reported resignation.

That feeling sets the stage for a televised impeachment battle now set to begin.