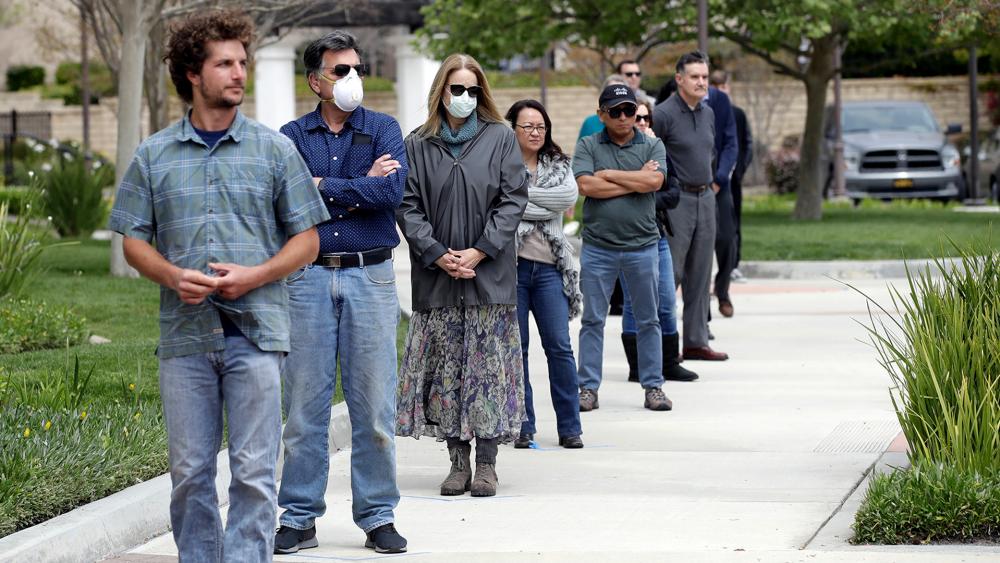 How do ethics figure into a pandemic? That's what some thought leaders were considering as they debated the thorniest moral questions presented by this pandemic during a Heritage Foundation webinar.

For instance, does whatever a state decides it must do to protect its citizens' health overrule every civil liberty and guaranteed constitutional right?

The US Constitution limited government and insisted it must not infringe on its citizens' God-given rights. But it also granted the states' police powers to protect its citizens.

So in a pandemic, what happens to the First Amendment right to assemble and the right to religious freedom?

The Princeton professor added, "All the various faiths are under rules in many states that forbid them from gathering for worship.  Is that constitutionally permissible? That actually turns out to be a complex question. We have to respect civil liberties while still acknowledging that the states do exercise police powers - which are broad, which are plenary, which are general - to protect public health and safety."

Catholic University of America's Melissa Moschella, a philosophy professor, agreed it's a thorny matter, but drew a firm line in the proverbial sand.

A State Can Forbid Gatherings, but Not Unequally

She stated, "It will always be illegitimate for the government to single out religion for special discrimination. So, for instance, it would be wrong for the government to say, 'We're going to forbid religious services of over 50 people' if it doesn't also forbid every other gathering of over 50 people. Unless there was something specific about religious services that made them more likely to transmit disease or something like that, in this circumstance."

"And I think that we can see in this time of pandemic, what the data makes clear is that the most dangerous thing… the greatest source of the rapid spread of this virus… are situations in which you have large groups of people in very friendly, close contact," she added.

No Less Burdensome Way to Do This

"Therefore there is a reason across the board – a compelling state interest in terms of protection of human life and health – to, for a time, forbid such large gatherings," Moschella explained.  "Yes, It is a burden on the free exercise of religion. But there is no less burdensome way at this point to achieve that goal. But again, it has to be even-handed."

In other words, if a state is going to allow drive-up restaurants or stores, it has to be even-handed when it comes to drive-in religious services.

"That seems to be no more risky than other sorts of things we are allowing," Moschella argued. "So I think the key thing is to make sure that religion is not given any kind of special disadvantage."

How Many Lives Will be Lost From the Supposed Cure?

Another huge controversy is how much the vast shutting down of America has wounded its people and if it's worth it in the light of how many lives the shutdown might be saving from the coronavirus?

Heritage Senior Research Fellow Ryan Anderson said, "We've taken pretty severe measures to try to combat COVID-19.  They seem to be somewhat effective in flattening the curve.  But those measures have costs, and not just in people's 401K.  I think some of the rhetoric around this – saying, 'If you care about the economy it means you don't care about grandma' – there's been bad rhetoric on both sides of these debates.  But real human beings – their livelihoods, their flourishing – have been put at risk."

He concluded, "This has to take a toll on people."

What if It Could Kill Hundreds of Millions?

But with so much unknown about the coronavirus and how much damage it could do worldwide, Harvard Professor of Epidemiology Tyler VanderWeele argued, "Given the level of uncertainty we have, I do think that the lockdown measures and the social distancing are good, because what we really want to prevent is the extreme scenario of this spreading everywhere and killing millions and tens of millions… hundreds of millions of people.  That scenario now doesn't seem overly likely.  But in the absence of information, I think it is important to try to protect against that possibility."

VanderWeele went so far as to admit those harms also lead to death, saying, "We certainly do know that depression, that loneliness, that lack of social support, that unemployment does lead to higher mortality.  There are very good studies indicating this."

He says it's hard to calculate right now how much this present crisis is adding to deaths caused by depression, loneliness, lack of social support and unemployment, "But that the measures we've put in place are contributing to an increased mortality is very clear."

If Rationing Becomes a Reality, Deciding Who Should Die

Another ethical issue is deciding who should be left to die if
there comes a time in this pandemic of such shortages of medical equipment or care that it must be rationed.

Prof. George insisted caregivers in such a circumstance must remember, "The profound inherent and equal dignity of each and every member of the human family.  That's bedrock."

"Human beings are tempted to begin dividing the world up into superiors and inferiors," he said. "The temptation will be to put people who are aging, who are elderly, or people who are disabled, suffering cognitive impairment or physical disabilities in an inferior class. That absolutely has to be resisted."

'That's Not Really a Life Worth Living'

Moschella said, "We should never be making those decisions with the mentality, 'Is this person's life worth saving? Does this person have a quality of life that is sufficient to render them worthy of this treatment?"

If rationing should become necessary, Moschella insisted, "We should not be thinking about is a life with somebody that has a disability worth living? Or is a life of somebody who is older equally worth living by comparison with a younger person? Those are considerations that should be off the table because of that bedrock principle of the equal fundamental dignity of every human person."

Decide Who CAN Benefit, Not Who SHOULD

Dr. Farr Curlin of the Duke University School of Medicine and Divinity School suggested medical professionals in a time of shortages can use this as a standard - picking who CAN benefit from treatment, not who SHOULD benefit.

Then they're no longer having to randomly, as Curlin put it, "Make a judgment between Patient A and Patient B."

She concluded, "In a case of scarcity, that's a reasonable way of trying to make that decision. It's not a judgment on the value of a particular person's life. Instead, it's a judgment on who is likely to benefit most from getting this scarce treatment?"

George weighed in, saying, "We cannot relegate anybody, however weak, vulnerable, poor – whatever deficiencies they may have, whatever they may be lacking – we cannot relegate them to inferior status.  Because their dignity, their fundamental value is no less than anyone else's."

We Are Divine & Valuable: A Civilizational Principle

The professor went on, "We cannot fall into what's sometimes called a utilitarian way of thinking where we imagine that the correct policy is the one that does the greatest good for the greatest number, as if human beings could be weighed and measured in their value in a way that would make that principle workable."

God Has Not Abandoned Us

Even though these days are hard, speaking to people made in the image of God and loved by their Creator, Curlin wanted to say, "Remember that God has not abandoned us. You can be alone and not be lonely if you are experiencing God and paying attention to how God is present to you. So this is a time to remember that."