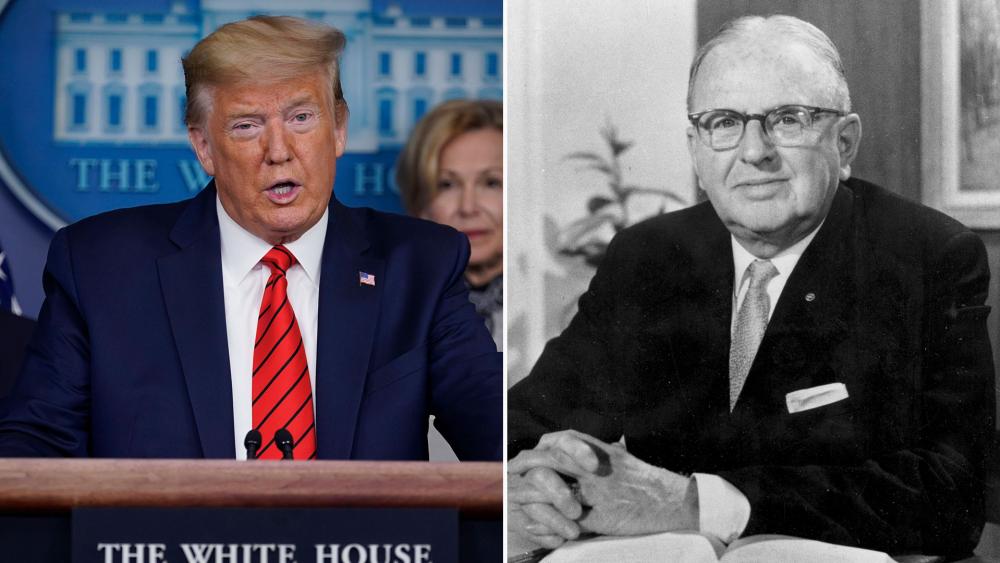 To say President Trump has his hands full on the coronavirus pandemic would be an understatement. So how does a president who's known for his bravado, and "can-do" attitude push through and take on the face of an invisible enemy like this? It starts with something Trump learned a long time ago: positive thinking.

Everybody knows all about Donald Trump's big best selling book, The Art of the Deal. It gives insight into how he deals with the business world but to understand how he thinks and operates overall, you need to delve into the lessons he learned from his favorite pastor: Norman Vincent Peale.

The famous pastor is well known for his massive best-selling book, The Power of Positive Thinking and his messages from the pulpit reflected the same theme.

"He (God) can make you think differently," Peale would tell congregants in one of his many sermons. "No longer negatively defeated but positive, hopeful, optimistic, victorious."

For 52 years, Peale was pastor of Marble Collegiate church in New York City and for many of those years, Trump's parents sat in the pews listening. So did a young Donald and that's when the message of positivity began to take hold.

Peale would often say that "one reason that the positive thinker gets positive results is he is not afraid of a problem. As a matter of fact, he finds problems exciting. He likes to take a tough knotty problem and rip it apart and put it together again in the right manner." That sure does sound quite a bit like Trump himself.

Indeed, with a father who preached much the same philosophy as Peale in terms of hard work and positive outcomes, Trump became sold on the idea. His father Fred actually became good friends with Peale and the pastor married Trump and his first wife Ivana.

Decades later, Trump described himself as follows to Psychology Today Magazine: "I'm a cautious optimist but also a firm believer in the power of being positive," Trump said back in 1989. "I think that helped. I refused to be sucked into negative thinking on any level, even when the indications weren't great. That was a good lesson because I emerged on a very victorious level. It's a good way to go."

Further cementing that view, CBN News interviewed the future president during his run for the presidency in 2015 where he made clear that Peale's impact on his life was always on the top of his mind.

"The greatest speaker I think I've ever witnessed was Dr. Norman Vincent Peale," Trump told CBN News back in September 2015 on his California golf course overlooking the Pacific Ocean.

"He would speak the power of positive thinking. He would speak so much—and he'd bring it into modern-day life. He talked about success stories and people that were successful and became alcoholics, and then they conquered it…and I grew up watching that," he said.

"He wasn't reading. I've heard plenty of pastors and ministers that read. It's not the same thing. Norman Vincent Peale would get up, and his arms would be flailing, and you hated to leave the church because you wanted him to go on further," Trump explained.