As Trump Legal Team Takes Stage, Sekulow Uses Schiff's Own Words Against Him 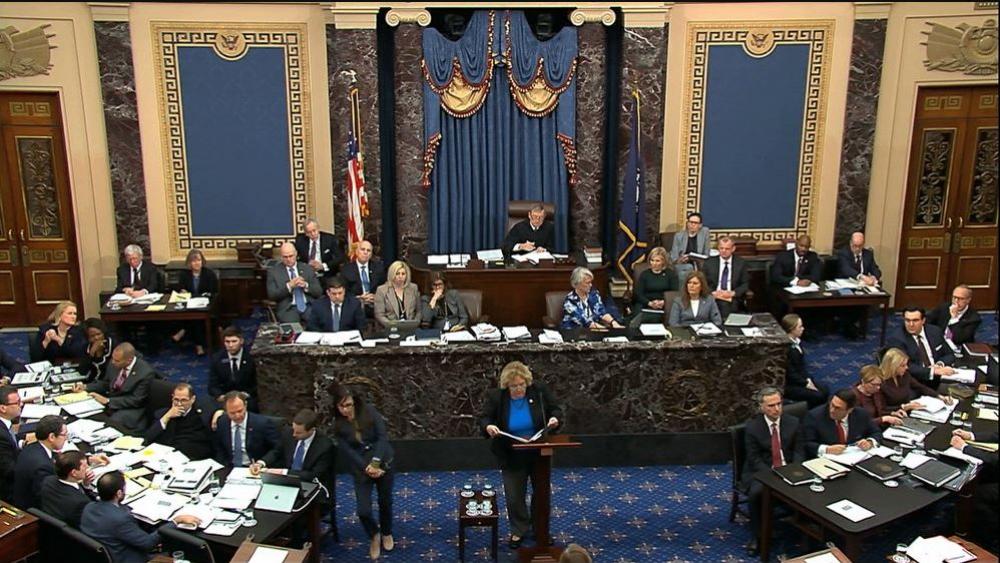 The President is in Europe, arriving at the World Economic Forum in Geneva, Switzerland as his impeachment trial got underway. "We are bringing back tremendous business in the United States and they're all here to see," Trump said. "I'll be making a speech and then we'll be leaving shortly. But I think it's very important. The other is just a hoax. It is a witch hunt that's been going on for years and it's frankly, it's disgraceful."

Trump's legal team outlined his defense strategy in a brief, arguing the President did "absolutely nothing wrong" calling it a "rigged process."

They added that Trump is the victim of a partisan plot "to corrupt the extraordinary power of impeachment for use as a political tool to overturn the result of the 2016 election and to interfere in the 2020 election."

Are the Charges Sufficient for Impeachment?

"It needs to be criminal behavior, criminal in nature," said Alan Dershowitz, a member of the President's legal team. "The articles of impeachment are two non-criminal actions, namely obstruction of Congress and abuse of power."

The brief adds "the framers adopted a standard that requires a violation of established law to state an impeachable offense. By contrast, in their articles of impeachment, House Democrats have not even attempted to identify any law that was violated."

But some legal scholars state the President doesn't have to break the law to commit an impeachable offense.

Democrats say "the facts are indisputable and the evidence is overwhelming" that Trump pressured Ukraine to investigate a political rival.

"We believe that once you hear those initial presentations the only conclusion will be that the President has done nothing wrong," White House Counsel Pat Cipollone told the senators.

Cipollone will represent Trump along with his personal attorney Jay Sekulow.

Sekulow Turns the Tables on Schiff

Tuesday afternoon, Sekulow turned the tables on House impeachment manager Rep. Adam Schiff (D-CA) by quoting his own words against him.

Schiff was arguing against executive privilege, claiming the president had obstructed the Democrats’ impeachment inquiry by telling his senior aides not to comply with congressional subpoenas that directed them to testify in front of the House committees.

Sekulow reminded Schiff of the words he once used when the Republican-led House held President Obama’s Attorney General Eric Holder in contempt for refusing to release documents relating to Operation Fast and Furious.

Sekulow said, "Mr. Manager Schiff wrote at the time, 'The White House assertion of privilege is backed by decades of precedent that has recognized the need for the President and his senior advisers to receive candid advice and information from their top aides.'"

"Indeed that's correct," Sekulow said, "Not because Mr. Schiff said it, because the Constitution requires it."

Meanwhile, House Democrats were calling Cipollone a "material fact witness" who should be disqualified from defending the commander-in-chief.

The White House responded calling Democrats an "utter joke" saying this move to remove one of Trump's lawyers is a "political stunt."

A Prayer from Chaplain Barry Black

With partisanship on full display, even before the afternoon trial session began, Senate Chaplain Barry Black took a moment in his opening prayer to remind all those present and watching on television on whom we can all rely.

"We declare that You alone are our hope," Black prayed.

As the arguments went late into the night, a clash over witnesses brought a rebuke from Chief Justice John Roberts.

Rep. Jerrold Nadler said, "President Trump does not want you to hear from Ambassador Bolton. It has nothing to do with executive privilege or this other nonsense."

Cipollone replied, "The only one who should be embarrassed Mr. Nadler is YOU."

Roberts stepped in, "I think it's important for me to admonish the counsel for both... I do think those addressing the Senate should remember where they are."