Pence Mocked for Praying for God's Help to Fight Coronavirus, but He's in Good Company 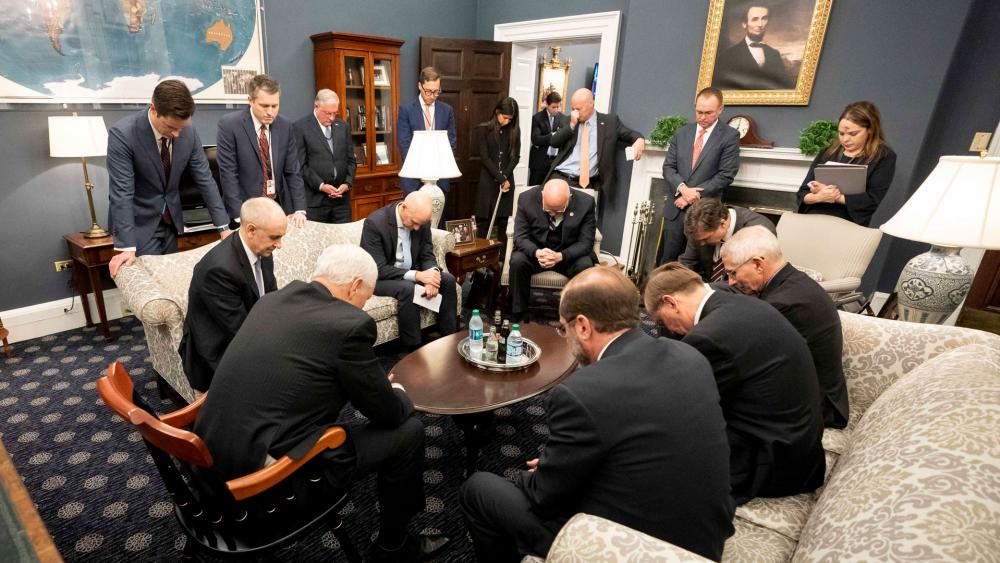 The Coronavirus is a major concern to millions of people worldwide but apparently, to some on Twitter, a prayer to God from Vice President Pence about the deadly virus is also a concern. Recently, Pence opened up an administration task force meeting with a prayer and the photo went semi-viral as many on Twitter had quite a few unkind words to say about it. Clearly, in today's divisive and toxic culture, not even a simple prayer is off-limits to criticism, especially when it comes from Vice President Pence, a man who takes his Christian faith very seriously.

Thomas Chatterton Williams, a writer for New York Magazine and Harper's Magazine tweeted about the photo and it took off like wildfire. He tweeted the following: "Mike Pence and his coronavirus emergency team praying for a solution. We are so screwed." A tweet by Playboy White House Correspondent Brian Karem chimed in with this: "Clear that @vp and @realdonaldtrump are in over their heads. POTUS is literally praying for a miracle to make coronavirus go away." Thousands of others followed with snarky tweets of their own.

As Christians, we know that prayer is an act of surrender. We pray because we realize that we don't have answers to all of life's questions and we need God's guidance. Mike Pence is clearly praying to God for wisdom regarding how the government should combat the coronavirus and that should not be controversial. In May 2018, I spoke to the vice president about how this White House is constantly on its knees in prayer. "There's prayer going on on a regular basis in this White House," Pence told me. "It's one of the most meaningful things to me, whether it's public meetings or not."

It should come as no surprise that past administrations relied on prayer frequently during a crisis. Take, for example, President Bill Clinton. In the mid-1990s, as America was preparing to invade Haiti, Clinton's speechwriter wrote a line, that said, "no president makes decisions like this one without deep thought." But Clinton said something was missing. He added the word prayer so it read, "thoughts and prayers."

During the brutal and bloody US Civil War, Abraham Lincoln could only look to God saying, "I have been driven many times upon my knees by the overwhelming conviction that I had nowhere else to go. My own wisdom and that of all about me seemed insufficient for that day."

President John F. Kennedy, a Roman Catholic, was known to head straight to St. Matthew's Cathedral across the street from the White House for prayer during the Cuban Missile Crisis.

Of course, we can't leave out President Jimmy Carter. The Southern Baptist Sunday School Teacher talked extensively about praying for wisdom when trying to break an impasse between Anwar Sadat, a Muslim, and Menachem Begin, a Jew, at the famous Camp David Peace Accords.

President Gerald Ford turned to the Bible too.  As Richard Nixon's resignation was nearing and Ford was about to become president, he and his son began reading from Proverbs 3:5-6, where it talks about trusting in the Lord with all your heart and leaning not on your own understanding.

Clearly, Mike Pence's prayer is not unusual in any way, shape or form. As a matter of fact, praying for God's guidance in a crisis, is actually as American as it gets.