Fighting for the Faith Vote: Top Christian Leaders Rally Prayer for Trump as Others Rally 'Souls to the Polls' for Biden 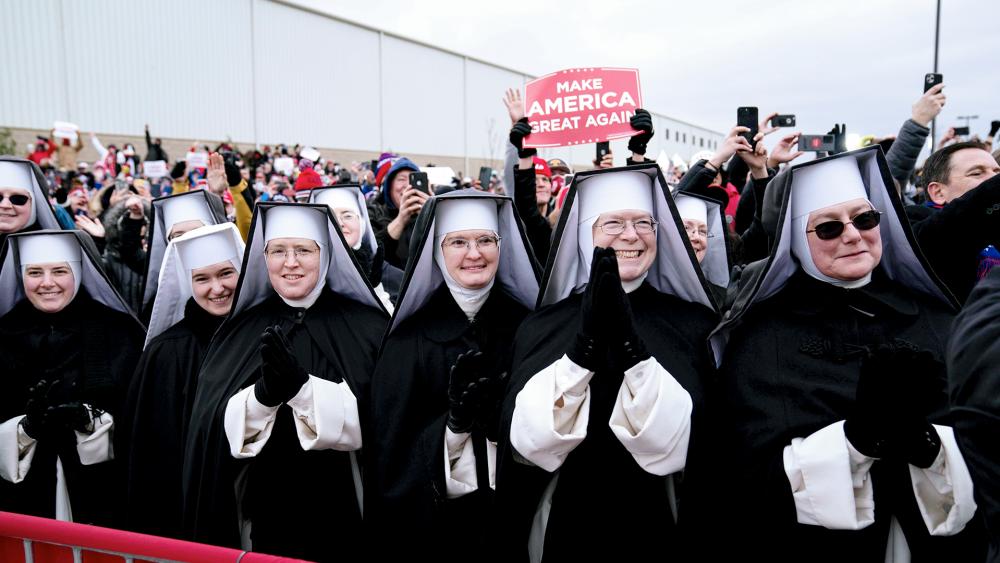 Nuns with the Dominican Sisters of Hartland, Mich., applaud as President Donald Trump (AP Photo/Alex Brandon)
6206495181001
Fighting for the Faith Vote: Top Christian Leaders Hold Prayer Call for Trump as Other Pastors Rally 'Souls to the Polls' for Biden

ABOVE:  Dr. Ed Stetzer, the Billy Graham chair of church, mission, and evangelism at Wheaton College, appeared on the Monday afternoon edition of CBN's Newswatch to talk about faith during this heated presidential election. Newswatch is seen weekdays on the CBN News Channel.

As the clock counts down to the 2020 presidential election, faith communities are coming together to show their support for President Donald Trump and Democratic challenger Joe Biden.

A live "Call to Prayer" was held online for Trump on Sunday where a large group of pastors and other faith leaders gathered to pray for the president.

The prayer event, which was hosted by Lara Trump, kicked off with Pastor Paula White thanking viewers for watching and to participate by sharing their prayer requests.

"We're so excited to be with these wonderful faith leaders and knowing that God not only hears our prayers but He answers our prayers," she said.

Megachurch Pastor Jack Graham with Prestonwood Baptist Church in Texas was the first to lead the large group in prayer.

"Lord, You are in the middle of this," Graham prayed. "We have seen You move in the past in incredible ways - thinking back to 2016 and we were just so grateful for Your hand moving in such a powerful way to elect our president and vice president. And now we are believing and trusting in You O God to do it again."

Christian singer Danny Gokey and his wife Sophia prayed for healing among our nation from multiple adversities.

Pastor Kelvin Cobaris who serves on President Trump's Faith Council prayed for God's peace to spread across our country.

"Lord, our land is in need of healing and I pray now that You will divinely intervene and let Your hands of grace, direction, of power guide us to the place You have so ordained," the pastor said. "We pray today for our President Donald John Trump. We thank You God for his courageous leadership. We thank You for the man that he is and we thank You for the time that You ordained for him to lead."

"My prayer is for the people, the president, and the vice president and I ask that You will bless them," he said. "Lord, in these next hours when fatigue seems to want to take over, give them the second wind that helps them to complete their task."

Other faith leaders that prayed for President Trump included:

Meanwhile, the nonpartisan group "Souls to the Polls" held events throughout numerous states this weekend, encouraging voters to go straight from church to the polls.

In Detroit, Bishop Charles H. Ellis III and dozens of his parishioners marched to rally voters for Biden after Sunday services. Ellis, who leads the 6,000-member Greater Grace Temple, said he's rallying Black voters to prevent a repeat of 2016 when Trump won Michigan, according to the Los Angeles Times.

Sharon Baptist Church in Philadelphia held a drive-in "Souls to the Polls" event for Biden, allowing the former vice president to speak to their congregants who were in their cars honking their support.

Christian Margaret Bess of West Palm Beach, Florida came out to encourage others to vote. Bess said she voted for Biden because of his compassion toward the people. "The economy is important, but it's not the most important thing," she said. "People matter, no matter what color or ethnic race they are."

Pastor Otis Raines with Christian Fellowship Baptist Church in Sanford, Florida held a prayer service near a polling location at a local library.

"We pray for guidance for all of us, we pray for the people going to vote on Tuesday and continuing to vote today, we pray for our candidates, no matter what affiliation they are," Raines said.

And Democratic volunteer Vera Deloney said there's no reason why Christians with differing political views can't come together and motivate their community to vote.

"There's no reason for us not to get along," Deloney proclaimed. "We all have to live on the planet together."

Meanwhile, faith leaders in Pennsylvania are pushing their state government to "count all the votes," citing support from more than 1,100 faith leaders across the country demanding "free and fair elections."