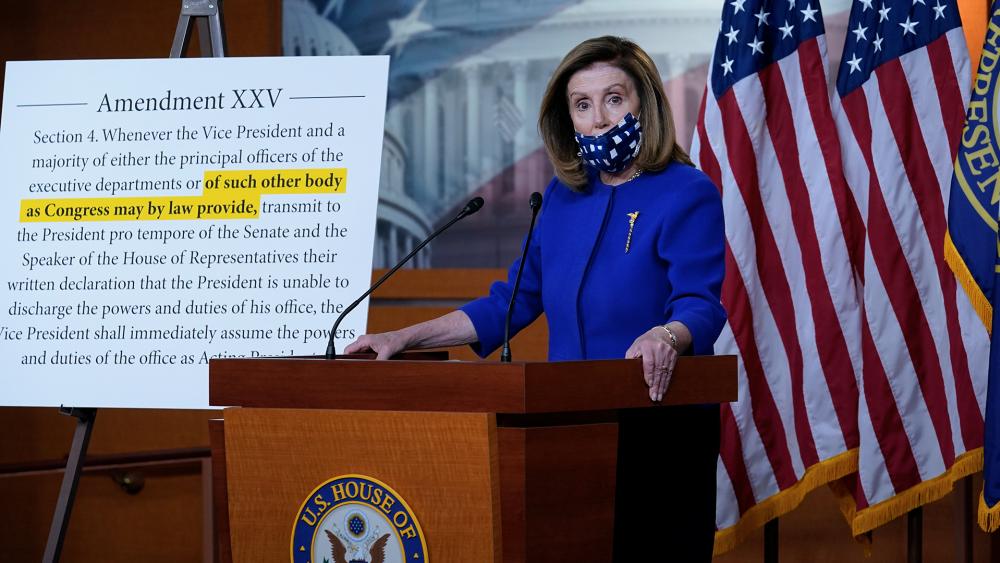 Speaker of the House Nancy Pelosi (D-CA) wants legislation that would create a commission to allow Congress to intervene under the 25th Amendment to the Constitution and remove the president from executive duties. (AP Photo/J. Scott Applewhite)
6199286661001
Pelosi Unveils 25th Amendment Plan, Preparing for 'the Necessity' of Removing Trump or Future Presidents

House Speaker Nancy Pelosi unveiled legislation Friday that would allow Congress to intervene under the 25th Amendment to the US Constitution to remove the president, insisting it's not about President Donald Trump but is inspired by the need for greater congressional oversight of his White House.

The legislation would create a commission to examine whether the president is fit for office and possibly remove him. Pelosi's announcement comes just a day after suggesting the president is in an altered state after receiving treatment for his coronavirus infection.

During a short press conference Friday morning, Pelosi prayed for President Trump's health, then questioned it.

"We are reminded by the necessity of action for the current president," she said. "Fitness for office must be determined by science."

Democrats claim the White House is not disclosing crucial details about the president's health. While they've considered invoking the 25th Amendment for awhile, Pelosi insists the timing has nothing to do with the election, which is now just less than four weeks away.

"This is not about President Trump," Pelosi said. "He will face the judgment of the voters. But he shows the need for us to create a process for future presidents."

The president, who revealed his COVID-19 diagnosis a week ago, insists he's feeling fine and is now well enough to hit the campaign trail as soon as this weekend.

"We want to do a rally probably in Florida on Saturday night. I might come back and do one in Pennsylvania the following night and it's incredible what's going on. I feel so good," Trump told Fox News host Sean Hannity.

Donald Trump, Jr. weighed into the debate with a jab at Pelosi, tweeting, "The person who is third in line to the nuclear codes but was 'setup' by her hair salon wants to have a conversation about the 25th amendment... Good one."  It was followed by laughing emojis.

The person who is third in line to the nuclear codes but was “setup” by her hair salon wants to have a conversation about the 25th amendment... Good onehttps://t.co/t1XbgfLSdw

And President Trump said the House Speaker is really planning for what will happen if Biden wins, tweeting:

"Crazy Nancy Pelosi is looking at the 25th Amendment in order to replace Joe Biden with Kamala Harris. The Dems want that to happen fast because sleepy Joe is out of it!!!"

Crazy Nancy Pelosi is looking at the 25th Amendment in order to replace Joe Biden with Kamala Harris. The Dems want that to happen fast because Sleepy Joe is out of it!!!

The Democrats' bill is largely viewed as a political statement. Congress is not in legislative session and consideration of the bill is unlikely, let alone votes in the House and Senate.

In reality, Pelosi's plan would be quite an undertaking. Section 4 of the 25th Amendment already allows officials such as the vice president and a majority of cabinet members, or "such other body as Congress may by law provide", to replace the president if he or she is incapacitated.

Congress could potentially order the president's removal, but it would take a two-thirds vote in both chambers.