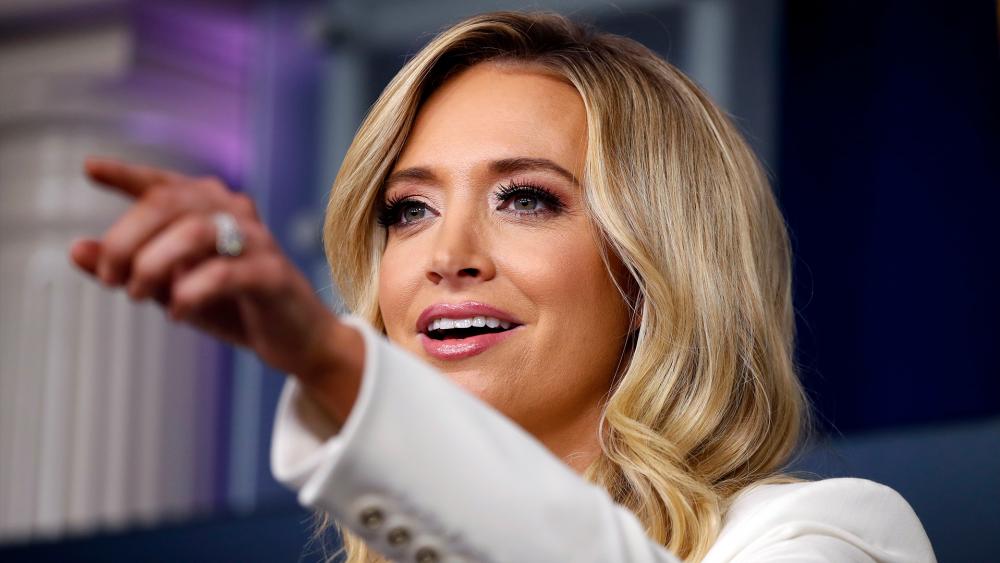 White House press secretary Kayleigh McEnany speaks during a briefing in the James Brady Briefing Room of the White House, May 6, 2020, in Washington. (AP Photo/Alex Brandon)

President Trump has taken heat from leaders in his own party for failing to clearly condemn white supremacists during Tuesday night's debate with Democrat candidate Joe Biden.

Debate moderator Chris Wallace asked the President to condemn white supremacy, just like Wallace did in the 2016 debate. In 2016, candidate Trump clearly condemned it. And then he said "sure" several times when asked again during this week's debate.

But Wallace kept pressing, and Trump was asked to call out a specific group to condemn. That's when Biden suggested a group known as the Proud Boys. Trump then agreed, saying the Proud Boys should "stand back and stand by."

Sen. Tim Scott (R-SC), an African American Republican, called on the president to clarify that statement, saying, "I think he misspoke. I think he should correct it. If he doesn't correct it, I guess he didn't misspeak."

Senate Majority Leader Mitch McConnell agreed, saying Sen. Scott's statement is "exactly how I would express myself on that issue."

During her weekly press conference on Thursday, several reporters badgered White House Press Secretary Kayleigh McEnany relentlessly with accusations against Trump over white supremacy. But she quickly put them in their place.

McEnany then offered the press an entire list of quotes from President Trump where he denounced white supremacy, and all hate groups on several different occasions during his presidency.

"He has condemned white supremacy more than any other president in modern history," McEnany said.

"The President just last week expressed his desire to see the KKK (Ku Klux Klan) prosecuted as domestic terrorists. This president has advocated for the death penalty for a white supremacist, the first federal execution in 17 years. His record on this is unmistakable and it's shameful that the media refuses to cover it," she noted.

McEnany also called out the media's double standard after they attacked the President for interrupting Biden but then repeatedly interrupted her, saying, "This isn't a debate. This is a White House press briefing. You ask a question and you give me time to answer."

Gotta say: the Proud Boys aren't white supremacists. They call themselves "Western chauvinists," but their leader is Enrique Tarrio, a Black Cuban guy, and the membership's ~15% POC. This is widely known among LEOs. How'd "racist," -as vs. "street LARP bad"- become the take here?

"Enrique Tarrio, their overall leader, is a Black Cuban dude. The Proud Boys explicitly say they're not racist," Mr. Reilly told The Washington Times. "They are an openly right-leaning group and they'll openly fight you — they don't deny any of this — but saying they're White supremacist: If you're talking about a group of people more than 10% people of color and headed by an Afro-Latino guy, that doesn't make sense."