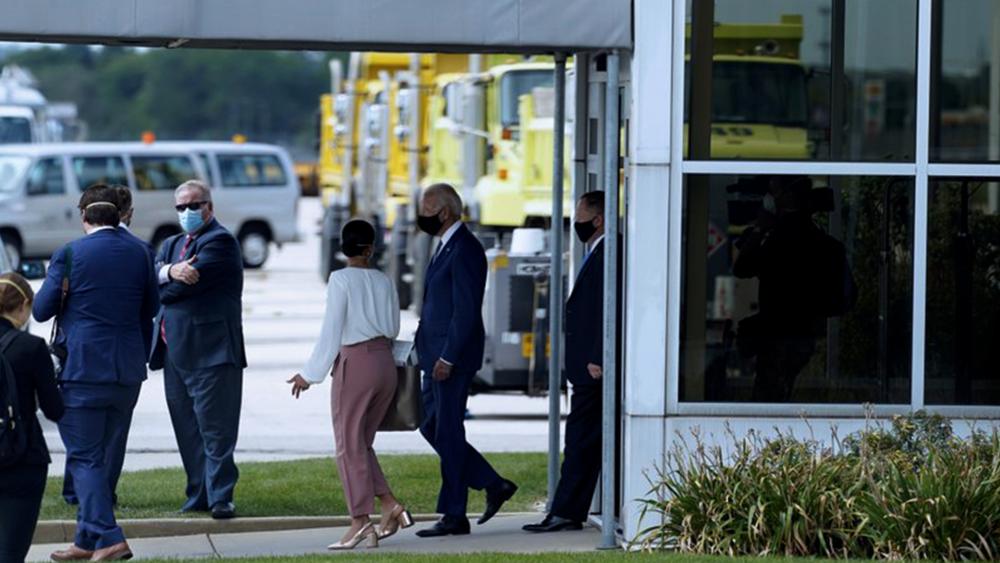 With his reported lead over President Trump slowly evaporating in the polls, Democratic presidential nominee Joe Biden headed to Kenosha, Wisconsin Thursday to meet with the family of Jacob Blake, the black man shot seven times as a police officer tried to arrest him.

It was Biden's first trip to Wisconsin as a part of the general election campaign.

"There's been overwhelming requests that I do come," Biden said. "Because what we want to do is we've got to heal. We've got to put things together. Bring people together. And so my purpose in going will be to do just that."

Biden spent more than an hour in private with Blake's father, Jacob Blake Sr., his siblings, and one of his attorneys, B'Ivory LaMarr. Blake's mother Julia Jackson and another attorney, Ben Crump, joined by phone.

After meeting with the family, Biden participated in a round table discussion at a local Lutheran church that included local business and community leaders.

Reflecting that his trip comes amid the COVID-19 pandemic, Biden wore a mask as he arrived in Milwaukee. Yet he broke his usual health protocols to shake hands with a campaign staffer.

With polling suggesting his campaign is being damaged by the continued rioting, Biden has lately been posturing as a law and order candidate, but Trump accused Democrats of refusing his help in restoring order.

"All they have to do is say, please come in, Mr. President. We'll have it done in one hour," Trump said.

In contrast to Biden, during the President's visit to Kenosha on Tuesday, Trump walked among the ruins of a city block that had been destroyed by fires set by rioters. He also spoke to several owners of small businesses on that block.

The President called the violence "anti-American."

"These are not acts of peaceful protest but, really, domestic terror," said Trump. And he condemned Democratic officials for not immediately accepting his offer of federal enforcement assistance, claiming, "They just don't want us to come."

Offering federal resources to help rebuild the city, Trump also toured a high school that had been transformed into a heavily fortified law enforcement command post.

Protests in Kenosha began the night of Blake's shooting, Aug. 23, and were concentrated in the blocks around the county courthouse downtown. There was an estimated $2 million in damage to city property, and Kenosha's mayor has said he is seeking $30 million from the state to help rebuild.

Trump announced Tuesday that his administration was making $5 million available to the city and sending than $42 million to the state, with most of the funding aimed at bolstering law enforcement.

"No one's perfect," Michelle Stauder, a 60-year-old retired Kenosha school teacher sitting on a barricade erected earlier and clutching a Biden-Harris campaign sign, told the Associated Press. "But I'm excited about Biden. And I like that he's here spreading the word of peace and rebuilding."

Kenneth Turner stood nearby with a Trump-Pence yard sign under his arm. "Everyone is blaming Trump for everything," the 50-year-old Kenosha man said. "But problems here have been around a long time before Trump."