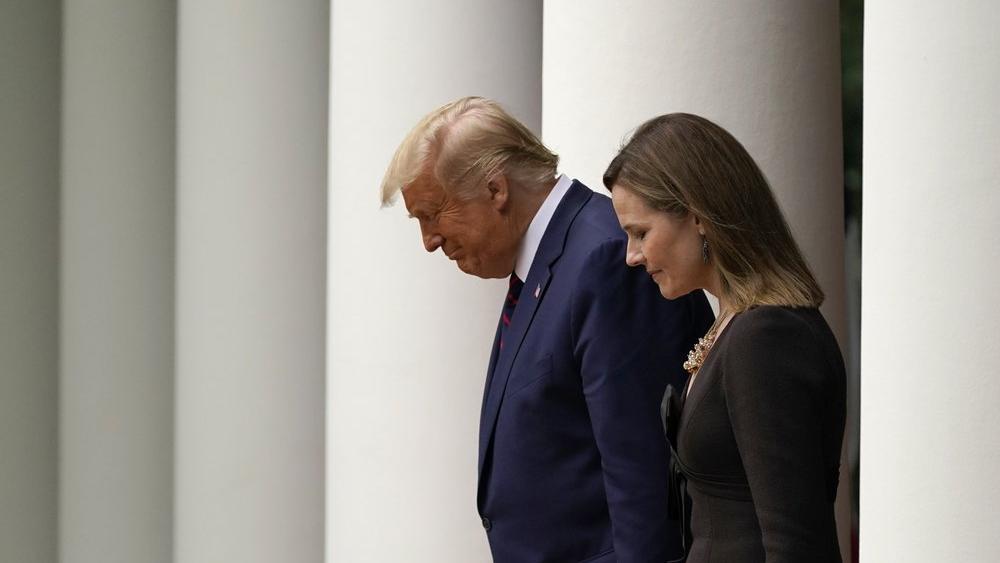 It is official. President Donald Trump has nominated Amy Coney Barrett for the Associate Justice of the Supreme Court. After eight days of intense speculation, Trump made his decision public from the Rose Garden Saturday evening.

“I looked and I studied, and you are very eminently qualified,” said the President, with Barrett standing alongside him.

Republican Senators are already pushing for a swift confirmation for Barrett, 48, who would be the youngest currently serving on the High Court. Many are looking to complete the process before the Nov. 3 election. She would be the sixth justice on the nine-member court to be appointed by a Republican president, and the third nomination for President Trump’s first term in office.

"Should I be confirmed, I will be mindful of who came before me. ...Justice Ginsburg began her career at a time when women were not welcome in the legal profession but she not only broke glass ceilings, she smashed them. For that, she has won the admiration of women across the country and indeed all over the world."

The nominee also talked of her admiration for Ginsburg's close relationship with Justice Antonin Scalia, her mentor.

The two "disagreed fiercely in print, without rancor in person. ...These two great Americans demonstrated that arguments, even about matters of great consequence need not destroy affection. In both my personal and professional relationships I strive to meet that standard."

Barrett also said her judicial philosophy is the same as Scalia's.

"I clerked for Justice Scalia more than 20 years ago but the lessons I learned still resonate. His judicial philosophy is mine, too. A judge must apply the law as written, judges are not policy-makers and they must be resolute in setting aside any policy views they might hold."

Barrett is a justice on the 7th U.S. Circuit Court of Appeals. Prior to this role, she was a law student and then a law professor at Notre Dame.

Barrett’s husband, Jesse, is a former federal prosecutor. The South Bend, Indiana couple has seven children, including two adopted from Haiti and a young son with Down syndrome. All are younger than 20.

Barrett caught the eye of the Trump administration in 2017 when she was confirmed to the appeals court on a party-line vote, with Democrats attacking her Catholic faith.

The president also interviewed her in 2018, following the retirement of Justice Anthony Kennedy. But in the end, President Trump chose Brett Kavanaugh.

At the conclusion of the Rose Garden announcement, President Trump joked the confirmation process “should be easy” and “extremely non-controversial."

He encouraged Democrats to take up her nomination swiftly and to “refrain from personal and partisan attacks.”