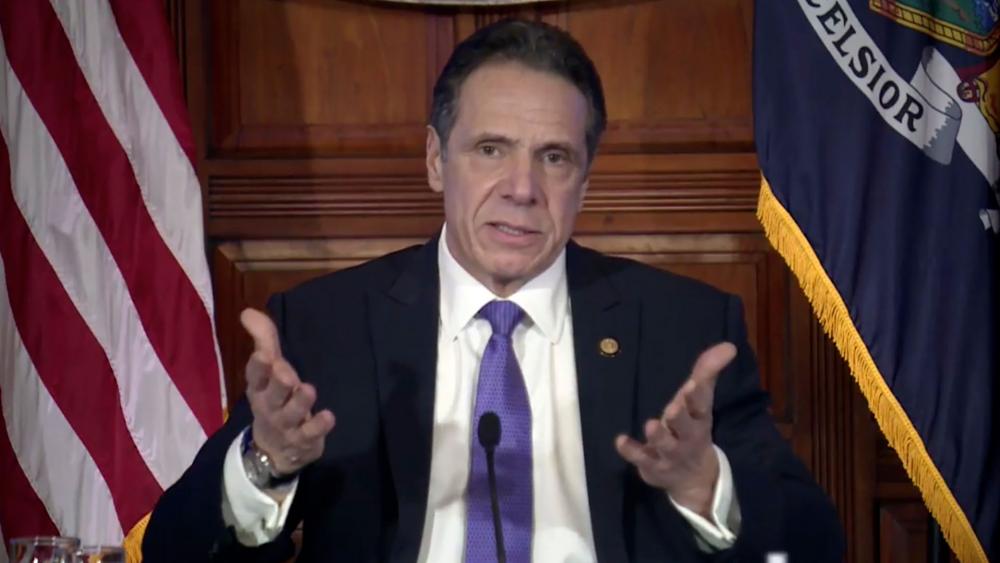 ALBANY, N.Y. (AP) — New York Gov. Andrew Cuomo intends to remain in office in the face of sexual harassment allegations that have weakened his support and led to calls for his resignation, he said Wednesday.

The Democratic governor, speaking somberly in his first public appearance since three women accused him of inappropriate touching and offensive remarks, apologized and said that he “learned an important lesson” about his behavior around women.

“I now understand that I acted in a way that made people feel uncomfortable,” Cuomo said. “It was unintentional and I truly and deeply apologize for it.”

Cuomo said he will “fully cooperate” with an investigation into the allegations being overseen by the state's independently elected attorney general. Attorney General Letitia James, also a Democrat, is in the process of selecting an outside law firm to conduct the probe and document its findings in a public report.

Asked about calls for him to step aside, the third-term governor said: “I wasn’t elected by politicians, I was elected by the people of the state of New York. I’m not going to resign."

Cuomo addressed the allegations during a news conference that otherwise focused on the state’s response to the coronavirus pandemic, the kind of briefings that made him a daily fixture on TV and a national star among Democrats.

Before that, Cuomo last spoke to reporters during a conference call on Feb. 22. His last briefing on camera was on Feb. 19.

Two of the women accusing Cuomo worked in his administration. The other was a guest at a wedding that he officiated.

Former aide Charlotte Bennett, 25, said Cuomo quizzed her about her sex life and asked whether she would be open to a relationship with an older man. Bennett said she believed he was gauging her interest in an affair.

Another former aide, Lindsey Boylan, said Cuomo commented on her appearance inappropriately, kissed her without her consent at the end of a meeting, and once suggested they play strip poker while aboard his state-owned jet. Cuomo has denied Boylan’s allegations.

Anna Ruch, told The New York Times that Cuomo put his hands on her face and asked if he could kiss her just moments after they met at a September 2019 wedding in Manhattan.

The accusers rejected his latest attempt at an apology.

“How can New Yorkers trust you @NYGovCuomo to lead our state if you “don’t know” when you’ve been inappropriate with your own staff?” Boylan tweeted.

She said Cuomo's claim that he was unaware he had made women uncomfortable was disingenuous, considering that Bennett had reported his behavior to her boss and one of Cuomo's lawyers.

“We are confident that they made him aware of her complaint and we fully expect that the Attorney General’s investigation will demonstrate that Cuomo administration officials failed to act on Ms. Bennett’s serious allegations or to ensure that corrective measures were taken, in violation of their legal requirements,” Katz said.

Cuomo said he inherited his gregarious way of greeting people from his father, the late former Gov. Mario Cuomo, and that he intended it as a way of welcoming people and making them feel comfortable. He said he realizes now, “it doesn’t matter my intent, what it matters is if anybody was offended by it.”

Speaking about the allegations, Cuomo initially said he was apologizing to “people” who were uncomfortable with his conduct, but he didn’t make clear as he continued which of the women he was referring to.

At one point, he said he was apologizing to “the young woman who worked here who said that I made her feel uncomfortable in the workplace,” though that description could apply to both Boylan and Bennett.

The governor, who has touted a law requiring all workers in New York to receive sexual harassment training, did not acknowledge that sexual harassment centers on how the victim is impacted by inappropriate behavior — not the offender’s intent.