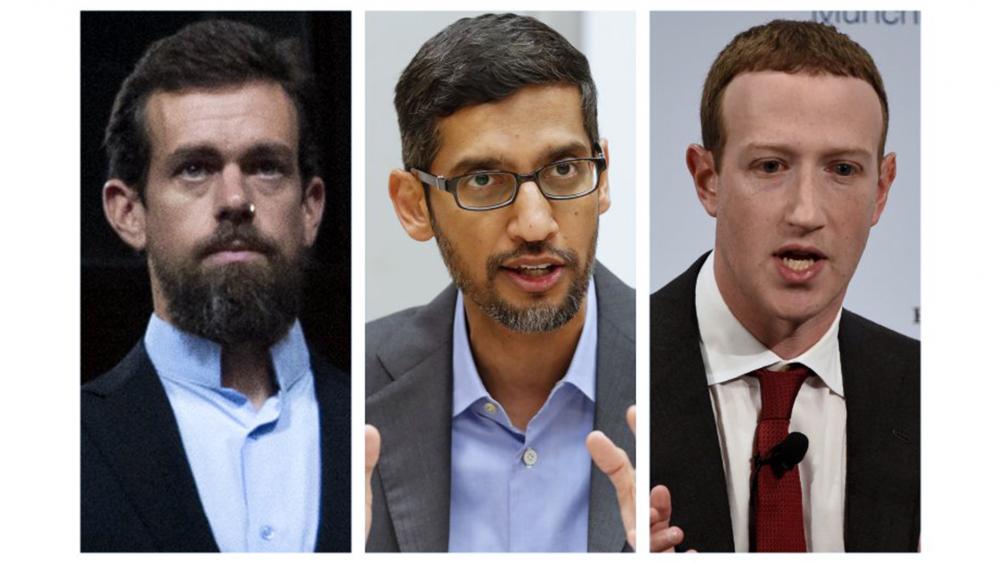 While some conservatives have been upset at how much Big Tech has been censoring and de-platforming them, congressional Democrats Thursday were demanding that Facebook, Google and Twitter do even more censoring or face the wrath of Congress, which would be forcing them to do it.

U.S. Rep. Frank Pallone (D-NJ), chairman of the House Energy and Commerce Committee, went so far as to suggest the social media platforms are guilty of aiding and abetting what the Democrats consider misinformation by those they deem extremists.

Time for Congress to Legislate

"It is now painfully clear that neither the market nor public pressure will force these social media companies to take the aggressive action they need to take to eliminate this information and extremism from their platforms," Pallone charged at a virtual hearing with the heads of Facebook, Google and Twitter.  "And therefore it's time for Congress and this committee to legislate and realign these companies' incentives. Today, the law gives these companies and their leaders a blank check to do nothing rather than limit the spread of disinformation."

Facebook Chairman Mark Zuckerberg answered, "I don't think anyone wants a world where you can only say things that private companies judge to be true. Where every text message, email, video and post has to be fact-checked before you hit Send."

'It's Not Possible to Catch Every Piece of Harmful Content'

Zuckerberg added, "It's not possible to catch every piece of harmful content without infringing on people's freedom in a way that I don't think we'd be comfortable with as a society."

U.S. Rep. Mike Doyle (D-Ohio) suggested the Big Tech media platforms haven't done enough to rid the internet of voices that don't totally go along with governments' views on the COVID-19 virus and the vaccines meant to fight it.

"Our nation is in the middle of a terrible pandemic. Nearly 550,000 Americans have lost their lives to this deadly disease – more than any other country on the planet," the Ohio congressman said. "And an independent study found that on Facebook alone, users across five countries, including the United States, were exposed to COVID disinformation an estimated 3.8 billion times, again despite claims of fixes and reforms."

'One of the Biggest Reasons People are Refusing the Vaccine'

Doyle added, "Now as the Biden administration is working to implement the American Rescue plan and get vaccines in people's arms, we are faced with waves of disinformation on social media about the safety and efficacy of these shots. These vaccines are our best chance we have to fight this virus.  And the content that your websites are still promoting, still recommending and still sharing is one of the biggest reasons people are refusing the vaccine."

Some committee Democrats went so far as to say the media giants push internet users towards the fringes because people hanging out there tend to use the internet more and make the media giants more money. The Democrats accused Facebook, Google and Twitter of profiting from the continued presence of extremist sites and voices rather than doing their utmost to remove such sites and voices off their platforms.

Zuckerberg, Google's Sundar Pachai and Twitter's Jack Dorsey all faced angry calls from Democrats to do more censoring of what they label "misinformation."

On the other hand, when their turn came, some committee Republicans blasted Big Tech's silencing of conservative ideas and voices.

'This is Fundamentally Un-American'

U.S. Rep. Bob Latta (R-Ohio) stated, "Your companies had the power to silence the president of the United States, shut off legitimate journalism in Australia, shut down legitimate scientific debate on a variety of issues, dictate which articles or websites are seen by Americans when they search the internet."

"We're all aware of Big Tech's ever-increasing censorship of conservative voices and their commitment to serve the radical progressive agenda by influencing a generation of children and removing, shutting down or canceling any news, books and even now toys that aren't considered 'woke.' This is fundamentally un-American," Latta continued.

In a recent interview with a New York Times columnist, even socialist Senator Bernie Sanders expressed concerns over President Trump being banned from Twitter.

"This is a bad news guy," he said. "But if you're asking me do I feel particularly comfortable that the then-president of the United States could not express his views on Twitter? I don't feel comfortable about that."

Twitter's Dorsey answered all the criticism from committee members from both parties.

"We are a bunch of humans with a desire to make the world around us better for everyone living today and those who come after us," he said. "We make mistakes in prioritization and in execution. We commit to being open about these and doing our best to remedy what we control."