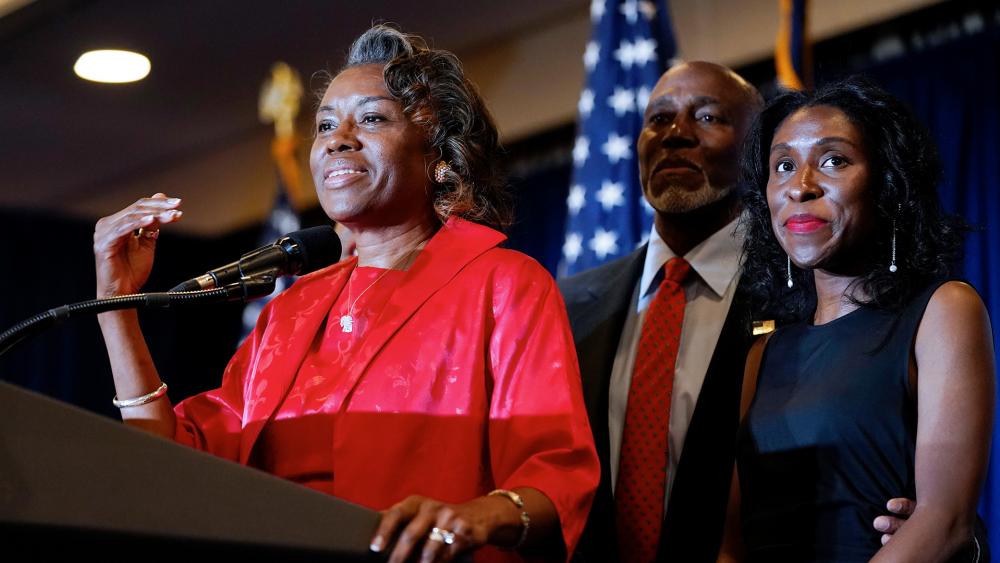 While all eyes were on the two men at the top of the ticket in Virginia — Republican Glenn Youngkin and Democrat Terry McAuliffe — one woman was making history.

Winsome Sears, the lieutenant governor-elect of Virginia, burst onto the stage in the wee hours of the morning Wednesday to celebrate her victory alongside Governor-elect Youngkin, telling those at the election night watch party in Chantilly, Virginia, that she is living “the American dream.”

The U.S. Marine Corps veteran said she was “at a loss for words for the first time in my life,” but nevertheless gave credit to God for her historic win as the commonwealth’s first female and first black American to win the lieutenant governorship.

“God bless you,” she told the rowdy crowd at the end of her speech, thanking her “ragtag” staff for their tireless efforts. “We ran an impossible, improbable campaign. … God was exactly with us, otherwise we would never have made it. And so I want to finish up by thanking you, Jesus. How sweet it is!”

During her brief but exuberant speech, Sears pushed back against those seeking to further pit Virginians — and Americans writ large — against one another.

“I say to you, there are some who want to divide us and we must not let that happen,” she said. “They would like us to believe we are back in 1963, when my father came [to America]. We can live wherever we want, we can eat where we want. We own the water fountains. We have had a black president elected not once but twice and here I am: living proof. In case you haven’t noticed, I am black and I have been black all my life.”

Sears, a Regent University graduate with a master's degree in organizational leadership, went on to tell supporters education, which was a central issue in the gubernatorial race and a bedrock of Youngkin's campaign, "lifted me out of poverty."

“Education will lift us all out of poverty, because we must have marketable skills so that our children can not just survive, but they will thrive, and they recreate generational wealth,” she said. “That’s what this is about.”

She noted that, when she first joined the military, she was still Jamaican. The 57-year-old Sears said the U.S. “has done so much for me, I was willing to die for this country.”

The lieutenant governor-elect also vowed Virginia will have a “transparent government” with “safer neighborhoods, safer communities, and our children are going to get a good education.”

“And as I used to say as we were on the trail: Hold on, help is on the way! The cavalry has arrived!” Sears, who served a single term in the Virginia House of Delegates from 2002 to 2004, declared.