'Amazed at How God Brought Us Here': Rep. Barry Moore, Wife Share Journey of Faith that Led Him to the Halls of Congress 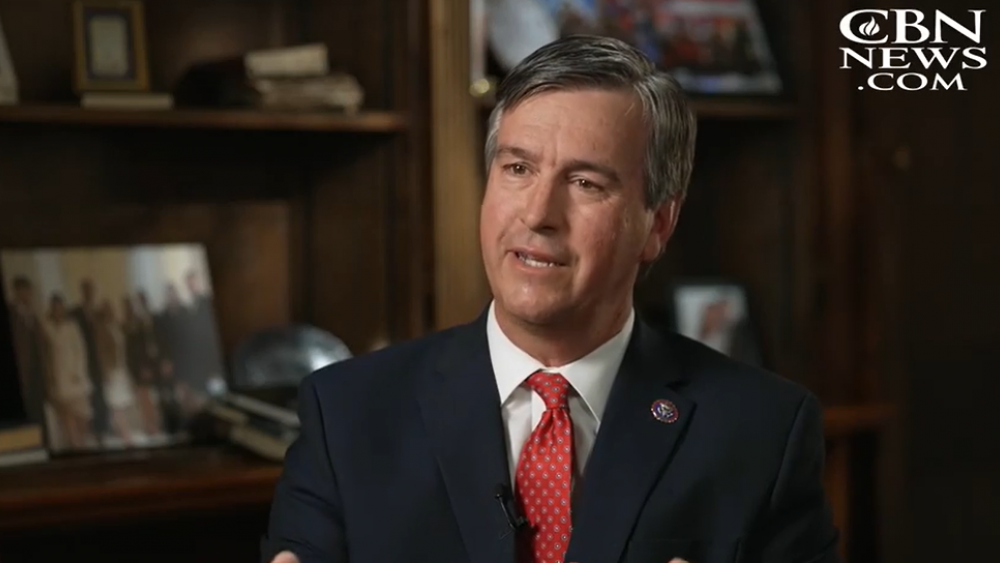 Image source: CBN News
6290019957001
'Amazed at How God Brought Us Here': Rep. Barry Moore, Wife Share Journey of Faith that Led Him to the Halls of Congress

It's not often you walk into a fraternity house and find CBN's The 700 Club on the television, but for one congressman, that's exactly what he found playing one day when he heard a message that changed his life.

Congressman Barry Moore grew up in a church community. Like many teenagers, he strayed away from his faith until God got his attention in a place he least expected.

"I was actually in a fraternity house in Auburn, Alabama, of all places, and Pat Robertson was on the TV," Moore told CBN News.

During that time, Moore wasn't close to the Lord. Yet he found himself drawn to the message that was shared.

"There was just something he said that day on The 700 Club, that I was just watching the TV and I found myself prone before the Lord with tears in a fraternity house and that began that process of kind of redirecting my path."

But God's timing was perfect. About a week later, Moore met his future wife, Heather.

"I'm like, is this guy for real?" laughed Heather. "Is he for real trying to convince me that he was watching Pat Robertson in his fraternity house? And sure enough, it was true. That kind of started my and Barry's relationship."

Both are confident that God called them to be together.

"We're a good team," the congressman said. "Her understanding politics and having a passion for that and me just being a country boy from South Alabama being called. I tell everybody, 'I was in the garbage business,' but the transition from the garbage business to politics was pretty easy to make, so the Lord kind of called me into this life."

Barry told CBN News that politics wasn't always a part of the plan.

"It was the last thing on earth I wanted to do. I actually told the party 'no' when they asked me to run for the state legislature in 2006," he said.

Two years later, Barry had a change of heart.

"In 2008, I think it was President Obama said, 'We are no longer a Christian nation,' and I told Heather, we must engage. We cannot sit on the sidelines any longer."

Then in 2010, Barry got elected to the state legislature.

"The Lord just kind of directed our paths to do that. Through that process, I became labeled the most dependable conservative vote in the legislature in 2014. That put a bulls-eye on my back."

During his first re-election campaign, Barry was arrested on charges of felony perjury. He was indicted on two counts of perjury and two counts of making false statements to a grand jury in a case probing allegations of corruption in the State House.

"I was facing 40 years in prison. That was the process where the Lord really began to transform me," he said.

Barry planned to drop out of the race, but his family stepped in and encouraged him to stand and fight.

"I think I could've cut a deal and walked away, but because of my 12-year-old son and his faith in the book of Daniel and how Daniel and those guys stood that we needed to go through the fiery furnace," he said. "I tell everybody we came out without even the smell of smoke."

Barry won re-election before he was found not guilty on all charges. After the trial, he wanted out of politics, but God had other plans.

"No doubt, I wanted to get out and so I actually term-limited myself."

While in Washington D.C. for former President Donald Trump's inauguration, a couple stopped Barry at breakfast and prophesied over him.

'"The Lord says you've been reluctant – you've been unwilling to take the mantle He's placed upon you, but God says he's going to give you the wisdom and understanding to do what I call you to do,'" the couple told him.

Barry said those supportive words inspired him to run for U.S. Congress in 2018. Unfortunately, he lost the race.

"It was that January 21 prophecy that gave me so much encouragement to be here now, and those people didn't know me from Adam," Barry recalled.

"I couldn't let it go," Heather said. "God kept telling me Barry's going to be in Congress."

Two years later, while Heather was driving, God told her a door was about to open.

"Barry called me and said that our Congresswoman was retiring, and I said, well you're running. He said 'No, we need to' – I said no. God spoke to me two days ago and said a calling was coming and that we don't walk, we run. And he said, 'Well, okay then.'"

Barry ran again – barely making it into a primary runoff.

He somehow won the nomination and election, which is still a surprise to Heather.

"I will never, ever not be amazed at being here and how God brought us here," she said.

In Congress, Barry and Heather continue to go where God leads them.

"Man, we do not have the answers for the future of our country," Barry explained. "The Republicans nor the Democrats, no matter how smart we are, how brilliant we are, how good a public speaker we are. To save this nation, we must turn back to Him."

Congressman Moore says one thing he's learned is that even though he can't make as big of a difference as he'd like, he's trusting God in the process and seeking His wisdom for how to lead our country forward.

In 2014, State Rep. Moore was indicted on two counts of perjury and two counts of false statements to a grand jury in a case probing allegations of corruption in the State House. He was acquitted of all charges. MORE HERE: Jury finds Barry Moore not guilty on all counts