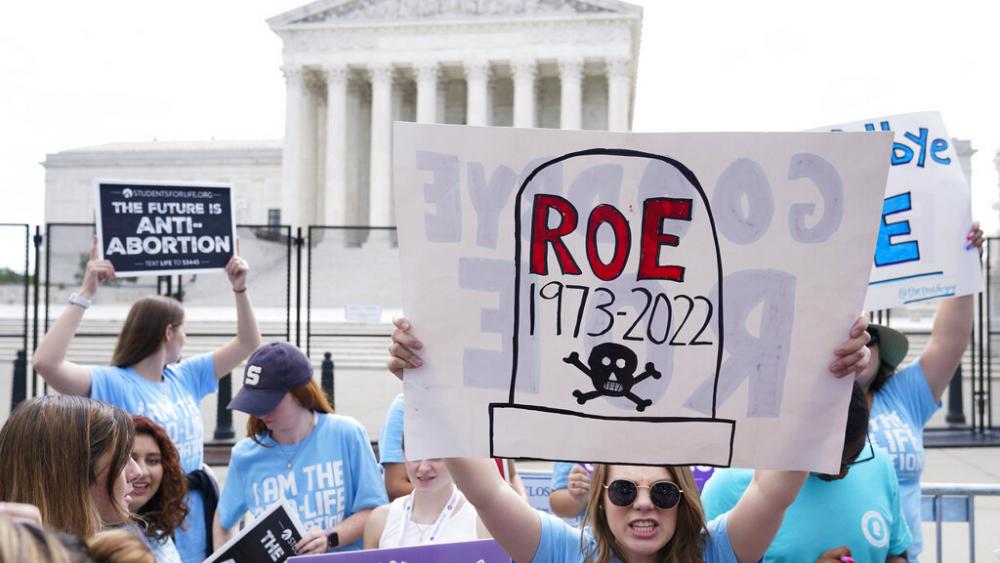 Now that the Supreme Court has overturned Roe v. Wade, the fight for life moves to the individual states. Each one will make its own decision on whether or not to outlaw abortion.

The historic decision has led to celebrations for pro-lifers, some of whom have fought for life for half a century while others are just getting started. Lydia Taylor of Students for Life cheered, "I've been working and praying for like five years for this day."

On the other side, an abortion-rights supporter spoke at a rally saying, "The attack on abortion is connected to the entire attack on bodily autonomy and equal rights."

The outcry from the pro-abortion crowd has turned criminal with some committing acts of arson against crisis pregnancy centers in Virginia and Colorado, leaving behind spray-painted warnings that the offices are no longer safe.

The abortion decision has also sent shockwaves through Washington.

Sen. Lindsey Graham (R-SC) explained, "All of us in the conservative world have believed there was nothing in the Constitution giving the federal government the right to regulate abortion. There's nothing in the Constitution that gives the right to abortion as a constitutional principle. This was judge-made 'out of cloth' law. Now what this court has done is take us back to pre-1973. This is a huge victory for the pro-life movement."

But the ruling has Sen. Elizabeth Warren (D-MA) and other Democrats calling for packing the Supreme Court with new progressive judges.

But many felt this ruling was a long time coming. For decades, even liberal pro-choice experts said Roe v. Wade was poorly reasoned and wasn't based on the Constitution.

Liberal political analyst Michael Kinsley wrote, "Although I am pro-choice, I was taught in law school, and still believe, that Roe v. Wade is a muddle of bad reasoning and an authentic example of judicial overreaching."

Even Ruth Bader Ginsburg wrote in 1985 before joining the high court that Roe's "Heavy-handed judicial intervention was difficult to justify and appears to have provoked, not resolved, conflict."

Turns out Ruth Bader Ginsberg agrees with Sam Alito. RBG on Roe: “Nine unelected judges decide this question for the nation. It should be decided by the people’s elected representatives, by the members of the state legislatures.” Watch 2:50 in. https://t.co/NvfID53HOR #RoeVsWade

Joe Biden himself used to have a very different view on abortion. In a 2006 interview, Biden stated, "I do not view abortion as a choice and a right. I view it as a tragedy. And I think it should be rare and safe and I think we should be focusing on how to limit the number of abortions and there ought to be a common ground and consensus to do that."

Even though Democrats have moved more and more to the left on abortion over the years, with many supporting the idea of almost no restrictions, the public clearly favors limits on abortion.

An ABC poll found that 58 percent believe abortion should be legal in all or most cases.

But an AP/NORC poll last year showed that 65% believe abortion should usually be illegal in the second trimester, and 80% said that about the third trimester.

Now It's in the Hands of Each State

Far from deciding the matter, the Dobbs decision to overturn Roe has simply sent the abortion issue back to the states.

So far, 26 states have or will ban or restrict abortions, while it will remain legal in 20 other states.

More than 30 Democratic senators sent a letter to Joe Biden over the weekend urging him to take "bold action" on abortion rights.

Democrats are hoping the high court's abortion ruling can somehow boost their fortunes in the congressional midterm elections where they're facing serious losses to Republicans.