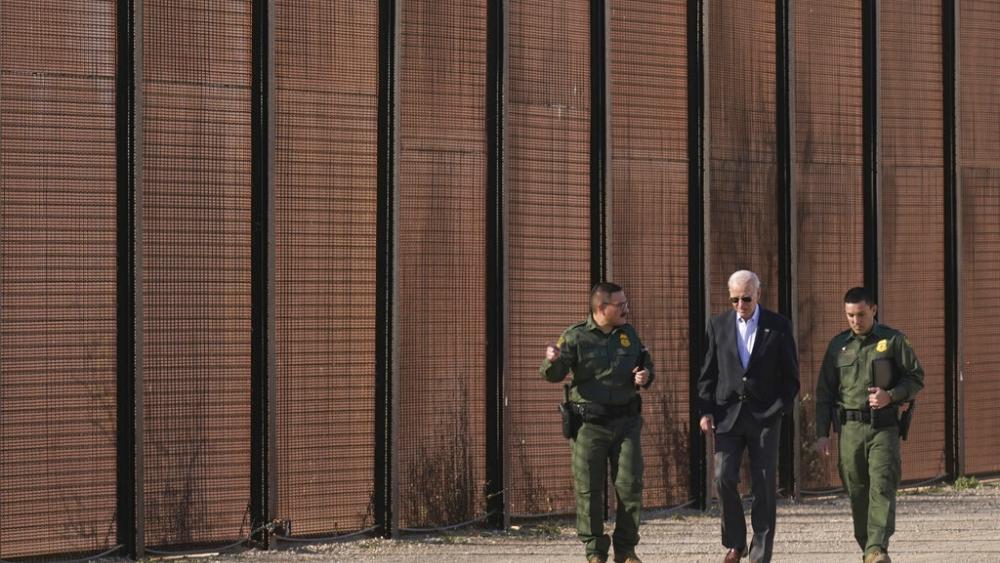 After two years in office, President Biden made his first trip to the southern border on Sunday. The visit follows months of Republican criticism that he's ignoring a crisis amid record numbers of illegal crossings.

It also came just days after the Biden administration announced new policies to address the growing influx of migrants. During his visit to El Paso, Texas, Biden toured a migrant service center, met with border patrol agents, and made an unannounced stop at the border wall.

"They need a lot of resources. We're going to get it for them," Biden told a pool reporter during his visit.

The trip follows Biden's decision last week to crack down on the massive surge of illegal crossings. His new policy has upset many Democrats and human rights activists. It will allow up to 30,000 migrants each month from Cuba, Nicaragua, Haiti, and Venezuela to legally apply for asylum, while expelling migrants from those four countries who cross illegally.

The number of migrants crossing the U.S.-Mexico border has risen dramatically during Biden's first two years in office. Last year alone, authorities report there were more than 2.38 million stops at the border, with El Paso being one of the busiest entry points. That's the first time the number has ever topped 2 million.

Anna Giaritelli from the Washington Examiner described to CBN News what it's like around El Paso amidst the migrant surge.

"At this rate we've had 90,000 people released since mid-August," said Giaritelli. "You get to certain pockets downtown and you'll see in a block hundreds of people sleeping on the street outside of church, outside the greyhound bus station, it is very evident that there is a humanitarian crisis."

Giaritelli says border patrol agents she spoke with doubted whether or not Biden was going to get the real picture of what they're dealing with during his visit.

"President Biden is going to visit the port of entry, but he will not be down on the ground below that port where Gov. Abbott has sent in 700 National Guardsmen as well as state troopers," explained Giaritelli.

Texas Gov. Greg Abbott handed President Biden a letter during his visit laying out the state's needs from the federal government, but he also declared the visit was two years and $20 billion too late.

"This is nothing but for show unless it begins to enforce the immigration laws that already exist in the United States of America," Gov. Abbott told reporters.

Abbott says Biden told him he wants to work with him on the issue.

Even the Associated Press coverage of Biden's trip seemed to call him out, saying:

"Biden's nearly four-hour visit to El Paso was highly controlled. He encountered no migrants except when his motorcade drove alongside the border and about a dozen were visible on the Ciudad Juárez side. His visit did not include time at a Border Patrol station, where migrants who cross illegally are arrested and held before their release. He delivered no public remarks."

AP also reports that, despite 50 years in public service with countless international trips, Biden has spent little time at the U.S.-Mexico border. The only visit that the White House could point to was Biden's drive by the border while he was campaigning for president in 2008.