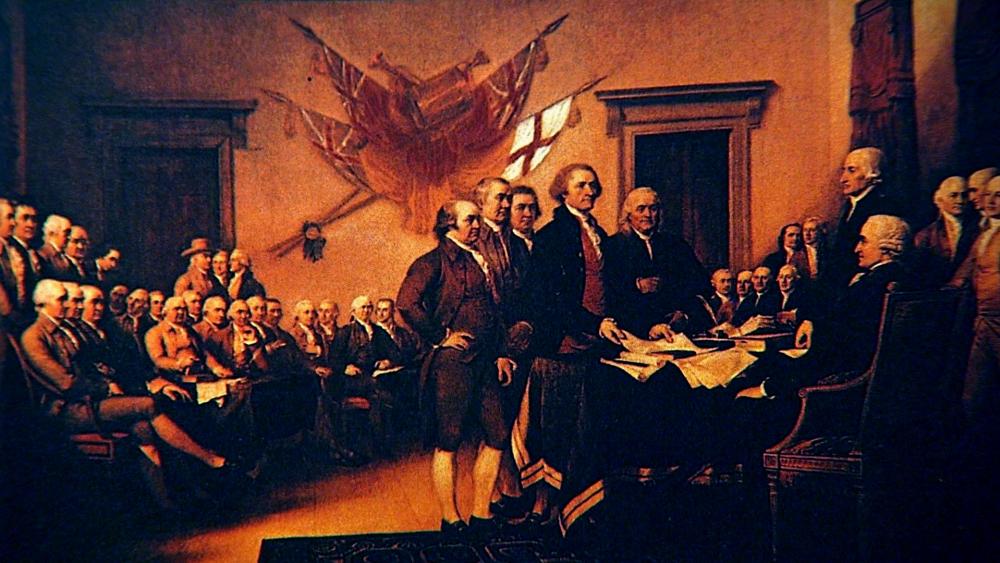 One of the ongoing debates concerning the start of the American nation is whether the founders meant to establish a Christian nation. That debate has caused many to wonder if we are disconnecting from our Christian foundation or reinterpreting the law to better reflect the secular intentions of our founding fathers?

Some argue America was not built on Christian principles and that even the founders had a weak faith. What many don't realize is that a massive revival broke out in the 1700s that left a radical mark on almost every founder.

Already, the Pilgrims had set a high spiritual standard with their 1620 covenant, the Mayflower Compact, to be a shining city on a hill to the world.

"They were very dissatisfied with the state of Christianity in the Old World," Rev. Eddie Hyatt, who outlines how Christianity shaped the nation in his book America's Revival Heritage, said.

"They did flee persecution in the Old World, but they also came to America with a vision for seeing a renewal and a reformation of Christianity and seeing it implemented in this New World," he said.

Living by Covenant, Not Kings

Hyatt explained the Pilgrims choice to live by covenant was also their way to declare no king or state religion would lord it over Americans.

Decades later, when William Penn and the Quakers moved into Pennsylvania, Hyatt explained they came with an intense vision.

The Quakers proceeded to avidly live out this belief that men should be ruled from within by God, not from without by government.

"An official from England came trying to find the government for Philadelphia, and he had trouble finding it," Hyatt said. "And when he did find it, there was nobody there because the governing council only met once or twice a year as they felt there was a need."

Here was another cornerstone of freedom and liberty being laid: the vision of moral men governing themselves in a land of extremely limited secular government.

But a problem for the colonies was that as they moved into the 1700s, their spiritual fervor was rapidly dying down. So desperate believers began to pray for revival.

Hyatt said both churches and governments joined in this effort. He pointed to the writings of a Puritan pastor in that era, William Cooper.

"He said from sabbath to sabbath they were praying specifically for an outpouring of the Holy Spirit and that God would revive his work," Hyatt explained. "Most of the churches set apart days to seek the Lord by prayer and fasting. Even the civil governments were concerned and they appointed days of fasting and prayer."

The prayers were answered and this revival, known as the First Great Awakening, hit from the 1720s to 1760s.

Rev. Jonathan Edwards, known mostly today for his scorching sermon, "Sinners in the Hands of an Angry God," was right in the middle of this revival.

Edwards was a child prodigy, starting Yale at age 13 and graduating at the top of his class at the age of 17. He was known to pray and study his Bible 13 hours a day.

This colonial pastor watched revival take over his hometown in western Massachusetts.

"The way he describes it: one day God invaded the town of Northampton," Hyatt said. "The town seemed to be full of the presence of God."

The bars emptied out and Edwards' home as well as other Christians' homes filled with people anxious to be saved and know God.

Visitors to the town spoke with amazement about the holy atmosphere they experienced blanketing the town.

"If you came across someone who seemed to be spiritually indifferent, it would be spoken of as a strange thing," Hyatt quoted Edwards.

Other towns and regions were also experiencing this spiritual outbreak, but then the powerful English preacher George Whitefield brought his fiery sermons to America.

Scorned by the established church, he preached salvation to huge multitudes outdoors. Crowds from 10,000 to as many as 30,000 showed up.

"During this time there were it seemed entire towns repenting and turning to God," Hyatt said. "It was an incredible movement to Christianity."

Psalm on Every Street

Whitefield stayed at Benjamin Franklin's home while preaching in Philadelphia. Franklin wrote of the revival's impact.

"From being thoughtless or indifferent about religion, it seemed as if all the world were growing religious, so that one could not walk through the town in an evening without hearing psalms sung in different families of every street," Franklin wrote.

Whitefield was praying a special prayer at this time for the colonies that would make a huge difference in their Revolution and future together.

Hyatt said Whitefield was praying that "they would not live as 13 scattered colonies, but as one nation under God."

And indeed the Great Awakening became the first national event the scattered colonies experienced as one. It unified them unlike any time before just in time to face the mighty British empire in war.

The revival also shaped the Founding Fathers core vision for America: that God sets men free, it's their natural right to have liberty and each is made to rule with Christ.

Its influence is all over the Declaration of Independence, U.S. Constitution, and Bill of Rights.

As he studied the founders, Hyatt found example after example of how deeply this Awakening influenced them and their Christian values. Take Thomas Jefferson for instance.

"He signed all presidential documents 'in the year of our Lord Christ,'" Hyatt explained.

Jefferson signed off on sending Christian missionaries to one Indian tribe and gave that tribe federal funds to build a church. He also attended Sunday services that met right inside the House of Representatives.

Hyatt pointed out these are hardly the acts of a man wanting to put a huge wall of separation between religion and government, as many portray Jefferson today.

Washington on his knees -- Praying

Today some scholars write doubtfully about the first president's faith. But a Quaker named Isaac Potts who lived near Valley Forge saw George Washington's faith up close during that cruel winter that almost froze the general's colonial army to death during the Revolution.

"I tied my horse to a sapling and went quietly into the woods, and to my astonishment I saw the great George Washington on his knees alone," Potts wrote. "He was at prayer to the God of the armies of heaven, beseeching Him to interpose with His divine aid, and for the cause of the country and of humanity, and for the whole world."

"Such a prayer I never heard from the lips of man...We never thought a man could be a soldier and a Christian, but if there is one in the world, it is Washington," Potts, who was anti-war like most Quakers, continued.

At the Constitutional Convention in 1787, the delegates fought and bickered so bitterly, the convention almost broke up.

But then Ben Franklin stood and began to preach.

"The longer I live, the more convincing proofs I see of this truth: that God governs in the affairs of men," the aging founding father reportedly said. "And if a sparrow cannot fall to the ground without His notice, is it probable that an empire can rise without His aid?"

Then Franklin beseeched them to pray together at the start of every day. After that, an atmosphere of peace and reconciliation came upon the founders.

"And they were able to proceed," Hyatt said. "And to finish their job of hammering out the American Constitution and Bill of Rights -- and in a context of prayer."

"I would say virtually all the founders directly, indirectly to one degree or another, they were affected, they were impacted by the Great Awakening," he said.

As America moved into the 1800s, its spiritual fervor began to chill again, and like before, desperate men prayed for revival.

It hit, starting at Yale where a third of the students were saved before it burst out on other campuses. Then it spread across the whole growing country, even out on the frontier.

Hyatt told CBN News what one Methodist circuit rider wrote about what he saw: "He said, 'It seemed like the whole country was coming to God.'"

Hyatt suggest in his book on revivals in early America this Second Great Awakening saved America from the influence of the bloody French Revolution, from Deism - the belief that God exists but is a distant, unconcerned entity - and the wild bawdiness of the Wild West.

Yet another revival hit in the late 1850s, just in time to cushion the blow of the mighty Civil War that almost ripped the nation apart.

"There have been Awakenings at different times. God has come at crucial times," Hyatt stated. "And I'm praying that God will use my book to help ignite a new desire and passion and vision in Christians that America can see another national spiritual Awakening."