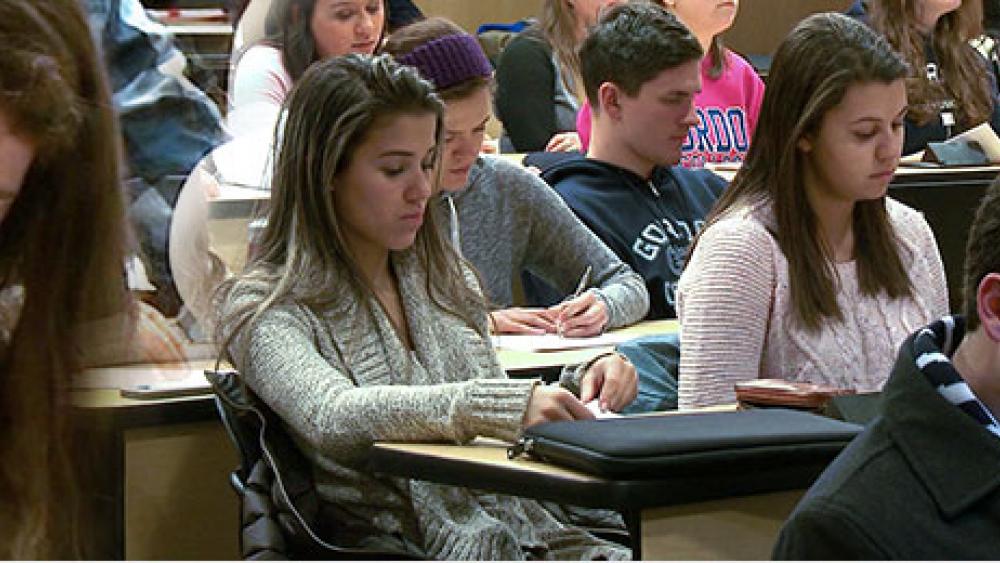 In the past, society approved and even praised such acts, but today that affirmation has been replaced by charges of discrimination and threats over accreditation.

If any Christian college is in the eye of the storm right now it's Gordon College in Wenham, Massachusetts, just north of Boston. It's historic views on sexuality have led some neighboring towns to sever ties with the school.

It's also facing questions about its historic statement of faith and conduct, which forbids homosexual behavior and heterosexual intercourse outside of marriage.

Gordon President Michael Lindsay is upbeat and upfront about the challenge.

"Christian colleges are at the tip of the spear of engaging on cultural issues and Gordon, being based here in New England, is at the vanguard of that," Lindsay told CBN News.

The New England Association of Schools and Colleges, Gordon's accrediting body, has asked for a September 2015 report from Gordon on its Statement of Life and Conduct.

The association's Commission on Institutions of Higher Education said it wants to ensure that the college's policies and processes are non-discriminatory, consistent with the commission's standards for accreditation.

Lindsay is overseeing a working group of trustees, faculty, staff and students to study the matter. The college also recently announced a "Life Together" taskforce, which will work on human sexuality issues on campus.

In addition, the college is expanding staff training on the issue, bolstering anti-bullying policies and considering more programming for students.

Lindsay said Gordon is committed to its statement.

"We do believe that as a voluntary moral community we should be able to set up the conditions, the boundaries of what makes you part of this community," he said. "That's actually a fundamental right that we have literally in the Bill of Rights, the freedom of association."

At the same time, Lindsay said the school wants to provide appropriate care for students grappling with same-sex attraction.

"We have had gay students," he said. "We do have gay students now and we want to pay attention to their concerns. We want to be as pastorally sensitive as we can."

Similar tensions are evident at other Christian college campuses across the country. At many schools, alumni and other stakeholders are questioning their college's views on sexuality.

The criticism from outsiders goes even deeper. A June 30, 2014 commentary in the widely regarded Chronicle of Higher Education questioned accreditation for any Christian college.

"Skeptical and unfettered inquiry is the hallmark of American teaching and research," Dr. Peter Conn, professor of English and education at the University of Pennsylvania, wrote. "However, such inquiry cannot flourish - in many cases, cannot survive - inside institutions that erect religious tests for truth. The contradiction is obvious."

"I think we are at a cultural location where faith has become pigeon-holed as stupidity, as irrationality, and has no place in the modern, educated person," he told CBN News. "And that is a very difficult place to be in."

Shirley Hoogstra, the new president of the Council for Christian Colleges and Universities (CCCU), acknowledged the cultural attacks in her January address to the 39th Annual Presidents Conference for CCCU presidents.

In an interview with CBN News, she disputed Conn's notion that critical thinking is not possible on Christian college campuses.

"We actually believe in the Christian college movement that we give the unfettered academic freedom, so we can talk about things of faith," she said.

"People don't necessarily understand why we have an allegiance to Scripture, to a Savior, to a Lord of our lives and so it might look fearful to some people," she noted.

Dr. Russell Moore, president of the Southern Baptists' Ethics & Religious Liberty Commission, believes the First Amendment will ultimately protect Christian colleges. He wants the culture to recognize a diversity of viewpoints and says that different faiths should stand together.

"We don't expect every college to teach evangelical Christianity or Mormon doctrine or Mary and devotion," he told CBN News. "We don't want that, but we want the kind of pluralism where those kind of colleges are allowed to exist and to flourish and then we have a debate."

"The way one has a debate in a free society is not by shutting off alternative ideas," he added. "It's by having more ideas and letting those ideas come out in the public and wrestle with one another to see whose ideas are better."

Moreno-Riano would like an entire redefinition of higher education.

In the meantime, Lindsay is optimistic about Gordon's future and its relationship with its accrediting body.

"It's my every expectation that places like Gordon will not only survive in the future, we're actually going to be thriving," he told CBN News.

Dr. Barbara Brittingham, president of the New England Association of Schools and College's Commission on Institutions of Higher Education, told CBN News that Gordon's accreditation is not on the line and stressed that the requested report is a "routine, follow-up report."

In our changing culture, however, the burden is still on Gordon and other Christian schools to defend just why and how they exist.