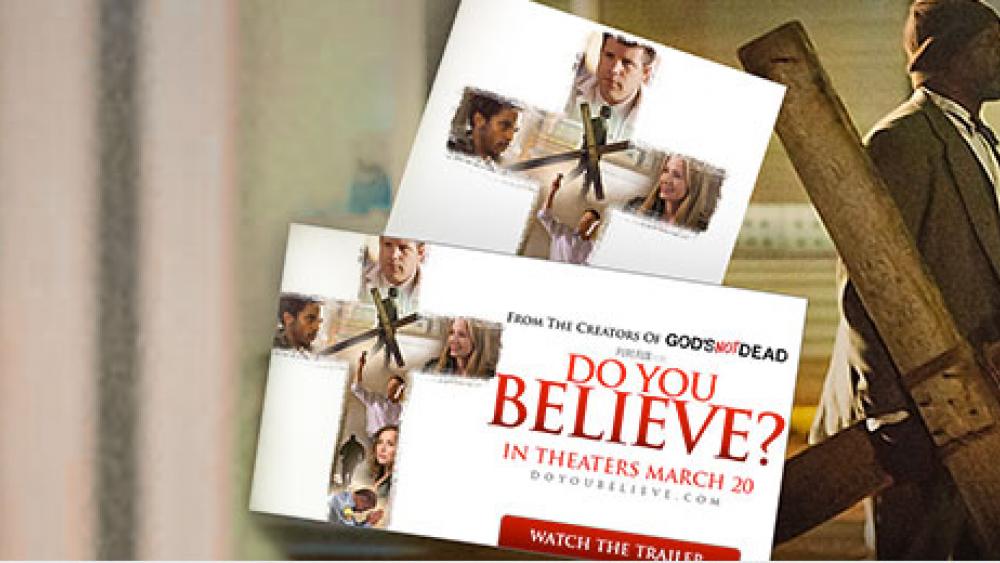 LOS ANGELES -- "God's Not Dead" broke box office records and became the highest grossing independent film of 2014. Now the film's creators are releasing their follow-up to the hit faith film. It is called "Do You believe?"

Critics call "Do You Believe" a faith version of the Academy Award-winning film "Crash."

The movie follows a dozen characters, moving in different directions. All of them are longing for something more as their lives unexpectedly intersect. The all-star cast includes Mira Sorvino, Lee Majors, Ted McGinley, and Cybill Shepherd.

Shepherd and McGinley spoke with CBN News about their roles in the project.

'What Attracted Me to the Role?'

Shepherd plays Teri, a grief-stricken mother who lost her daughter.

When describing that role, Shepherd told CBN News Teri is "frozen because she is not really letting herself feel her grief. It is too deep. And that is what made me want to play this role, the idea of going through that transition, where my character faces her grief about losing that child."

"It starts off with me putting what looks like blood on the cross and turning around to the audience, really, with just a very straight face and sort of confronting all of them," McGinley said of his role.

"So it is a little bit uncomfortable at first," McGinley continued. "But you see he begins to come around. But he is a guy who is going to tell you the truth because that's what he just encountered."

"Do You Believe" is the latest project from Hollywood actor and producer David A.R. White. His Pureflix production company has produced nearly 90 faith films in the nine years since it started. That hefty roster includes "God's Not Dead."

What does "Do You Believe" bring to the table for family friendliness that other films lack? Bob Waliszewski, Plugged In Online's director, answered this question and more. Click play to watch.

"I think it surprised everybody," White said, reflecting on the success of that movie.

"When we released the trailer in October, like six months before it came out, the trailer was shared between five and 10 million times. It was the number one shared page for that week on Facebook, so we had an idea that we had something special," he continued.

"And then the movement leading up to the release was really incredible. But never in a million years did we ever expect that it would do as well as it did and that people all over the world would support," he added. "And you would see these London, double decker buses with 'God's Not Dead' on it."

White prays his new film will have a similar impact.

"I think it is the script first and foremost. It moves them when they read it. I got a call from Delroy Lindo right after he read it. And his agent was like, he was acting the role out on the phone to his agent saying, 'I want to do this,'" he explained.

"And so, I think that is how that type of talent comes into it because it is not like the money we pay is extraordinary. Obviously there are so many other places that pay a lot more money, but people are really moved by the story," he said.

From a Place of Faith

"Do You Believe" delivers a story of both intensity and inspiration. And even many of the actors performed from a place of faith.

"I just know that God is there. I have no doubt. So, in my darkest deepest hours of pain and questioning, whatever comes along in your life, that at some point, you are not alone. And that is really comforting," McGinley told CBN News.

Shepherd noted, "I was raised in the Episcopal Church and then I chose to be confirmed. I sang in the choir and my faith was always there. I think being confirmed because you don't have to get confirmed and I still have that prayer book by my bed."

The film comes out on Friday, March 20.