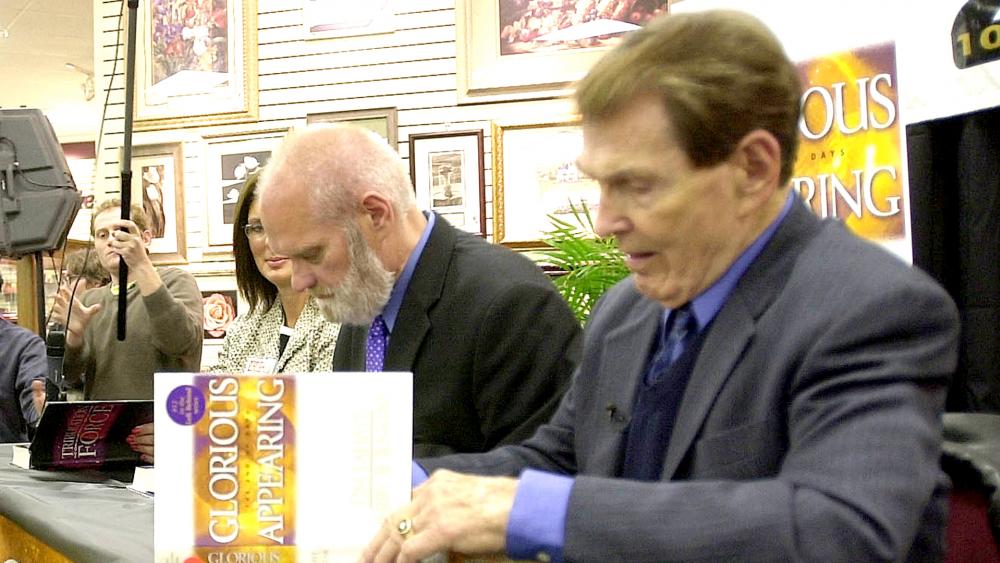 Tim LaHaye, pastor, evangelical leader and co-author of the Left Behind series, has died.

LaHaye passed away Monday in a San Diego area hospital, days after suffering a stroke. He was 90 years old.

The Air Force veteran is perhaps most well-known for his blockbuster best-selling book series, Left Behind, which he co-authored with Jerry B. Jenkins.

"Thrilled as I am that he is where he has always wanted to be, his departure leaves a void in my soul I don't expect to fill until I see him again," Jenkins said of his co-author's passing.

For 70 years, LaHaye ministered from the pulpit, in books, in the political sphere, and at home.

"The Tim LaHaye I got to know had a pastor's heart and lived to share his faith," Jenkins said. "He listened to and cared about everyone, regardless of age, gender, or social standing."

"If Tim was missing from the autograph table or the green room of a network television show, he was likely in a corner praying with someone he'd just met -- from a reader to a part-time bookstore stock clerk to a TV network anchorman," he continued.

His wife, Beverly, joined LaHaye for most of his journey. They married July 5, 1947.

Time magazine in 2005 called the LaHayes "The Christian Power Couple." The magazine also named LaHaye as one of the 25 most influential evangelicals in America.

LaHaye's family eventually settled in San Diego County, where he took the reigns of Scott Memorial Baptist Church, serving there for 25 years. The congregation expanded to three locations, including what is now Shadow Mountain Community Church in El Cajon.

Dr. David Jeremiah, successor to LaHaye at Shadow Mountain, said LaHaye and he had been friends for more than 40 years.

"From the very beginning, he has encouraged me and I have honored him," Jeremiah said in a statement. "Tim was one of the most godly men I have ever known. Almost every conversation I had with him ended with his praying with me and for me. We shared long lunches together talking about ministry and praying for our nation."

"When I look back over Tim LaHaye's life, I am reminded of Paul's words concerning King David. 'He served his own generation by the will of God (Acts 13:36),'" Jeremiah continued. "Tim's ministry will continue for many years through the books he wrote, the organizations he founded and the people that he influenced. But I will miss him when I look out from my pulpit next Sunday."

In 1972, he co-founded the Institute for Creation Research with the late Dr. Henry Morris.

As a couple, the LaHayes hosted a radio show, and later, a TV program called "The LaHayes on Family Life," which promoted Christian values.

During the 1970s, LaHaye helped bring together a coalition of Southern California pastors to address a progressive agenda that was undermining traditional family values.

Also in the 1970s, he encouraged the late Jerry Falwell, Sr. to establish the Moral Majority as a way to build a similar coalition nationally.

He was also widely credited with building up evangelical support for the campaign of former Presdient George W. Bush.

LaHaye also authored non-fiction works, writing 60 books that sold 14 million copies in as many as 32 languages. He wrote about family life, temperaments, the biblical view of sex and marriage, Bible prophecy, the will of God, Jesus Christ, and secular humanism.

Other ministries he either founded or co-founded include Tim LaHaye Ministries, the PreTrib Research Center, and the Tim LaHaye School of Prophecy at Liberty University.

LaHaye and his wife were also generous benefactors.

"One of the great things I saw Tim and Beverly do was to launch and fund a mission project in Atlanta. It was a mission church that is now a megachurch with 5,000 to 6,000 members," said Dr. Richard Lee, founding pastor of First Redeemer Church, the mission church supported by the LaHayes.

"If it hadn't been for Tim and Beverly, that work would have never started," Lee continued. "His life was more generous than most people can imagine. He was so quiet about his generosity."

In addition to his wife, LaHaye is survived by four children; nine grandchildren; 16 great grandchildren; a brother, Richard LaHaye; and a sister, Margaret White.