Granting Medal of Valor, Obama Says US Must Listen to Police 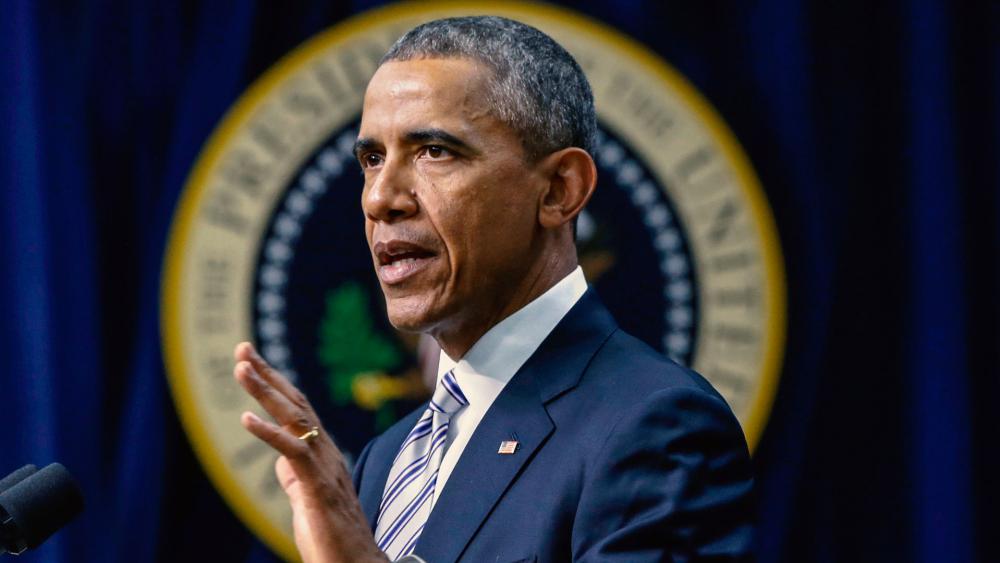 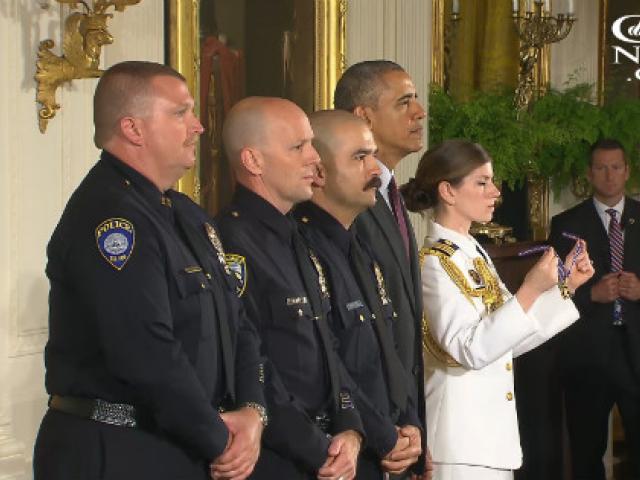 Granting Medal of Valor, Obama Says US Must Listen to Police

WASHINGTON - President Barack Obama called on the nation Monday to support and listen to its law enforcement officers as he bestowed the Medal of Valor on 13 officers who risked their lives to save others.

In a ceremony in the East Room, Obama draped the purple-and-yellow ribbons around the necks of officers who intervened in shooting rampages, hostage situations and an armed robbery. He pledged to keep working toward a bipartisan overhaul to make the criminal justice system fairer, smarter and more effective so that officers are well-equipped to enforce the country's laws.

"We can show our respect by listening to you, learning from you, giving you the resources that you need to do your jobs," Obama said. "Our country needs that right now."

Three Santa Monica, California, officers - Jason Salas, Robert Sparks and Capt. Raymond Bottenfield - were honored for their response to a 2013 rampage on a community college campus that left five people dead. Confronting 23-year-old gunman John Zawahri in the campus library, the officers shot and killed him when he pointed his assault weapon at them.

Obama also honored Gregory Stevens of suburban Dallas, who exchanged gunfire with two armed men outside an exhibit hall holding a provocative contest for caricatures of the Prophet Muhammad. Both gunmen were killed, heading off what investigators suspected was a planned mass shooting.

The Medal of Valor ceremony came as Obama holds out hope that legislation reforming the justice system can be passed this year despite the heavily politicized climate ahead of the November election. The need for change has been a rare point of common ground between Democrats and Republicans, and though momentum appeared to have sputtered earlier this year, a new Senate proposal has raised hopes that the issue could be successfully revived.

Attorney General Loretta Lynch, the nation's top law enforcement official, said there were no words or medals that could begin to pay the debt the country owes the officers.

"It has often been said that the price of freedom is constant vigilance," Lynch said. "Know this: they pay that price on our behalf."

Police Maj. David Huff of Midwest City, Oklahoma, saved a 2-year-old girl being held at knifepoint after negotiations with her captor deteriorated. Speaking to reporters after the ceremony, he described the thoughts running through his head in the moment he was called to action.

"Obviously, the last few moments were tense. There was a countdown going on," Huff said. "There was just no way I was going to let that little child get hurt."

The president said all of the officers acted "without regard for their own safety." Because of their courage and instincts, he said, the rest of society can go about their lives each day "like it's any other day."

"If they could go back in time, I suspect they'd prefer none of this had happened," Obama said.

One Philadelphia officer died from a gunshot wound and was honored posthumously. Sgt. Robert Wilson III drew fire from assailants during a robbery while saving store employees and customers.

Wilson's family accepted the award on his behalf.

"We honor those who didn't come home," the president said.

The other officers honored with the medal Monday are:

- Miami-Dade police Officer Mario Gutierrez, who was stabbed multiple times while subduing a knife-wielding man who tried to set off a massive gas explosion that could have caused massive casualties.

- Johnson City, New York, Patrolman Louis Cioci, who chased and captured at a crowded hospital a gunman who had just killed a fellow officer. Investigators believe Cioci saved the lives of hospital staff, patients and visitors.

- Los Angeles police Officer Donald Thompson for, while off duty, crossing two freeway dividers and braving first- and second-degree burns while pulling an unconscious man from a burning car to safety.

- Omaha, Nebraska, police Officer Coral Walker, who shot and killed a man who had killed and injured multiple people during a shooting rampage.

- North Miami, Florida, police Officer Niel Johnson, who endured gunfire from an assault weapon in pursuing and capturing a man who had shot a Miami police officer and two bystanders.

- FBI Special Agent Tyler Call, who while off duty with his family helped rescue a woman whose ex-husband was holding her at gunpoint.

- Niagara County, New York, sheriff's Deputy Joey Tortorella, who confronted and subdued a gunman who had shot and wounded his parents inside their home, preventing the gunman from threatening the safety of students at a nearby elementary school.