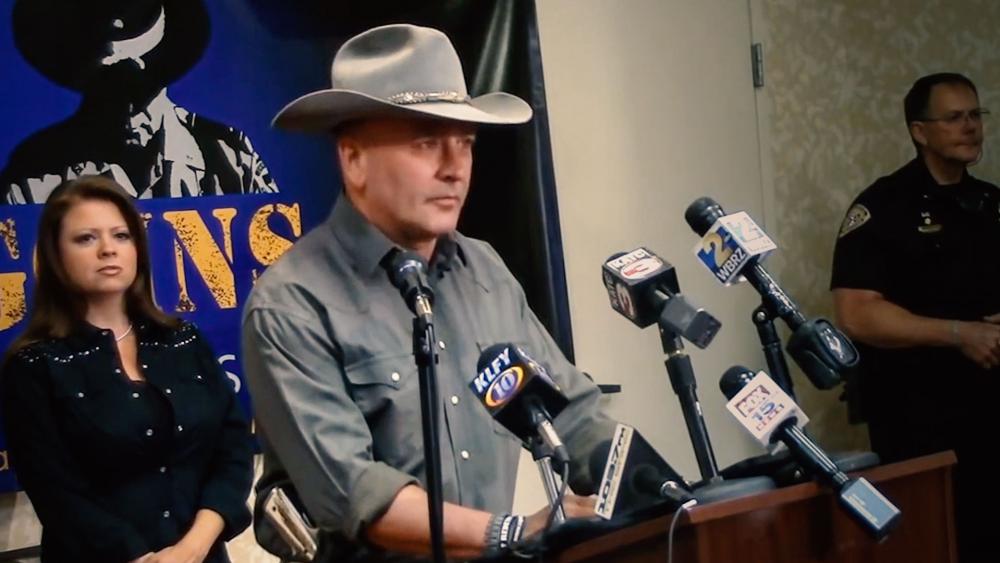 BATON ROUGE, La. -- They call him the Cajun John Wayne. His "Crime Stoppers" videos have been viewed on the Internet more than 100 million times.

Capt. Clay Higgins is a law officer in Louisiana whose no-nonsense messages to criminals have garnered appearances on talk shows and news programs around the country.

As a street cop and public information officer for the St. Landry Parish Sheriff's office in Louisiana, Higgins made a series of crime stopper videos that catapulted him into the national spotlight. But Higgins never expected to become famous.

"I'd never done anything like that before, it was completely unrehearsed and unscripted," Higgins said. "But I did my best with it."

From Businessman to Street Cop

Higgins' path to becoming a cop was a rocky one. He started his career as a businessman, and money was his biggest goal.

"I worked too much, I drank too much, I didn't have a real relationship with God," Higgins admitted. "And I just wasn't the man I was supposed to be. So in 1999, the mother of my children divorced me.  And rightfully so."

That event led Higgins to make some drastic changes in his life.

"I left that career that I had built and I took a job making $8 an hour as a street cop. It was like taking a vow of poverty," Higgins said.

It worked real well, by the way," he added. "I learned what it was to pawn a cherished item to pay a bill. I knew what the heartbreak of an eviction notice looked like, and yet happiness and joy came into my life and I began to really understand the word of God."

As a night shift cop, Higgins found his true calling.

Almost eight years later, he was asked to become the public affairs officer for the St. Landry Parrish sheriff's office.

"I had no idea that those messages would resonate so well through a television camera and become a source of such a great deal of attention. But they did," he said.

But it wasn't only successful in terms of worldwide recognition; the messages resonated with the criminals as well. The sheriff's office saw a consistent solve rate almost double the national average.

"Twenty-two children of God, 21 men and one woman, within hours or days of their crime or their fugitive status being featured on 'Crime Stoppers,' presented themselves to authorities and turned themselves in peacefully," Higgins said.

But the popularity came with a price. The ACLU in Louisiana took issue with his tough-guy stance, prompting the sheriff to tell Higgins to tone down his message.

"The sheriff and I just had a principled difference about how to respond to the world's response," Higgins said. "So I resigned, but not out of disrespect for my sheriff at all. You'll never hear me say a disparaging word about the man."

In his public resignation announcement, Higgins said, "Some horses just don't run with a bit in their mouth. I'm one of those horses. So though I love and respect my sheriff, I must resign."

"My wife and I live a humble life, man," Higgins told CBN News. "We live in a 65-year-old, 1,000-square foot, wood-frame home. For us to step away from that steady paycheck as a captain, shook me up."

But God had bigger plans for Higgins.

"It was during that time that thousands of American patriots messaged me, imploring me to seek federal office," Higgins recalled.

"I had many job offers, within an hour probably, had 20 good law enforcement job offers. But I've learned through my life to be patient and to let the Lord manifest his intentions for you on your path," he said.

Several weeks later, Higgins and his wife made their decision when he announced he is running for a seat in the U.S. House of Representatiaves.

Higgins hopes to apply his hard-nosed approach in Washington. He is one of three running for the open congressional seat, including former Lt. Gov. Scott Angellle and former state Rep. Brett Geymann.

The race is coming down to the wire.

"Listen, I'm an imperfect man driven by the perfect intent to serve my God, my country and my family," Higgins said.

Win or lose, Higgins hopes his effort will motivate like-minded men to follow his example.

"We all stand to gain by the restoration of America. And it's going to call for courage. I've said many times in my career that a man's character shouldn't be measured by how he falls, but by how he stands back up," Higgins said.

"In many ways our nation has fallen. And I do believe in my heart that my grandchildren will not measure my generation by the fact that we've allowed our nation to fall, which we have," he explained. "But we will be measured by how we stand this thing back up."