Franklin Graham Reflects on Trump's Inauguration and the 'Blue Wall' 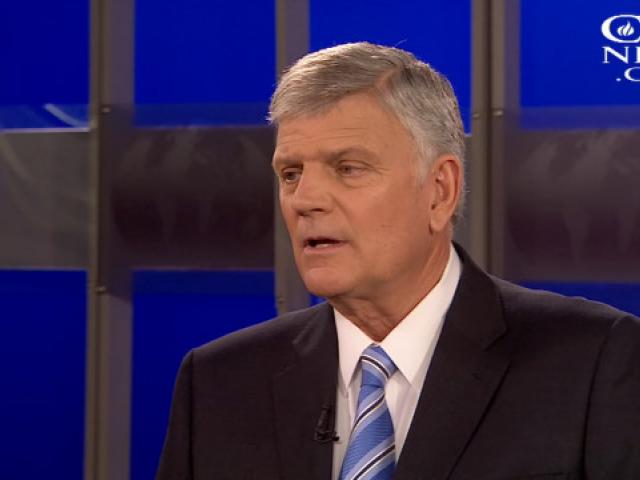 Rev. Franklin Graham talks with CBN News' Wendy Griffith about speaking at President Trump's inauguration, what the president said to him about his daughter, and about taking the Gospel to the "Blue Wall."

Wendy Griffith: "One of my favorite moments of the Inauguration was when you stood at the podium before your prayer and talked about the rain!"

Franklin Graham:  "It started to rain as soon as Donald Trump stood to take the oath of office – and it rained as he was speaking and as soon as he finished and sat down it quit raining. And I thought the liberal media will say it rained on his parade. And I thought, no, what does the Bible say about rain? It's a sign of blessing. We were scripted, (although) I chose my own passage of scripture but I thought, I'm just going to add my own little thought about rain. And I said Mr. President, in the Bible, rain is a sign of blessing, and it's my prayer God will bless you, your family, your administration and that God will bless the United States of America. And then I read my scripture but I wanted him to know that God always used rain as a sign of blessing."

Praying for the President

Wendy: " How did it feel to be one of the people selected to pray over our new President?"

Franklin Graham: "It's a great honor. I don't think I thought too much about what it felt like, My prayer was Lord, I want to honor you and I want to honor your son the Lord Jesus Christ so you always stand like that in fear but at the same time realizing that God has placed you there and He's put you there not to talk about yourself but He wants you to lift up the name of His son and that's what I wanted to do."

What the President Said About Graham's Daughter

Wendy:  "Your daughter, Cissie Graham Lynch,  prayed at President Trump's National Prayer Service at the National Cathedral the day after the Inauguration.  How did it feel to see your daughter in that role?

Franklin Graham: 'Well, it was kind of fun, I was sitting behind her, she was in front of me so she goes up to the lectern to pray and I take my camera and I'm going to take a picture and I put the camera down when she finished and I looked over at the President and he looked over at me and he points and says, then he goes like this (thumbs up) then at the end he came over to thank my daughter and he points to me and he said, 'she's better than you and she's better!' (laughs) I laughed and I thought it was so funny.

Wendy: "How is your Dad, Rev. Bill Graham doing?"

Franklin Graham: "Thank you for asking, He's at home, he's not able to get up anymore. He's confined to a bed or a wheelchair.  He doesn't hear or see very well but his mind is still good so we're grateful for that.

Wendy: "So when you visit he knows Franklin is here?"

Franklin: "He does but he doesn't communicate very well, he'll say, hello Franklin.  A couple of weeks ago I said Daddy this is Franklin. He said, 'Oh, where have you been?'"

Taking the Gospel to the Blue Wall

Wendy:  Any thoughts of running for office?

Franklin Graham: "No. But I do want to go back in 2018, I want to pierce the Blue Wall (The states in the Northwest and Northeast that vote primarily for the Democratic Party).  I'm going to go up the entire West Coast, then go up to New England in 2019, the entire Northeast up the blue wall, not to pierce it for Republicans or for politics but for the Gospel.  I want to take the Gospel into those areas because I think those are the most needy areas of the United States – the Blue Wall and I'm going to penetrate the Blue Wall for Christ.