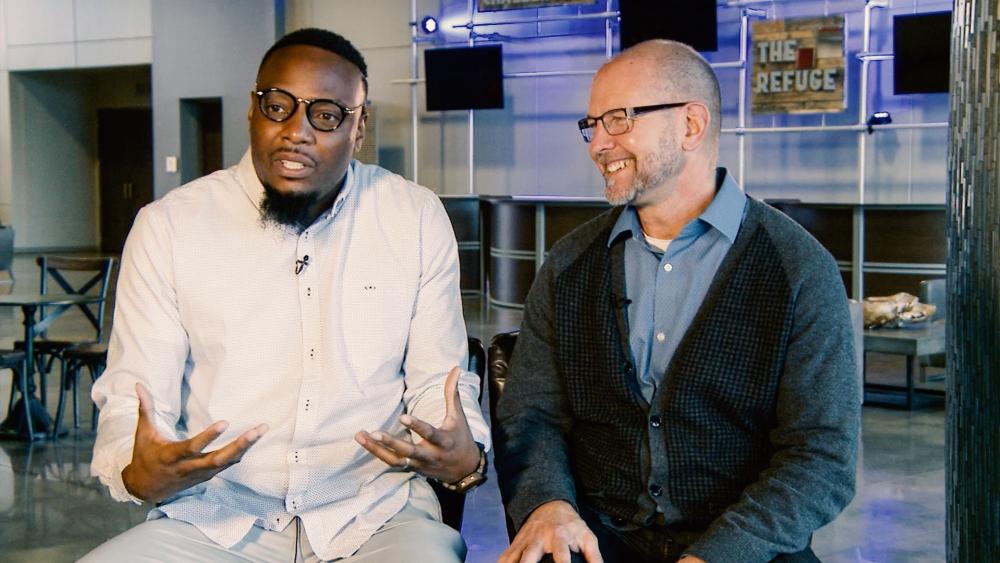 CHARLOTTE, N.C. -- Two churches in North Carolina, The Refuge and House of Refuge, recently came up with a plan to help change Charlotte's reputation from one of racial unrest to one of brotherly love.

Pastors Jay Stewart and Derrick Hawkins felt the best way to bring blacks and whites together starts with worship.

The churches held their first combined service on January 1, 2017.

Pastor Stewart leads the main campus of the multi-site church.

"The cry of our heart has always been revival," Stewart said in an interview with CBN News. "And the Lord cannot bring the outpouring of His spirit unless there's real unity."

Hawkins pastors the 200-member House of Refuge in Greensboro, which recently joined the larger Refuge family.

The Process of Becoming One Church

When Hawkins became pastor two years ago, he reached out to Stewart for advice after seeing a church sign for The Refuge. After a series of meetings, the two men explored the possibility of becoming one church.

Stewart said, "Nobody was looking for a merger. I just wanted to help this church in Greensboro transition well. So we were meeting on a regular basis and a year ago, I felt strongly prompted by the Holy Spirit to ask them a question. I said have you ever had conversations abut becoming a campus of The Refuge?"

"We would have meetings and talk about racism and what we both had to endure coming up. He would share his stories, I would share my stories," Hawkins explained.

Stewart and Hawkins said that the announcement about the merger came just two days before violent protests erupted in Charlotte, North Carolina, after an African American man was killed at the hands of police.

Late 2016, the announcement was made that the officer would not be charged in the death of Keith Lamont Scott.

Pastors Stewart and Hawkins agreed that the timing of the merger seemed divine.

"So I made the announcement of the merger September, 2016 to our church here. Less than 48 hours later, Charlotte unraveled and all of the riots broke," said Stewart. "I knew when I was sitting in my home watching the news coverage of what was happening with Charlotte that God wanted to write a better story, that God set the timing for this merger."

"The fist thing that comes to mind is, not our city, not so close to us," Hawkins said.  "I know that the African American community is hurting and crying out. We just wanted to be a voice, a vehicle of change in our own city, in our own community."

Bishop William and Darlene Allen are the founding members of the House of Refuge. During the process of appointing Hawkins as new pastor, the talks of a merger with The Refuge began.

The church's plan to hold regular combined services will help members of both congregations get to know one another and work toward racial healing.

"I just believe that what we're doing is so needed to replicate what the Lord wants to do in the kingdom of God," said Hawkins.

Stewart added, "There's a generation that wants to be valued, and I just saw it as an opportunity to say that you matter to God, you matter to us and God has a plan for your life."

Members say they are excited about working together.

"I think it just declares truth in the midst of a lot of lies that there is a church and she is taking her place and is committed to unity and love," said member Teri Furr.

Member Garrett Martin agreed. "Man, with what we're going through as a nation and especially here in Charlotte, I think that it just speaks of the unity of the kingdom and just gives us a real picture of what heaven is going to be like," he said.

Outreach Pastor Anthony White said seeing blacks and whites worshipping together in the city is long overdue and sends a powerful message to the nation.

"In the 1960s there was forced integration," he said. "I don't think that was God's heart. I think God wanted the church to lead by example and here again in 2016, integration should never be forced. It should be led by the spirit of the Lord and the church has an example to model that today," he remarked.

Meanwhile, Pastors Stewart and Hawkins both admitted that while coming together has not been easy, the result is well worth it.

"There were people sitting in the wings and we know that are still hoping this fails, that this doesn't work, for whatever reason, but we know it's gonna work. Because, listen, we don't see black and white. Under the blood of Jesus, everything is red," Stewart said.