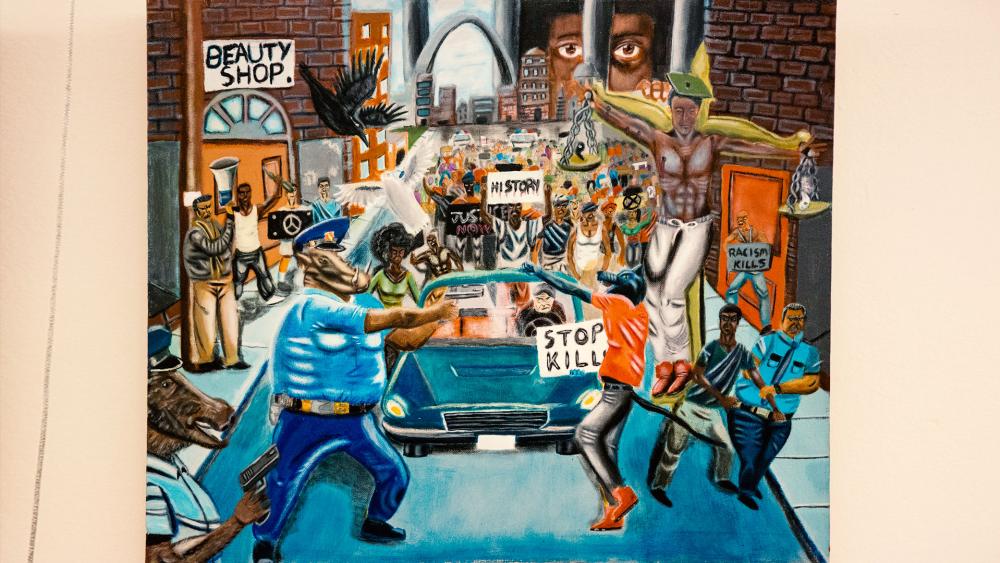 A painting by a high school student has sent off a battle in Congress.

The painting called Untitled #1 was created by former Missouri high school student David Pulphus and it depicts an image of a pig in a police uniform aiming a gun at a protestor.

It hangs in the Capitol hallway, along with hundreds of other works of art that were chosen in last year's Congressional Arts competition.

The painting was pulled down last Friday by Republican Rep. Duncan Hunter of California, but Rep. William Lacy Clay, D-Mo., held a rehanging ceremony for the painting this past Tuesday.

Clay has tried to rehang the painting three times.

"This is really not about a student art competition anymore. It's about defending the Constitution," Clay said.

"It's not about the First Amendment. It's about the rules of the Capitol," Hunter told CNN. "The art competition rules do not allow for this type of painting," which he says is "offensive."

Congressman Dave Reichert, R-Wash., is asking the Architect of the Capitol to decide whether or not it should be displayed.

According to NPR, Riechert has been working to improve relations between police and the communities they serve.

He says the painting is in clear violation of the competition's rules and is offensive to law enforcement.

The competition rules state that exhibits "depicting subjects of contemporary political controversy or a sensationalist, or gruesome nature are not allowed."

Reichert adds that he has no desire to censor an individual's right to freedom of speech and expression.