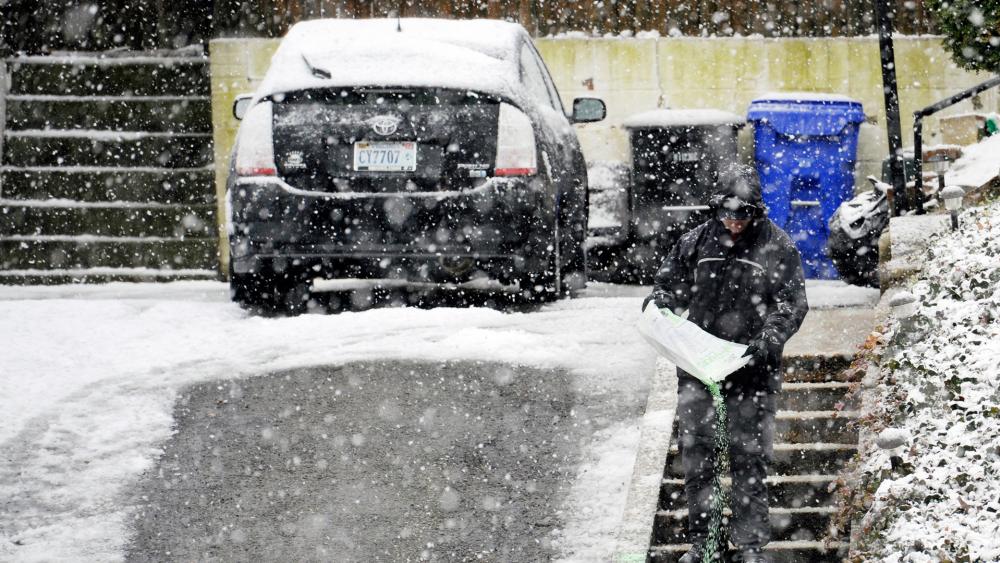 So far, at least three people have been killed including one man whose pickup truck went off the road in Kentucky.

Winter weather advisories have been issued from Alabama to Massachusetts, as well as southern New Hampshire and far eastern Maine, according to Weather.com.

North Carolina cities like Winston-Salem, Greensboro, and Roxboro have been hit hard receiving more than six inches of snow overnight Friday in what started out as a winter mix of rain, ice and sleet eventually turning to snow.

Snowfall totals are expected increase throughout the day Saturday across much of the Mid-Atlantic with chances of more snow on the backside of the storm at nearly 100 percent in some places.

The sleet and ice mixture that started Friday night hammered parts of North Carolina and Virginia creating problems even before the snowfall began.

First reports of power outages began with 21,000 homes and businesses without electricity. That number could rise over the weekend. However, many residents don't seem to be worried.

He and roommate Collin Williams said that if they get snowed in, they would take the opportunity to play their instruments. Collins plays alto saxophone and Cheatham plays drums.

"Practice. We'll get a lot of practice in," Williams said.

Lauren Rathbone, manager of Public Hardware in Durham, North Carolina, said the store sold out of more than 100 sleds Friday, along with bags and bags of ice melt to treat driveways and walks.

Food and other storm necessities sold quickly for Virginia residents, who were preparing for a potential blizzard. Weather forecasters predicted Norfolk and Hampton could receive up to a foot of snow.

The storm did much of the same in the Deep South - maybe not delivering as much snow but creating a mess none-the-less. Travel was especially hit hard as in southern states as flights have been canceled and highways deemed too dangerous to drive.

Nearly 400 flights were canceled Friday at Atlanta's Hartsfield-Jackson International Airport, and another 300 were canceled Saturday morning, according to FlightAware.

Cars were sliding off the road in Fulton County, Georgia because of ice hidden under the snow, WSB-TV reported.

Residents have been told to stay home until the roads are safe to travel.

"If I tell you anything it would be stay home," said Gov. Roy Cooper, describing North Carolina roads as "treacherous." ''Do not go out and drive on the roads unless you absolutely have to."