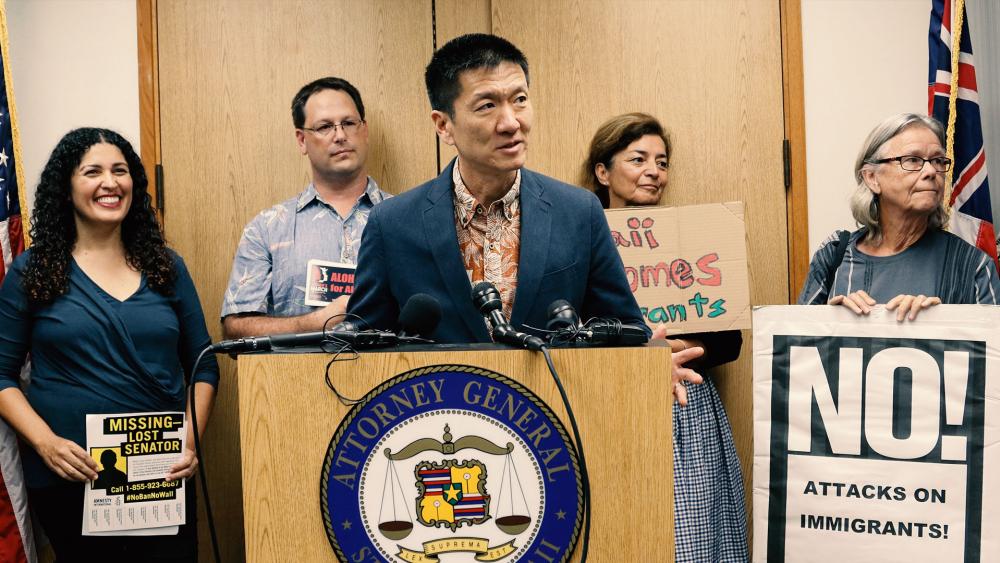 In another setback for President Donald Trump, a federal judge in Hawaii has further weakened his already diluted travel ban by vastly expanding the list of family relationships with U.S. citizens that visa applicants can use to get into the U.S.

The ruling is the latest piece of push back in the fierce fight set off by the ban Trump first attempted in January. It will culminate with arguments in front of the U.S. Supreme Court in October.

The current rules aren't so much an outright ban as a tightening of already-tough visa policies affecting citizens from six Muslim-majority countries: Syria, Sudan, Somalia, Libya, Iran and Yemen. People from those countries who already have visas will be allowed into the country. Only narrow categories of people, including those with relatives named in Thursday's ruling, will be considered for new visas.

U.S. District Judge Derrick Watson on Thursday ordered the government not to enforce the ban on grandparents, grandchildren, brothers-in-law, sisters-in-law, aunts, uncles, nieces, nephews and cousins of people in the United States.

Watson also ruled that the government may not exclude refugees who have formal assurance and promise of placement services from a resettlement agency in the U.S.

The U.S. Supreme Court, which last month allowed a scaled-back version of the ban to go into effect before it hears the case in October, exempted visa applicants from the ban if they can prove a "bona fide" relationship with a U.S. citizen or entity.

The Trump administration defined "bona fide" relationship as those who had a parent, spouse, fiance, son, daughter, son-in-law, daughter-in-law or sibling already in the U.S.

The case came back to Watson when the 9th U.S. Circuit Court of Appeals ruled that he had the authority to interpret the Supreme Court's order and block any violation of it.

Watson's Thursday ruling broadened the definition of what counts as a "bona fide" relationship to include grandparents and the rest of the wider list of relatives.
Hawaii Attorney General Douglas S. Chin, who represents the state as the plaintiff in the case said the court made clear "that the U.S. government may not ignore the scope of the partial travel an as it sees fit."

"Family members have been separated and real people have suffered enough," Chin said in a statement.

The Supreme Court ruled that workers who accepted jobs from American companies, students who enrolled at a U.S. university or lecturers invited to address a U.S. audience would also be exempt.

A relationship created for purposes of avoiding the travel ban would not be acceptable, the justices said.

Trump proposed a blanket ban on Muslims during his campaign, but limited it to a handful of countries when he issued his initial travel ban in January, promoting it as a necessary tool for national security and fighting terrorism.

It set off massive protests at airports around the country and immediately sparked a sprawling, ongoing legal fight.

Courts blocked that first ban as well as a second the Trump administration had retooled, until the Supreme Court partially reinstated it at the end of June.

It's unclear how significantly the new rules have affected or will affect travel. In most of the countries singled out, few people have the means for leisure travel. Those that do already face intensive screenings before being issued visas.
---
Associated Press Writer Andrew Dalton contributed to this story from Los Angeles.