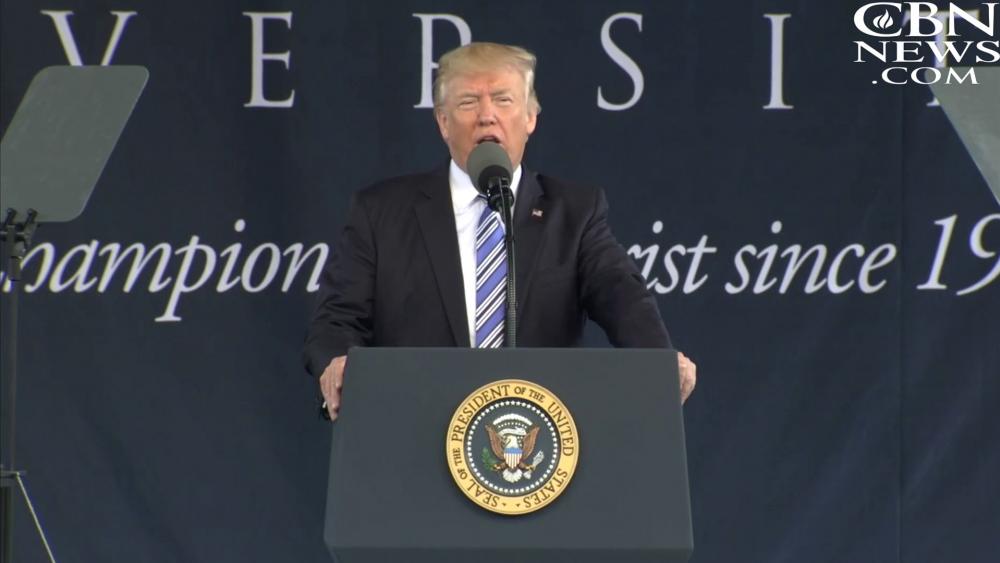 President Donald Trump urged Liberty University students to have courage and boldly live out their faith without fearing critics and the "establishment."

The president delivered the commencement speech to nearly 18,000 students at the country's largest evangelical university.

"To the class of 2017 today you end one chapter, but you are about to begin the greatest adventure of your life. With all of those blessings, and all of the blessings that you've been given, what will you give back to this country? And indeed, to the world?" Trump challenged.

"I'd love to hear him talk to the students about what he plans to do for them to make it a better job market, to make the United States a better place for them to raise their families," Falwell told The Washington Post last week. "And then I'd like him to tell them what he needs them to do to help him make America great again."

That is exactly what Trump did.

He urged graduates to "never give up" and to find the courage to challenge the status quo.

"In my short time in Washington, I've seen firsthand how the system is broken," he said. "A small group of failed voices, who think they know everything …want to tell everybody else how to live."

"But you aren't going to let other people tell you what to believe, especially when you know that you're right. … We don't need a lecture from Washington on how to lead our lives."

He also assured the students that they could live out their faith without any fear of being criticized for their beliefs.

"As long as I'm your president," he said, "no one is ever going to stop you from practicing your faith or preaching what's in your heart.

Trump joins a long list of presidents who have spoken at a college graduation ceremony during their first year in office. Past presidents normally take the opportunity to speak at the University of Notre Dame.

However, Vice President Mike Pence will speak at Notre Dame's graduation, becoming the first vice president to do so.