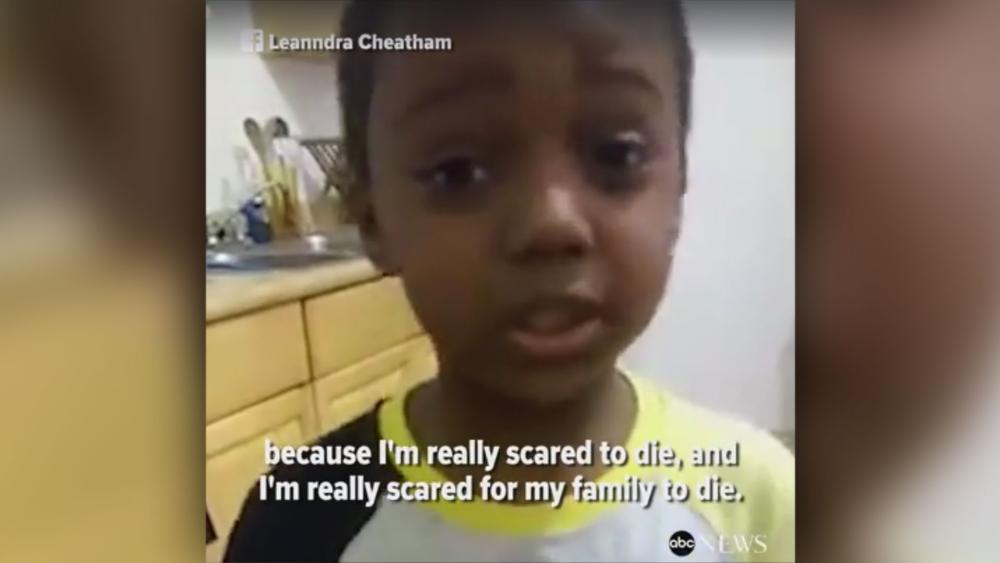 Jeffrey Laney, a kindergartner from St. Louis, has a strong message for adults, "Stop killing each other."

"I'm scared to die," the six-year-old said in a Facebook video that his mother, Leanndra Cheatham, posted on her page.

"I feel bad about people killing each other," he said.

The boy made the emotional plea after his mother's 16-year-old-cousin, Taylor Simpson, was killed in a drive-by shooting last month.

"I didn't know he remembered or even listened when I talked about the death of my cousin."

"All these people are hurting gang killing each other," the young boy says in the video.  "We need to stop this."

He went on to say that as a child, he shouldn't know about such violence.

"Jesus he will help you," said Jeffrey.  "He's gonna help you. He'll make sure you're alright."

"God He love you, all of his heart. God will die for you cause God love you."

Cheatham said she has received mostly positive feedback to her son's video.

"A man in Birmingham reached out to me and told me he didn't shoot someone in retaliation after seeing my son speak in the video," she explained to Fox News.

Gang members have also been impacted by the 6-year-old's powerful plea.

"Saw video & it touched me since I have kids but also very active Crip member with ties for very long time," read a message on her page from a member of the notorious gang The Crips.

Cheatham replied, "U can do it!!! do it for them!!! It will get hard but it's nothing but the devil don't let him Win..Let your kids win!!!"

"Just been CRIPPIN since I was 11 & now 43 I know that life more than any other," the gang member responded.

Cheatham said she often posts videos of her son's inspirational messages online, but she admitted that his latest one teaches a valuable lesson for all.

"I film my son a lot, if you look at my Facebook," Cheatham said. "But this time, I learned a lot about Jeffrey from that video."

Meanwhile, Jeffrey is trusting that he will be protected.