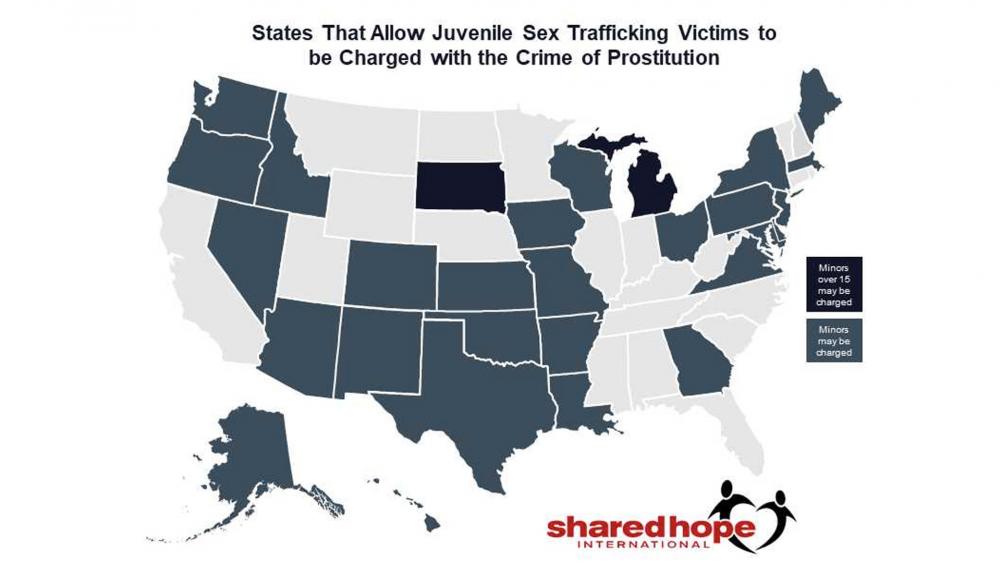 Linda Smith has fought against child sex trafficking for close to 20 years and says it shocks her that 27 states still allow children to be charged as prostitutes.

"No little kid grows up saying, 'When I grow up I want to be a prostitute,'" says Smith, the founder of Shared Hope International. "These are victims of crime and we do not charge victims of crime with the crime committed against them."

Federal law agrees with Smith. Not only does it not charge children with the crime of prostitution, the Trafficking Victims Protection Act makes the sex trafficking of any child a crime.

The Department of Justice explains "no child is immune to becoming a victim of child sex trafficking...and every child involved in this form of commercial sexual exploitation is a victim."

Smith says the problem with many state laws is that police can arrest children who are forced into the sex trade. That allows officers to strip search and even cavity search them, which only reenforces what the traffickers tell them: they are bad people and no one will support or help them.

You can see from the map below which states treat some child victims like criminals. Children arrested for prostitution can also suffer long-term consequences. Juvenile delinquency records can lead to school suspensions or expulsion and prevent survivors from receiving scholarships. Later in life they can face employment barriers such as the denial of professional licenses or the prevention of working with children or joining the military.

Such realities are the reason Shared Hope, a Washington, D.C.-based non-profit, says its goal for 2018 is to abolish these laws.

The organization released its annual Protected Innocence Challenge Report Card Wednesday. Nine states improved their grades in 2017 with Tennessee leading the pack. Smith says the states' national average has risen by 23 points since the organization started its grading system in 2011.

Some of the biggest advances have come in laws that criminalize buyers of commercial sex. Smith says victim restoration is still a big need in most states.

Smith says she fears that traffickers are targeting younger children. She and other advocates are discovering many victims who were first exploited as young as 10 or 11.

Smith says no child should be blamed for being sexually exploited. "Maybe they made a wrong decision," she told CBN News, "but they didn't choose to be sold to several men a day for commercial sex."