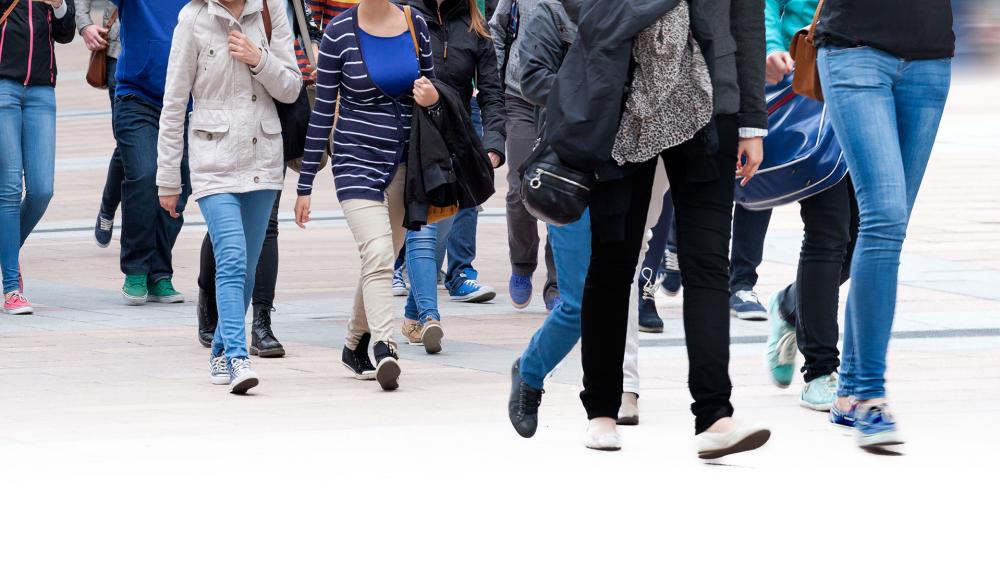 People Walking
New research out of Minnesota suggests that more teenagers than previously thought are using "non-traditional gender terms" to self-identify.
The American Academy of Pediatrics published the findings on Monday.
The study looked at approximately 81,000 ninth and eleventh grade students in Minnesota. It found that nearly three-percent are transgender or gender nonconforming, meaning they choose not to self-identify with the gender they were born with.
Experts say the statewide study can be used to estimate the number of transgender teens in those grades across the whole United States, which would mean numbers are up from a UCLA study last year that estimated only 0.7 percent of 13-to-17-year-olds consider themselves transgender.
The study also found that those same students who claimed transgender also reported worse mental and physical health than other kids.
Dr. Michelle Cretella, president of the American College of Pediatricians, says this is not an isolated finding.
Dr. Cretella told CBN News the reason transgenderism is on the rise is due to it being marketed to children and teens.
"They're claiming that, 'Oh, it's safer now' and saying that they were always thinking and feeling this way but now it's just safer for them to come out, but that's not it," Cretella explains.
"It's more like the promotion of transgenderism as an identity is capturing the attention of troubled teens and they're latching onto this going, 'Yes, this is where I fit in'," she said.
Previous studies through the years have shown early exposure to sex, violence, cigarrettes and alcohol through varying media platforms has a long-term and negative affect on children.
For instance, the American Psychological Association conducted a study and found that early exposure to media violence is a contributing factor to the development of aggression in adulthood.
Also, in 2009, the Washington Post reported that research from Children's Hospital Boston found that 6-to-8-year-olds who watch adult content on TV are more likely to have sex when they're 12 to 14 years old.
And again, another study published in Pediatrics found that the advertisements of tobacco and alcohol are a major factor in the onset of adolescent use of these products.
It's in this same fashion, Dr. Cretella says, transgenderism is being highlighted to today's youth.
"It's an element of social contagion," she said.
"Every teenager struggles with self acceptance at different levels... and because we understand this, as a culture, we do things like avoid marketing tobacco products or alcohol products to kids. Why? Because when kids see their favorite person in Hollywood doing it, they want to do it. And this is what's going on with transgenderism, it's being marketed as cool and chic," Cretella explains.
From the moment of fertilization, science shows that sex chromosomes determine whether the baby will be a boy or a girl – a combination of XY chromosomes results in a boy baby, while a combination of XX chromosomes is a girl.
The website for the Centers for Disease Control and Prevention (CDC) states that gender identity refers to "one's internal understanding of one's own gender."
Dr. Cretella says this use of the term "gender" has morphed overtime as people began replacing the word "sex" with "gender."
"Gender as a word has basically been weaponized to engineer society," she explains. "In the 21st century we have suddenly come up with over 60 different genders and the word has become meaningless. It has always meant male or female."
"Our sex is binary," Dr. Cretella said. "It's an objective biological trait, and that's what we need to get back to. Thoughts and how we perceive ourselves are not hardwired by biology and can be correct and incorrect."
She continues, "We have to measure the normalcy of our thoughts and thinking against physical reality. Transgenderism is a problem with the mind, not a problem with the body."
Some psychologists are calling it "rapid onset gender dysphoria" –  where at times of distress, like the divorce of parents, teenagers will suddenly become depressed or anxious and then "come out" as transgender.
"Those who are claiming they are transgender are physiologically and biologically normal, their hormones are normal, their genes are normal... but what is possible, is for some people to be born with a temperament that is vulnerable to developing this confusion. Transgender beliefs come about as a combination of what's in your environment and perhaps your vulnerable temperament, " Dr. Cretella explains.
So why aren't doctors and psychiatrists across the nation all on the same page?
"Political ideology has taken over science and healthcare," Dr. Cretella says.
Dr. Cretella believes most doctors don't agree with transgenderism but fear of retribution has prevented them from speaking out. Or, she says, they just simply have not done the research.
"Most are busy with their practices and patients, they don't have time to research this topic on their own and are unaware of the dangers of puberty blockers and the politics of how this became the new standard of care," she said.
Dr. Cretella says the fact of the matter is, the more children are exposed to transgenderism as the norm, the more children and teenagers will begin to latch onto the transgender identity.
As the movement continues to grow, psychologists like Lisa Marchiano, are working with families and teens to overcome the negative aspects of their lives that are prompting them to turn to transgenderism.
In her blog, Marchiano gives guidance to parents whose teenagers suddenly begin to identify as transgender and gives suggestions on how to tackle and respond to the situation.
She writes, "Parents are often told that they need to affirm their child's self-diagnosis, and sometimes are encouraged to allow medical transition right away. In reality, there is a paucity of research about transition outcomes for young people. The trend to affirm and transition children and teens with rapid onset dysphoria is not supported by science at this time, however professionals are not offering much in the way of alternative treatment options."