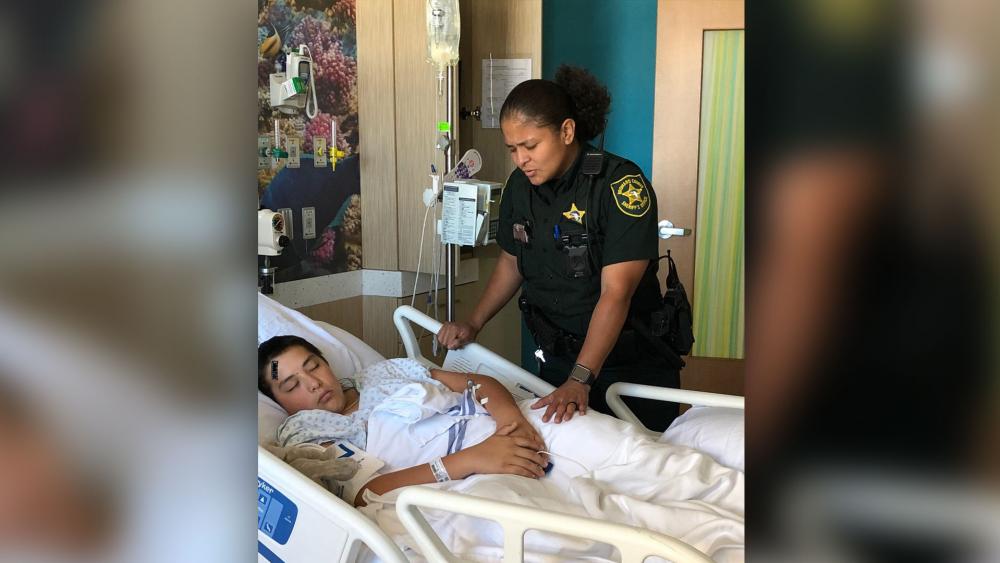 Deputy Brenda Louis
In the wake of one of the worst school shootings in recent history, social media has become plastered with images, comments, and thoughts on how "prayers aren't working anymore." But one Florida deputy, whose image went viral, says otherwise.
Broward County Sheriff Deputy Brenda Louis was assigned to the floor of the hospital where 15-year-old Kyle Laman was recovering from surgery after surviving the Feb. 14 shooting at Marjory Stoneman High School in Florida.
According to USA Today, Louis ended up waiting with the Laman family while the doctors operated on Kyle's leg where a bullet tore through his ankle and foot.
She said, "They told me how scared they were and how blessed they felt because Kyle survived, but they were also so sad because other kids didn't. I told them I couldn't imagine being in their shoes because I have a 16-year-old."
When Kyle got out of surgery, Louis said she felt a pull on her heart to pray for him and asked the family if they would allow her to lead them in prayer.
Louis told WPLG News, that then her sister texted her saying, "You need to pray for these kids, you are placed there for a reason."
"I asked God to choose my words. I didn't want the words to come from me, I wanted them to come directly from God," Louis said.
Louis says she put her hand on Kyle's leg, closed her eyes and prayed for healing for Kyle and all the families who lost loved ones in the shooting.
The powerful moment was captured in a photo that has now gone viral.
"I just believe prayer is very powerful," Louis says. "It's going to be hard, I guarantee you that it's going to be hard. Just prayer and knowing that God is there, they're going to get through it."
Louis says while she keeps hearing a lot about how prayer isn't working anymore, she disagrees.
"I respect everyone's opinions and faiths and beliefs," she told USA Today. "But prayer is my number one weapon."
She continued, "I have a gun, I have a badge, but my number one weapon that I use on a daily basis whether I'm at work or not is prayer."
According to WPGL, Louis has yet to actually speak with Kyle, but she plans to meet him and hug him and pray with him again.
Kyle has been posting updates to his Instagram as he is facing a long recovery ahead, but he says, "I will be okay."

A GoFundMe account has been started in his name in an effort to help with medical expenses.
CBN News Email Updates