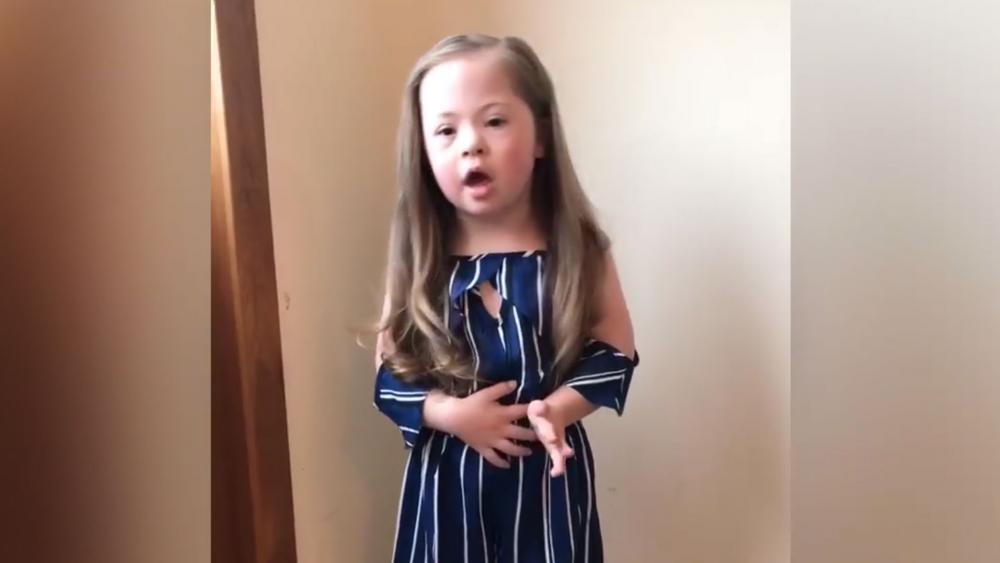 People around the world are responding to a video by five-year-old Chloe Lennon promoting awareness of Down Syndrome.

Chloe's mom, Jade from Irving, North Ayrshire, Scotland, posted the video on Facebook to inform people about Down Syndrome Awareness Day on March 21.

"With Down Syndrome awareness day just over a week away, Chloe has a little message for everyone," she says in her post.

Jade said a pregnant woman in the U.S. who was told that her baby had Down syndrome, was so moved by the video that she has changed her mind about terminating the pregnancy.

The video shows Chloe, wearing a pretty blue and white striped dress and delivering her message.

"Hi everyone. My name's Chloe. I am five-years-old. Down Syndrome awareness day is on the 21st of March. Please wear odd socks to celebrate.  Have a good day, Bye!"

Chloe ends the 27-second video by blowing a kiss to the camera.

The reference to wearing odd socks is the #LotsOfSocks campaign sponsored by World Down Syndrome Day.  It encourages people to wear brightly colored socks, long socks, printed socks, one sock or even three socks for three chromosomes, because people with Down syndrome have an extra chromosome.

Chloe's video has been viewed more than 10 million times and has nearly 400,000 shares from around the world.

Jade told BBC Scotland the response has been "overwhelming."

Patricia Tegerstrand wrote, "God's beautiful children, may he bless each and everyone of them. They are so special."

"A gift from God! I shall do what you asked spread the word," wrote Deborah Kempton.

In her BBC interview, Jade said she hopes the video changes people's perceptions about Down syndrome.

"Chloe is just like any other five-year-old and it is heartbreaking when people take one look at her and assume she is not intelligent and she is not capable," she said.  "She is capable, as are all people with Down syndrome."

CBN News reached out to Chloe's Mom for an interview but at the publication of this article had not heard back from her.