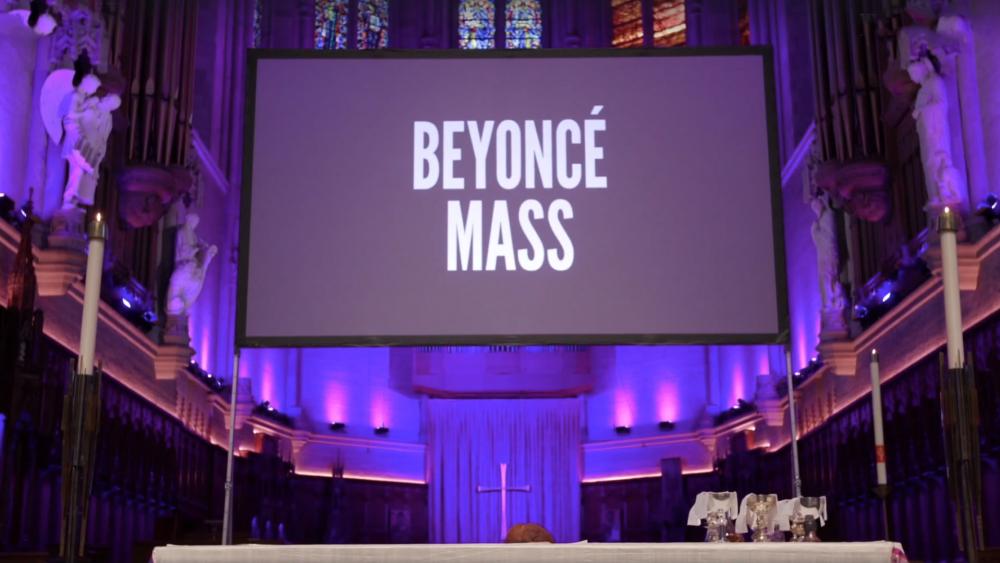 Beyonce Mass
A church in San Francisco, California is raising eyebrows with an unlikely event they are calling a "Beyoncé Mass."
With hundreds in attendance, Grace Cathedral Church says the event is a chance for people to find God through secular music. Others calling it "evil," saying they're trying to substitute Jesus with Beyoncé.
In the Facebook video, the congregation is seen leading worship to a set of Beyoncé songs, while the crowd dances, sings and raises their hands to the tunes.
"We have a community that is youthful and loving and looks to the world as a partner, not an enemy," Reverand Jude Harmon said speaking to the crowd.
Harmon says mostly in attendance are people of color and the LGBT community, including, "People on who other people's narratives have been projected. Just to be honest, the church hasn't been the best about lifting up those voices."
To take things a step further, Rev. Harmon goes on to say that Beyoncé is "a better theologian than many of the pastors and priests in the church today."
"That is not an exageration," Harmon states.
The video includes examples of Beyoncé's "religious symbolism" in her music and performances, from dressing as African deity's, the Virgin Mary, and scenes in her videos that reference the Last Supper.
The event's organizer, Rev. Yolanda Norton, told ABC7 News she uses Beyonce as a way to bring diverse groups together to talk about God.
Norton is an Assistant Professor of Old Testament at San Francisco Theological Seminary who teaches a class she calls, "Beyoncé and the Hebrew Bible."
"People think we're worshipping Beyoncé, none of that is true," she said. "This is a way to have different kinds of conversation."
During the service, Norton said in a separate interview, they use lyric's from Beyoncé's songs as examples of what the crowd's prayers to God could be. She said the service focuses on empowering women of color and other minority communities.
"I've been asked time and time again, 'Why Beyoncé?'" Norton preached to the crowd during the mass. "I believe she reminds us that you have to do your thing your way, you don't do it on demand, you don't do it for your oppressor, you don't sing when they want you to sing...you sing when God calls you to sing."
Many angry commentors took to Facebook in response to the mass writing, "Only Satan could mislead and deceive at this level!"
Others saying, "We're trying everything but Jesus to get people to Jesus."
Many even pointing out parts of scripture that they say rebuke this type of gathering, including 2 Timothy 4:3-4 and Galatians 1:8.
2 Timothy 4:3-4 reads:
"For the time will come when people will not put up with sound doctrine. Instead, to suit their own desires, they will gather around them a great number of teachers to say what their itching ears want to hear. They will turn their ears away from the truth and turn aside to myths."
Galatians 1:8 reads:
"Let God's curse fall on anyone, including us or even an angel from heaven, who preaches a different kind of Good News than the one we preached to you."