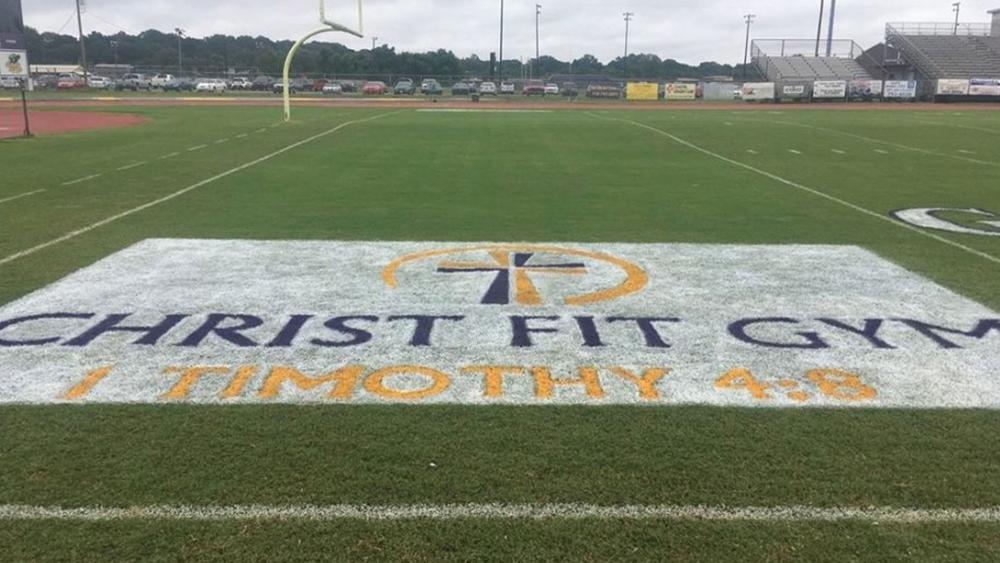 A Louisiana high school has decided to put the logo of a Christian gym back on its football field after removing it because it referenced the Bible.

Billy Weatherall, the owner of Christ Fit Gym paid the Benton High Booster Club $3,500 dollars to put his logo on the field. It featured the words "Christ Fit Gym," a cross, and the verse reference, 1 Timothy 4:8.

Even though it was supposed to stay up for the entire 2018-19 football season, the school ordered two students to paint over the logo after receiving a complaint about its biblical reference.

Weatherall told the Todd Starnes Radio Show that he had a "signed contract" with the school.

"I got a phone call from a school official Friday morning while I was having my quiet time and drinking coffee," Weatherall explained. "He said they were instructed to paint over the cross and he was devastated about it."

The school district is currently fighting a federal lawsuit from Americans United for the Separation of Church and State. They filed the lawsuit in February after multiple people accused the school district of promoting Christianity at school events. When they saw Christ Fit Gym's logo on the football field, they complained again.

That didn't stop Weatherall from fighting for faith.

He filed a temporary restraining order against the Benton Football Booster Club to prohibit anyone from removing the logo. However, it was too late and had already been removed

The school board discussed the issue and voted to re-paint advertisements for the gym on the Benton High School football field.

"The vote was unanimous, the logo is going back on the field. A huge thank you to this community for standing behind what is right. God always wins!!!" Weatherall said in a Facebook post.

Meanwhile, Americans United for the Separation of Church and State condemned the district's decision regarding the logo and will continue to pursue its federal lawsuit.