'I Was One Block Away From Killing Myself': Woman Chooses Life After Seeing Man Carrying Cross 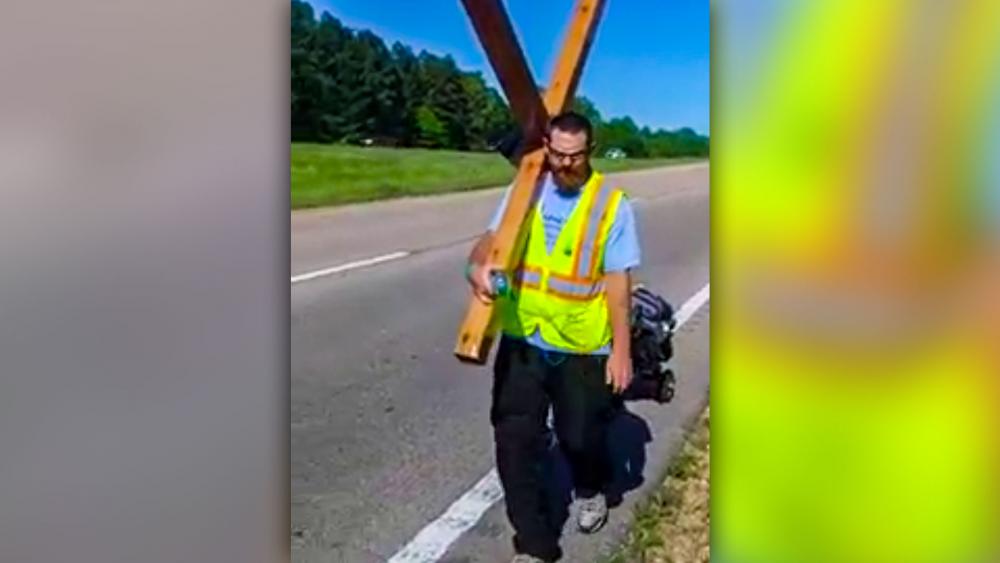 Acie Burleson is carrying a cross from South Carolina to the Grand Canyon (Photo: screen capture)

When Acie Burleson encountered Jesus Christ as his Savior, he learned about the biblical command to deny himself, take up his cross, and follow the Lord as Matthew 16:24 states. Years later, he says he's heard from God and has started a journey to literally carry the cross all the way to the Grand Canyon.

"The moment that I gave my life to God, my life was radically changed, and that's what makes this walk kind of easy -- is Jesus," Burleson shared in a recent video on Facebook. "Jesus is amazing."

The 34-year-old has left his home in Andrews, South Carolina, and since March 11th he's been traveling from town to town on back roads carrying a wooden cross he built.

"Anything to help get God's word out," Burleson said, waving at drivers.

"When I got saved, God called me out to be a walking memorial for him," he said. "I've never done a long distance like this before. Most of the time it was just town to town. This is the big one. I'm going all out."

Since the start of his journey, he has been sharing the gospel of Christ along the way, telling people to "pray and be ready for the coming of Christ."

Burleson predicts it will take three months to get to the Grand Canyon. He carries a small tent with him, but he's met so many generous people and churches along the way that he hasn't had to use it.

He has multiple stories of miracles so far, including a woman being saved from suicide.

"There was a woman driving and she was just looking at me, so I waved like 'Hello' and kept walking. She then cut me off and is just falling out of her window weeping and crying," Burleson told the Carolina News and Reporter.

"Just like that, crying, and I was like, 'Oh my gosh what's wrong? What happened? Are you alright?' and she said, 'I was one block away from killing myself and you stopped me'," he continued.

He's glad he obeyed God because he almost didn't carry his cross that day. But thanks to his wife and kids supporting him, he decided to walk, and that's when he encountered the woman.

"I wasn't going to walk that day," he said. "I didn't feel like it, and my wife encouraged me to get up and go."

Burleson says others have stopped and prayed with him alongside the road too.

"One guy turned his car around and immediately started trembling and tearing up when he approached me," Burleson said. "God knew he needed that that day."